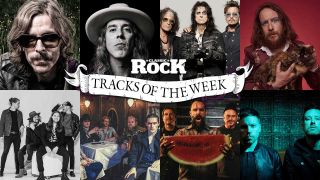 You want new music? Like, good new music? We’ve got tonnes of the stuff right here; lavish Scandi storytellers, buzzy young things, the ‘godfather of spaghetti rock’, a brilliant cover of a Creedence Clearwater Revival classic...and much more besides. As ever, the winner will be chosen by YOU (using the poll at the foot of this page), so let’s start by seeing who won the vote last week:

1. The Struts - Somebody New

Congratulations to the Struts, whose stripped-back piano n’ vocals reworking of Somebody New secured them first prize. And very well played also to Palaye Royale and The Cadillac Three on first-rate second and third place tunes. Now, tune into this week’s shortlist and vote for your favourite, right after a victory spin of last week’s winners...

One of our favourite tracks from Opeth’s luxurious latest LP, In Cauda Venenum. Translated in English as Universal Truth, the accompanying video by animator Jess Cope (you may recognise her haunting, deeply stirring style from work with Steven Wilson) follows “a melancholic and bitter man on the brink of self-destruction and insanity as he delves into a sinister alternate world as reality crumbles around him.”

Often the simplest ingredients, exquisitely executed, are all you need. Ryan Hamilton understands this better than most, as this ballad – set to a touching montage of vignettes from past bands and relationships – proves. Expect plaintive piano, sumptuous strings and a tear-jerking pop melody in this evocatively autumnal affair that looks back in bittersweet gratitude.

Hollywood Vampires - I Want My Now

One of the most super of supergroups – led by Alice Cooper, Johnny Depp and Joe Perry – strikes gold with this groovy shot of rock’n’roll. Punctuated by such wry snarls as ‘I want some gold, I want a brick, I want a diamond selfie stick’, it’s a driving slab of dirt and decadence, and part of a record that proves they can write tunes as well as emulate the classics.

If you enjoy the machine-gun sugar of the Hives and Royal Republic, and you don’t already know Roman Nervoso, we suggest you rectify that now. The Belgian rock’n’roller, hip-wiggler and self-proclaimed ‘Godfather of Spaghetti Rock’ is celebrating his tenth anniversary with this buzzing, toe-tapping blast of jutting guitars, Danko Jones vocals and glittery eyeshadow.

We first heard these guys via their fret-fizzing 'choon Get It Together. Now they’re gearing up for the next phase of their assault with this new single. Old-school and millennial-era sounds fuse together in a tasty marriage of 90s alt.rock and Britrock – complete with the kind of ‘ahhh-ah-uhhh-ah-uhhhh’ chorus refrain beloved by graduating classes of the 00s/’10s all over the UK. Like what you hear? They’re on tour in February, and have more music coming in the new year.

If you enjoy the music of Jim Jones and Rosalie Cunningham, and like the idea of them mashed together at some sort of oddball punk club (yes it’s a curious scenario, but bear with us…), this gaggle of Yorkshire garage rockers are for you. This new single starts out all sweet n’ stompy before opening out into a colossal call-to-arms chorus.

Not a ‘new’ track, but a new cover that you most definitely need in your life. I mean, it’s Clutch doing a Creedence classic... Two bands whose music actually sounds bearded. Neil Fallon sounds completely at home with John Fogerty’s roaring swamp-soul vocals, and Tim Sult pays homage to Jack Flanagan – Clutch’s manager, who passed away in October – by playing Jack’s beloved 90s Les Paul. A perfect tribute.

We’ll leave you with the punch new single from Leeds duo No Fit State. With roots in classics of the 70s and 00s (Zeppelin, the White Stripes, Black Keys etc etc) plus slick contemporary sensibilities and a flutter of angst, it’s taken from their self-titled debut. Catch them on the road with Broken Witt Rebels this month.