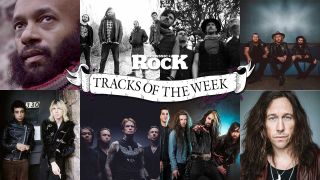 Welcome folks to the latest edition of Classic Rock's Tracks Of The Week, where we comb through rock's newest offerings (from veterans and newbies alike) and leave you with only the tastiest. There can only be one winner, however, and it's chosen by YOU.

Every week we love to see what you enjoy the most, and last week was no exception: flippin' tonnes of you voted in our poll, leaving the following bands in your top three...

2. Stone Broken – The Only Thing I Need

Congratulations Bishop Gunn, who triumphed by an impressive margin. And bravo to second and third places Stone Broken and Dead Man's Whiskey, who both won over hefty numbers. Now sit back and enjoy this week's selection, before voting for your favourite at the foot of this page. But first, another spin of the gorgeous track from last week's champions, Making It. Enjoy...

Fresh from his victory at the Grammys (where he won Best Contemporary Blues Album), it’s the frenetic new video from blues-mashing maverick Fantastic Negrito – shot in Milan in a whirlwind of sweaty gigs, snazzy jackets and moody close-ups. One of the most brooding moments on the superb Please Don’t Be Dead, A Boy Named Andrew mixes roots, world, blues and hip hop tones into one smart, thought-provoking vignette.

Quietly peddling gritty infusions of hard alt rock, grunge and Southern sounds for the last decade, the foursome from Athens, GA, are on venomous form on new album Voodoo – from which this hooky highlight is taken. The full LP is out on 22 February; be sure to check it out if you like what you hear here...

Back to this side of the pond now (though a good portion of it might as well still be somewhere south of the Mason-Dixon line, in a good way) with Essex rockers Hatfield Rising. A meaty, spirited nod to Canvey Island and its most famous sons Dr Feelgood, it’s got the kind of chorus hook that would get sweaty summer festival crowds singing along in a heartbeat. Not a bad shot of warmth for winter, either...

Wolf Jaw – I Lose My Mind

Thinking that voice sounds familiar? You may have heard it through these Midlands rockers’ former guise The Bad Flowers. Now rebranded as Wolf Jaw, they’re a heavier, gnarlier proposition, adding slabs of modern, beefy alt rock to their blues rock foundations. Based on this oomphy, bright-eyed new single, we’d say it was a smart move. Keep an eye out for more...

Beechwood – I Can’t Stop It

Trashy, sexy garage rock’n’roll noise from New York now, complete with stabbing bluesy hook and psychy haziness, Taken from their fittingly titled debut album Trash Glamour – originally written in 2013, when bandmates Gordon Lawrence and Isa Tineo were still teenagers hooked on the Stones and the Stooges – which is out now.

The title track from Josh Todd and co’s upcoming new album is a pounding shot of AC/DC-meets-GN’R hard rock. It had us right from that come-hither guitar hook in the first verse, and kept us smiling and head-bobbing at our desk to the end. Like it? Find this and more on the full album, which comes out on March 8.

Like a bit of old-school Bon Jovi? Got a soft spot for the more sugary end of Def Leppard? You'll enjoy this. A slick favourite from Collateral's EP Four Shots that's been remixed by Romesh Dodangoda (Bring Me The Horizon, Stone Broken), it comes with a megawatt chorus, wolf-whistles and gleefully shameless cliches about the 'Midnight Queen' they're so smitten over. Their full-length debut is due later this year...

We’ll leave you with a big ‘ol slab of boogieing blues rock, courtesy of UK singer/songwriter Matt Mitchell (formerly of Colour Of Noise and Furyon), bolstered by organ blasts and a chunky, dirty yet highly more-ish riff. A rocking end to a rocking start to a (hopefully) rocking week. Or something. Either way, enjoy!