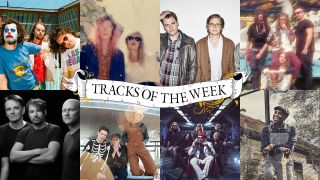 You want new music? We got new music, baby – GOOD new music. From the new Deap Vally track to some delicious fresh blues from Buddy Guy and a whole bunch of other good stuff, we reckon there's something in there for everyone. Tonnes of you voted in last week's poll, and below are the artistes/songs that made your top three (in reverse order):

Congratulations to The Darkness! And huge thanks to everyone who voted. Now, let's see who you rate the highest this week, once you've had another spin of last week's first prize-winning track Solid Gold. Bon appetit...

We've got a humdinger of a tune to kick things off this week, courtesy of these guys from Austin, Texas. It's a bit Americana-indie, a bit glam, a bit Southern, a bit pop, but basically all rock'n'roll – and we like it. It Might Get Dark is a deceptive title; 'It Might Get Nice And Sunny' may've been more fitting, but at least the former is intriguing. Check out more on new album, Performance, when it hits shelves on August 24th.

We loved Deap Vally's last record, Femejism, so were delighted when this new track cropped up on our radar this week – and even more so to discover that it's a quality shot of noise. Coming in at under two minutes, it's a fresh, frenetic blast of surfy, garage-blues rock'n'roll that's over before you know it; but leaves you gagging for more. Catch the LA-based duo on tour in the UK and Europe through June and July.

The new record from Central Virginia brothers Sons Of Bill (the wonderfully titled Oh God Ma'am) is billed in its press release as "equal parts post-adolescent anxiety and old-soul humility - literate, gorgeous, and darkly contemplative". Judging by Firebird 85's blend of Springsteen-tinged melancholia, West Coast-y dreaminess and contemporary atmospheric breathing space, it's justified praise. A soaring, contemplative brand of Americana that feels genuinely current even as it affectionately nods to the past

Next up we've got four London boys making a good ol' riffy racket and dancing around in Trump/May/Putin masks – AKA rock'n'roll foursome Pink Cigar with a slice of their new album. "The future isn't bright it's just a bloodstained flag," they sing, though the swaggering, upbeat scuzziness at work suggests they're still basically very up for a party. Lyrics are politically charged in a sneery, spiky sort of way, but it's the fuzzed-up, catchy joie de vivre of the chorus (think Blur at their most punky) and attitude laden guitar hook that really works here.

The Pineapple Thief – Far Below

Bruce Soord and his Somerset brigade of progressive rockers are back with their second album to feature Gavin Harrison (virtuosic sticksman with the likes of Porcupine Tree and the latter-day King Crimson), and this is the first proper taste. And guess what? It's really rather good. Blending rocked up weight with Soord's broodingly atmospheric vocals and Porcupine Tree-nodding knarliness, it's piqued our appetite for the full record, titled Dissolution.

The Dirty Nil – Bathed In Light

Steadily gathering momentum since their first release in 2011 – picking up opening slots with The Who, Against Me and Billy Talent along the way – these Canadian rockers have learned how to "put on a proper fucking rock show". What's more, they've managed to convert that zingy live oomph into their recorded tunes, as this more-ish, scuzzy slice of punk-edged rock'n'roll affirms. Top stuff.

The Night Flight Orchestra – Lovers In The Rain

Now for some 80s-tastic synths. Ok, a LOT of 80s-tastic synths – and soaring guitars, and a ridiculously catchy chorus. The Night Flight Orchestra might have been born out of metal (its members come from the Soilwork and Arch Enemy camps, among others) but their own work is all rousing, nostalgic, hands-in-the-air-like-you-just-don't-care rock – and this synth-twiddling power ballad suggests they're not running out of steam any time soon. Check out their new album, Sometimes The World Ain't Enough, which goes on sale June 29th.

Buddy Guy is 81. 81. Christ, if we could play guitar and sing the blues with the level of richness he pulls off here at that age, we'd be damn happy. Taken from new album The Blues Is Alive And Well (featuring appearances from Keith Richards and Jeff Beck), this makes a wonderfully suave addition to this week's round-up. Yes it's basically very traditional 12-bar 'woke-up-this-morning' blues, but delivered with this kind of energy, conviction and and class...well, it just works.