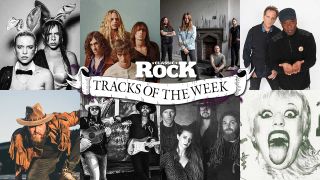 Welcome, one and all, to Classic Rock’s Tracks Of The Week. Whether you’re a TOTW regular or popping in for the first time, we hope that there’s something to tickle your tastebuds in our slap-up selection platter of new rock’n’roll prime cuts. A record number of you voted in last week’s poll, and below are the results:

1. Alter Bridge - Wouldn’t You Rather

Congratulations to Alter Bridge, who racked up a massive winning total! Very well played also to Kris Barras and L.A. Edwards who’ve clearly turned a lot of heads if their impressive second and third place results are anything to go by. Now, check out the guys and girls we’ve got in store for you this week, then vote for your favourite at the foot of this page. But first a victory spin for Myles, Mark and co...

This fearsome jolt of heavy industrial vibes, electronics and buzzsaw guitar chops is the doing of singer Rosie Bones and guitarist Carmen Vandenberg. You may recognise them from Jeff Beck's band, but Choke (taken from their self-titled album, which is out this week) is very much their own seductive monster – rock'n'roll, for sure, but not as you know it.

Mini Simmons - A Way With Murder

Now for something way more retro. These Kiwis' self-titled album is out this week, so we're celebrating with this warm, rosy highlight – a sun-kissed bath of gorgeous harmonies, raffish outifts and 70s hippie sensibilities. If you enjoy the immaculately executed nostalgia of The Sheepdogs, you'll love this.

Jailbirds - Thrill Of The Chase

Jumping onto the same Aussie party bus as Airbourne, The Lazys and the like are these rabble-rousing beardos. Well, they're part Irish as well, but those bands are writ large across this new single (along with harmonised streaks of Thin Lizzy, the ballsiness of Rose Tattoo and more). They describe it as "pure, unadulterated rock n' fucking roll", which sounds pretty bang on.

Stevie D feat. Corey Glover - Your Time Has Run Out

Stephen DeAcutis (aka guitarist/producer/engineer-and-more Stevie D) joins forces with Living Colour's Corey Glover for this groovy, balls-to-the-wall slab of hard-ass rock'n'roll. Like what you hear? Check out more on their upcoming album Torn From The Pages.

Originally the drumming half of Royal Blood (back when the duo were based in his native Australia), Matt Swan is the mastermind behind this dirty hit of ferocious biker rock. Clearly the only thing to do while listening to music like this is tear off on a motorbike with someone attractive, then fly a plane, and then leap out of said plane. Which he does, as you'll see in the video here.

The Allman Betts Band - All Night

The offspring of southern rock royalty, to say that Devon Allman and Duane Betts (i.e. sons of Gregg Allman and Dickey Betts) had big shoes to fill would be something of an understatement. Happily they make good on the promise of their heritage with this rich, stylish dose of blues rock – and most pleasingly of all, it sounds like them (though naturally their dads work their way in too, and that's fine by us).

Bourbon House - Devil On My Heels

Expect delicious spadefuls of Heart, Led Zeppelin and Janis Joplin with this gnarly blues rock number from Wisconsin rockers Bourbon House. Spearheaded by smoky-yet-strident siren Lacey Crowe, it's the kind of music that doesn't know whether to flirt with you or kick you in the teeth – and we mean that in a good way.

Amyl & The Sniffers - Some Mutts (Can’t Be Muzzled)

We'll leave you today with some shouty nostalgic punk'n'roll from Aussie noiseniks Amyl & The Sniffers. Manic, messy and a little unhinged, it's a whack of unadulterated adrenalin for those who like their rock without polish or bullshit.

Have good weeks y'all, and happy voting!