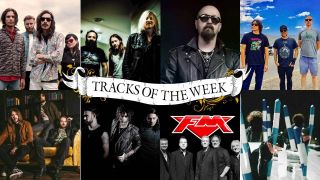 Time for some new tunes to send us all singing/air-guitaring/head-banging into the weekend. We very much enjoyed delving into the selection below, and now it’s time for you to decide which you like best. Last week you voted these guys into your top three, in reverse order:

Well done to all three of them, and how brilliant to see a brand new face like Krishaanu alongside the likes of Adrian Vandenberg and TTM. So which will win you over this week? Have a spin, deliberate, then vote for your favourite at the foot of this page. Once you’ve had another listen to last week’s first prize winners Vandenberg’s MoonKings of course…

These Bristolian misfits have hit a fiery stride with new album The Free Life, from which this sizzling new one (featuring Death From Above’s singer/drummer Sebastien Grainger) is taken. A fierce yet seductive whirlwind of densely fuzzed guitars and head-spinning hoodoo, it’s so cool and colourful we assume it comes with its own entourage and cutting-edge fashion line. Delish.

Palace Of The King – I Am The Storm

An exclusive stream now from Aussie rockers Palace Of The King, of their most ambitious track yet. Sure, there are larynx-stretching hints of their countrymen Wolfmother in here, but a lot more besides. Taken from forthcoming album Get Right With Your Maker, it starts with deliciously moody guitars, before drawing organ, keys and expansive chords into a confident stamp of fresh-faced psychedelia.

Further evidence that Priest have ample rabble-rousing oomph in them yet, in the form of this latest cut from new album Firepower. If you liked Halford and co already, you’ll like this no question. If you didn’t, check it out anyway just in case – it’ll incinerate any snow-induced chilliness if nothing else.

Time for some instrumental good stuff from San Diego trio Earthless, because why bother with singing when you can just jam the hell out of some delicious Sabbath-nodding riffs, bass grooves and vibrant guitar twiddliness? All with a vitality – informed by the band’s fondness for Krautrock and psychedelic Japanese records – that stops it feeling like a tired throwback exercise? Exactly, why indeed.

A beautifully written, sweetly heartsick ode to unrequited love from Massachusetts indie rockers The 27 – blending sun-kissed 60s/70s pop harmonies with rootsy Americana to beguiling effect. In a funny way it made us think of a young The Who (but way less angry), hanging out with The Beach Boys and Crosby Stills Nash & Young. Like the sound of that? Listen in…

Occupying a stylish, attitude-charged place between QOTSA and Royal Blood, this trio from Devon have their sights on big things – or they do if this on point dose of sharp chops and harmonious swagger is anything to go by. Watch out for the full album, Eclipse, which comes out April 13th.

Spielbergs – We Are All Going To Die

As song titles go it’s not the most optimistic, but maybe sometimes that’s the kind of straight-up to-the-pointness we all need. And actually there’s a wide-eyed urgency to this fizzling slab of 21st century rock that’s incredibly uplifting. Moody yes, but rousing with it – more of a ‘we’re all going to die so fuck it let’s live life to the fullest’ statement than a morose sob-fest.