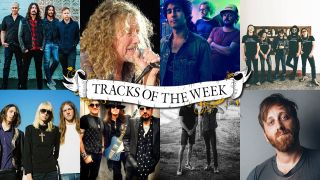 It’s that time of week where we call upon you, noble rock people, to vote for your favourite Track Of The Week – from our delicious mix of icons and first-class newbies. But first let’s look at last week’s winners, in reverse order:

3. Kadavar – Into The Wormhole

So who’s going to be dubbed our Track Of The Week this time? The power lies with you. You know what to do; listen in, listen well, ponder, then VOTE for your favourite. And then go and have a lovely weekend. First of all, however, let’s listen to last week’s champions Mastodon.

A slightly gentler cut from the Foos’ new album – in contrast to previous, more snarly releases Run and The Sky Is A Neighbourhood, anyway – The Line sounds like something huge, happy festival crowds could be swaying along to next summer. ‘It’s amazing!’ some have shouted. ‘No it’s not!’ crieth others. But what do YOU think?

The Led Zeppelin man-turned-folk rocker-turned-Alison Krauss collaborator-turned-blues/world dude is back with a brand new album, and has released a track from it. He’s carried some subtle percussive, world-y infusions from his band the Sensational Space Shifters and mixed them with brooding melody, atmospheric guitars and not-so-thinly-veiled political disenchantment. Nice.

Originally from Wild And Reckless, the musical they staged in their native Portland earlier this year, Rebel adds some dark country undertones to Blitzen Trapper’s cerebral, sun-kissed brand of pop rock. It’s good to have them back.

“Rebel is a song about a guy who for the love of a girl follows in his father’s footsteps only to find it to be a scam,” explains frontman Eric Earley. “After several tries at the American dream he ends up selling cocaine to blue bloods in the Hollywood hills. Something of a lost Raymond Carver story with shambling near-country soundtrack.”

Ahh that happy place where the South meets the seaside, from a group originally assembled as a backing band for singer-songwriters (including Leon Bridges, Shakey Graves, Nikki Lane…). The Texas Gentlemen are from Dallas, but here sound like they’ve taken a detour via the Californian coast – on a pensive sunset drive. You’ll find healthy hints of The Band, Blind Faith and other 70s flavours stirred into Bondurant Women, accompanied by an eccentric video tale of dodgy car salesmen, curious intoxication and brushes with the law.

Starcrawler – Let Her Be

These LA teens have a simple but monstrously catchy riff at the helm of this new shot of youthful aggro. Proper rock with punk aggression, from four kids too young to remember (firsthand) the Stooges n’ Sabbath tones they exude – but no less commanding for it. You’d never guess that stick-thin, blood-spitting singer Arrow De Wilde is rather a sweet and shy soul offstage…

Driving, dirty piece of garagey blues rock from Canadian duo Black Pistol Fire – and yes there are lot of duos like this about at the moment, but based on Lost Cause we’re rather taken with these guys. If Led Zeppelin had jammed with BRMC and The Black Keys, it might’ve sounded like this. Ones to watch out for…

Dan Auerbach – Stand By My Girl

Dan Auerbach – him of The Black Keys and an increasingly burgeoning roster of other projects – has a new solo album (Waiting On A Song), from which this tight, catchy brand of Southern soul is taken. Starring a sweet but murderous housewife with a bald cat (part ‘50s model, part Dr Evil) and nervous husband, the video will entertain you while keeping you on nicely on edge.