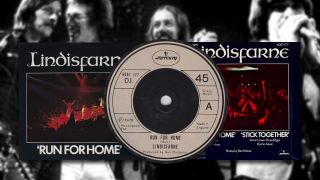 Run For Home was the first Lindisfarne single since All Fall Down in 1972 to chart. And the first since Meet Me On The Corner in 71 to make the Top 10. The band appeared on Top Of The Pops to promote the single, on July 13, 1978. Also on the same show were Renaissance, as well as Suzi Quatro, The Boomtown Rats and Racey.

Where did the inspiration for Run For Home come from?

“It happened when we were in the studio working on the Back And Fourth album. We were waiting for Gus Dudgeon, our producer, to turn up one day, so Alan Hull sat down at the piano and began playing. He had a book of his unused songs lying around, so I flicked through it and came across this one. It looked interesting, so I persuaded him it play it, and it quickly became obvious it was a really good tune.”

“It became our best selling single, even though we had higher charting ones. It just sold a lot of copies over a long period of time.”

“We never thought of ourselves in that way. Even though we did do Top Of The Pops. It was just a song that did well for us, and we took it in our stride. We were never treated like pop stars anyway.”

“It could easily have been a blessing, if we’d followed this up straight sway with another single, making the most of the momentum. But we didn’t, so it never had any long term impact.”