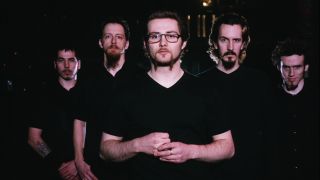 When Earthtone9 split up originally in 2002 there was a barely contained outrage that swept throughout the UK metal underground. How, people asked, could such a unique and challenging band dissolve due to their frustrations at being ignored? Why were inferior bands climbing the ladder of commercial success whilst the Nottingham noisemakers struggled on to diminishing returns?

It’s a good question, but in reality no one should have expected too much from a band who had originally intended to split up before the release of their debut album. With that in mind, it’s fair to consider the legacy of Earthtone9 a success… But, oh, how much more they could have achieved.

In 1998 the band released an album of demo tracks, with a few new additions, paid for with their last £500 and, for all intents and purposes, gave up being in Earthtone9. Then, out of the blue, the reviews for lo-def(inition dischord) began coming in, praising the band’s melodic, progressive take on the dense, ugly noise of bands like Will Haven and Helmet. Suddenly their fire was re-ignited, and Earthtone9 reconsidered their decision to retire and quickly returned to the studio for 1999’s Off Kilter Enhancement, which was arguably even better. The dexterous and scathing riffs of Owen Packard and Joe Thomas, rhythmical ingenuity of drummer Simon Hutchby and, most impressively, the wide and wild vocal range of the enigmatic Karl Middleton were expertly showcased on songs like Grind And Click and I Nagual Eye. In a climate of American nu-metal dominance the band were offering a genuine alternative to ‘doing it all for the nookie.’

With this kind of track record it was only a matter of time before those higher up had to take note of Earthtone9, and the band embarked on a number of high profile tours – almost all of which failed to live up to their promise. Booked to appear alongside Nine Inch Nails at the now defunct London Arena at the Lost Weekend Festival, the band suffered with the rest of the bill as NIN pulled out and left more than a few walk-outs… Thousands of angry, frustrated fans left a sour atmosphere throughout the day as Ash headlined. Earthtone9 still managed to be the main onstage talking point of the event when Middleton performed in nothing but clingfilm trousers to confused onlookers. The band also opened for Soulfly and Glassjaw around Europe, but grew tired of their lack of soundchecks, tiny allotted stage time and the fact that they were going on ten minutes after the doors opened to, often, less than 20 people. It was almost as if they were cursed.

Despite this, the band still had enough in them to release their magnum opus; Arc’Tan’Gent. One of the best albums of its generation, it recalled Tool at their most ambitious, Strapping Young Lad at their most intense and Deftones at their most cerebral. And also threw up a genuine anthem in Tat Twam Asi. It was all set up for another push, but the band had grown tired and, less than a year after the album’s release, Earthtone9 announced a final show at London’s Highbury Garage. It sold out, and the atmosphere at the show ranged from sadness to resentment by those present. It was, they said, another example of the obsession with bland, identikit nu-metal. The fact that Adema headlined the 2000 capacity Astoria a few days later suggested they had a point.

The members of Earthtone9 went their separate ways, only Middleton kept a vague musical profile with his work in The Blueprint. That aside? Silence.

It wasn’t until 2010 that the band announced their intention to reform and ‘remind everyone how good they were’. Their first show was at the UK leg of Sonisphere on July 31st, and showed everyone that they were, in fact, very good indeed. An album, IV, and a Download festival appearance in 2013 have followed since. And while they may never reach the commercial heights that they strived for, deserved, or that many predicted from them – just having Earthone9 around is enough. After all, we nearly didn’t have them at all. Don’t take them for granted this time, eh?