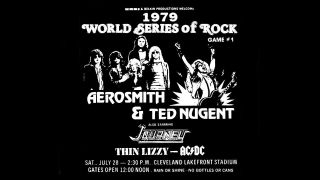 Not since Woodstock had the United States witnessed such a wild, momentous and ultimately deadly showcase of pure rock'n'roll excess.

July 28, 1979 began as a glorious summer day, with some of the biggest bands on the planet assembling for a day-long rock festival in Cleveland, Ohio. By the day’s end however, the stadium grounds lay in shambles, the headliners ripped at each others’ throats and two people lay dead.

Hatched in Cleveland in 1974, the World Series of Rock (“WSOR”) was a series of day-long festivals spread throughout the summer. Talent-wise, it was a very big deal. Held in Cleveland Stadium — home to the Cleveland Indians — the event adopted a baseball theme, with each festival day representing one inning.

1978 featured three innings, with headliners Rolling Stones, E.L.O. and Fleetwood Mac, respectively. The 1979 season kicked off on July 28, boasting an absolutely mouthwatering feast of powerhouse bands, all of whom were enjoying considerable radio play at the time: Boston’s legendary Aerosmith would headline, supported by Ted Nugent, Journey, Thin Lizzy and a heatseeking act from Australia called AC/DC.

The sirens of chaos sounded long before the first band took to the stage. On the eve of the festival, surging throngs of concertgoers amassed outside of the stadium with an eye towards claiming prime real estate when the doors opened in the morning.

Unsurprisingly, Bacchanalian revelry ensued throughout the night and as the hours wore on, local criminal gangs targeted many of the fans who lined the stadium perimeter, unguarded and unprotected. Reports flooded in of gang violence, robberies and theft. In separate incidents, a jaw-dropping five people were shot — one fatally — imbuing the scene with bad vibes and chaotic urgency. It would not be the day’s only fatality.

Over at local station WMMS, Aerosmith turned up for an interview with DJ Denny Sanders. The band were in damage control mode, having cancelled a number of Cleveland gigs in the past (including the cancelation of a make-up gig for a previous cancelation). Aerosmith were badly behind schedule with the release of their forthcoming album, Night In The Ruts and by the tour was plagued with arguments and petty squabbles — troubles which were only amplified by the band’s prodigious appetite for booze and drugs.

Renowned Cleveland DJ John Gorman was in the studio that evening and recalled, “As I walked by the newsroom I heard an unusual commotion. Looking in I found Steven Tyler on top of a table and on all-fours, snorting a line of cocaine that looked long enough to be a mile marker, extending from one end of the table to another.”

From a talent perspective, the WSOR delivered a stunning roster of heavyweights. When the festival opened, perhaps the biggest shock of the day occurred at the very outset, when none other than the Scorpions took the stage as unbilled surprise openers. Supporting Lovedrive — their sixth studio outing and first featuring the now-classic lineup — this historic set marked the Scorpions’ United States debut.

No matter how big the band, at one point in their career, every band plays early, mid-day sets way at the bottom of the bill and in 1979, AC/DC were at that very juncture. At least in the States.

They were, however, in rapid ascent on the back of the Highway To Hell album, and the Aussie rockers followed the Germans with an utterly scorching set that remains one of the WSOR’s all-time highlights. Thin Lizzy also emerged as one of the day’s highlights, unleashing a ferocious set of dual-fretted bangers, peaking with Jailbreak. Despite its rocky start, 1979’s first inning was shaping up to be one for the ages.

Over in the Aerosmith camp however, years of stress, bickering and drug-fuelled resentments had reached a tipping point. Backstage, Tom Hamilton’s wife Terry took a verbal swipe at Joe Perry’s wife Elyssa, who responded by hurling a glass of milk at Terry, launching the two into a fight.

As Tom and Joe attempted to separate the two, Steven railed at the men to reign in their wives. Similar blowouts among band members were not particularly out of the ordinary for Aerosmith. Guitarist Brad Whitford would later describe that period by saying, “Being in Aerosmith was like walking into a dog fight and both dogs bite you.”

Meanwhile, inside the stadium, Journey were finishing up a spectacular set. They had released Evolution in the spring and the single, Lovin', Touchin', Squeezin' had infiltrated the US top 20 – a first for the band. This was their second album with Steve Perry and it would go on to sell over three million copies.

Ted Nugent had released State Of Shock earlier that year but he was still riding on the strength of 1978’s sizzling Double Live Gonzo and by all accounts, the Nuge turned in an electric show.

Finally it was time for the headliners. If they had hoped to earn back the goodwill of the people of Cleveland after their previously-cancelled shows, their efforts fell well short, with a set that was widely panned. Many reported that Steven couldn’t seem to remember lyrics and that Joe appeared wholly disinterested in the entire affair. For the band, it was an unqualified disaster.

When they finished, Steven, admittedly very drunk, started back in on Joe. In his biography Walk This Way, Tom recalls, "We came offstage and went right into the trailer and we were freaked at Joe and started yelling at him. And then Joe's answer finally was, 'Well, maybe I should leave the band then.' And Steven said, 'Yeah, well, maybe you fuckin' should.' And the rest of us stood there, basically agreeing with Steven. And then Joe stormed out."

He would not play with Aerosmith again until 1984.

Despite the ragtag performance, fans filing out had little idea that they had just witnessed the end of the classic Aerosmith lineup — for several years, anyway. Adding to the misfortunes, areas of the stadium had been badly vandalised and local news would later report that another fatality had occurred when a fan fell to his death after trying to scale the stadium wall.

The WSOR promoter rescheduled and eventually cancelled the second inning that year, amid concerns for safety. Grimly, on December 3, 1979, eleven people would be trampled to death at a Who concert only a few hours away in Cincinnati. The WSOR held its swan song the next year, with headliner Bob Seger supported by the J. Geils Band, Eddie Money and an up-and-coming outfit from England called Def Leppard.