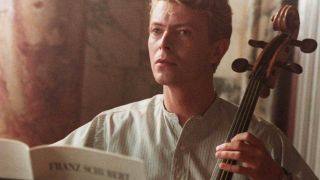 In 1995 I’m asking 48-year-old David Bowie if he feels he’s acquired wisdom. He’s just released the Outside album and the press release, to his amusement, describes him as having “reached his mid-life”. He chortles. “The old sage, har har har! Ah, but you see, I was playing age 130 when I was 38, or something, in The Hunger. It comes naturally to me now!”

He was actually 36 when he made The Hunger, the 1983 Tony Scott film described by Roger Ebert as “an agonizingly bad vampire movie”. While many agreed that it was all style and glossy set design and no story, the film has yet acquired cult status, not least because of its leading cast of Bowie, Catherine Deneuve and Susan Sarandon. (A young Willem Dafoe is credited as “1st phone booth youth”). Some praised its bisexual and lesbian themes while others just found it erotically-charged and good-looking. Stevie Nicks recently cited it as one of her favourite moments of Bowie’s career, declaring it “creepy and strange and amazingly beautiful.”

The plot, which falls apart later, begins well. Miriam (Deneuve) is a vampire promising humans eternal life as her lover. Her current husband of 100 years is John (Bowie), a cellist. We see them feeding on and killing the young and beautiful of New York. Yet then John starts to age, at a rapid pace. He visits a doctor (Sarandon) but she thinks he’s crying wolf. By the time she twigs he isn’t, it’s too late. Miriam shoves him in a coffin to moan and decline forever. The doctor comes searching, only to cop off with Miriam and become infected. There’s then a really, really confusing denouement in which, bafflingly, Sarandon survives but Deneuve ends up moaning and screaming in a coffin herself.

The whole thing doesn’t half look great, though: in an 80s MTV music video look-at-what-we-can-do kind of way. And it opens with an electrifying scene, as Deneuve and Bowie lure unsuspecting Goth night-clubbers (shot in Heaven in Charing Cross) to an evening of fancy sex and gory bloodshed. Bauhaus’ Bela Lugosi’s Dead plays under and across the narrative, while the razor-cheekboned Peter Murphy lip-syncs, writhing and throwing shapes. It’s one of the defining moments of Bauhaus’ mythology and if the whole film had remained such a perfect blend of highbrow and horny it’d be an arthouse classic. There’s an added frisson to the fact that Murphy is momentarily all but outshining his own hero Bowie. (Bowie went to say hi in Murphy’s dressing room; Murphy was so nervous that he necked half a bottle of brandy and thrust the other half at Bowie).

Of course, when they saw the way the scene was edited, the other members of Bauhaus – who’d exuberantly played Ziggy Stardust on Top Of The Pops the previous year - felt a little left out. David J told me, “I went to see the film with Daniel and Kevin. On the way there, we were joking, “Oh I bet it’ll be all about Murphy!” And – surprise, surprise! It was funny…but we were a bit miffed.” Drummer Kevin Haskins reckons he “understood that his (Murphy’s) performance was great theatre, and it served the movie well. When we three saw it, we were going, “Oh look, I can see the end of my guitar!” And, “Oh look, there’s my kneecap!””

Tony Scott, younger brother of Sir Ridley, died in 2012. The critics’ savaging of his feature debut badly hindered his Hollywood career short-term, but by ’86 he was hitting the target with Top Gun. He later mused that The Hunger was “a surreal opera” and that if he had the chance to do it again he’d make it “less self-conscious” and “more gritty and real…it was too artsy, too trendy, too weird.” As influences he cited Nicolas Roeg, especially Performance and The Man Who Fell To Earth, yet Roeg’s choppy, complex narrative techniques aren’t easy for others to pull off. Scott also cited Polanski’s Repulsion and the photography of Helmut Newton. The muddled ending was insisted on by the studio, in theory to leave open the possibility of a sequel or franchise. “God the critics slammed me so hard, particularly the British,” reflected Scott. “After I read all the reviews I was so distraught and upset that I never read another review until Man On Fire (2004).”

Numerous men and indeed women were set on fire by the film’s infamous love scene between screen icons Deneuve and Sarandon, which is one popular reason to keep watching after Bowie’s sadly been phased out – ashes to ashes - all too soon. Sarandon recently discussed it, opening her thoughts with the memorable line, “We had to figure out who was pitching and who was catching.” She also didn’t want her character to be drunk, as she wanted a “level playing field. It’s more interesting that she’s doing it voluntarily.” The mood of glamorous seduction was, however, killed in quite spectacular fashion when the set was interrupted by a man wielding a gun. He wasn’t happy.

“They’d pulled some of the money while we were filming,” Sarandon revealed to Vulture three years ago. “It was pretty shaky figuring out how to finish the movie. We ended up in Brooklyn doing pick-up shots. And in true New York fashion, Catherine and I were on the floor of this gas garage kissing when the guy decided he wanted more money for the rental of the garage and ran onto the set - with a gun. We’re down on the floor and all of a sudden it got light, the doors were open, I didn’t understand what was going on. He was telling everybody to get out, grabbing the cameras. That’s when all hell broke loose. Tony (Scott) immediately got into the fisticuffs. We all got out somehow. Jesus, I haven’t had that kind of interruption in any other film I’ve ever done.” Not to dampen the erotic mystery further, but Sarandon – who thinks “the scene plays really well” – added that, “I think the French opera Lakme was used to score it, and I’m very fond of that. It’s in (the film) Atlantic City when I’m bathing too, so I feel like it’s my breasts’ theme music.”

“Stylish! Explicit! It’ll take your breath away!” was a typical review quote used in the marketing campaign, as was “So bizarre! So sensual! So shocking!”, though for all its star wattage The Hunger stalled at $10M at the box office. It’s lived on though – perhaps immortally, who knows? – with a reverent following in Goth world. There was also a British-Canadian 1997-2000 TV spin-off series, in which (after Terence Stamp hosted Season One), Bowie himself served as Season Two’s host, introducing the stand-alone stories of sex and horror, the new gods. Bowie’s acting career, despite some stellar high points, never fully sustained. “It’s purely decorative for me,” he told me. “It’s just fun. It’s not something I seriously entertained as an ambition. I find it really boring, all that hanging around, people talking about what films they’ve just finished or they’re going to be doing: the whole thing revolves around the industry. Zzzzzz…you think: Christ, can’t we talk about anything else except movies?”

In ’83 Bowie had already moved on to his latest persona, the Let’s Dance pop star: the album was released in April, a fortnight before the movie. Ah well, nothing human loves forever. Yet The Hunger still satisfies certain left-of-centre appetites and leaves a unique taste in the mouth.

For the best in Horror to own now, click for DVD or Blu-ray; or watch on Amazon Video.

10 Horror Movie Soundtracks To Scare Your Pants Off