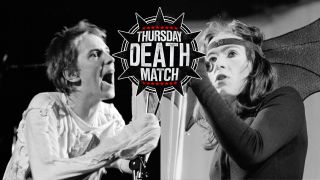 Received wisdom says that punk came to town and swept prog away, like musical meteorites wiping out the dinosaurs. It’s nonsense, of course, but we still like to sit in pubs and argue the toss, because that’s what we do. You can place your own vote at the foot of the page, but before you get there, here’s Rob Hughes to get the ball rolling, and he’s wearing multi-tartan 3⁄4-length bondage pants.

Year Zero my arse. Punk was no more Year Zero than Level 42. But that’s never what it was all about.

What punk did was no different to what every great movement in popular culture has always done - rearrange the existing pieces and present them in a way that makes you want to chuck your cap in the air or kiss the dog. Because punk came from the same primordial ooze that made rock‘n’roll, the same raw constituents that made Little Richard, Jerry Lee and Chuck Berry leap and shake and holler. Rock‘n’roll is essentially the sound of unkempt youth in its arsey prime, rebelling against everything just because it’s there. Punk was fired by the same impulse. And it was loud! Fast! Brutal! With exclamation marks!

It also arrived at a time – or rather, because of a time – when rock music had forgotten what it was there for. Most bands looked older than your dad, probably because they actually were, and the rebellious thrust of the ‘Sixties had slowed into a hierarchical culture where your average rock star was now likely to own a fleet of Bentleys and a string of otter farms in Honiton.

Prog was the bloated face of rock in the mid-‘Seventies: smug and overblown. People always trot out the same old things in its defence, how it was daring and adventurous and all that bollocks. But what could be more radical in 1976 than the sound of The Ramones? Four weird-looking whippets in matching leather and crap jeans, who tore through songs like their mothers’ lives depended on it, sneered at the notion of guitar solos and sang about mad girlfriends and going to gigs. Prog fiddled, punk burned.

In a Britain that was laid up in bed due to strikes, political indifference and a general sort of malaise, the Sex Pistols felt like messengers sent to lance the boil, even though they didn’t quite know how to do it. They yelled out No Future not because they didn’t want one, but because there might not even be one.

When they weren’t moaning about not getting any sex, punks sang about the big stuff: revolution, riots, unemployment, sovereignty, feeling miserable. There was none of that strokey beard nonsense that went on with prog. You weren’t likely to hear songs about flying teapots and cheese at an Eddie & The Hot Rods gig.

Plus everyone felt like they could get up and do it. Punk was refreshingly low on flash and technical expertise, which meant that (a) it was impossible to write 20-minute songs about goblins or King Arthur, and (b) you were more likely to start a band of your own. The Adverts’ first tour saw them packed off as support to The Damned. Remember the posters? “The Adverts know one chord, The Damned know three. See all four at…”

The packaging of punk was also key. Like the music itself, most punk records were dressed up in fanzine-type sleeves with a minimum of tart, suggesting they might’ve been knocked up at lunchtime on the Xerox machine. There were no armadillo tanks or mallet-wielding croquet maidens here. Much less Roger bloody Dean.

Of course, we have to concede that prog did play a proactive part in the onset of punk. Johnny Rotten may have sauntered about in an ‘I Hate Pink Floyd’ t-shirt, but it’s pretty well documented that he grew up listening to Van Der Graaf Generator and Hawkwind. And even though Joe Strummer declared, “No Elvis, Beatles or The Rolling Stones in 1977”, we all know he was an ex-hippie whose favourite gig had been the 1972 Bickershaw Festival (in his defence though, it was Captain Beefheart that sealed it for him).

Here’s Jerry Ewing, editor of the Prog magazine, to pour scorn on the very notion that punk might be superior.

Ah, prog versus punk. That old chestnut. Tiresomely rearing its head above the parapet once more, as sure as you can guarantee that somewhere in the world, Charlie Harper and his UK Subs, or Peter and his Test Tube Babies, are taking the stage of some sordid little venue somewhere.

And therein lies the rub. Or at least one of several that this supposed battle throws up. Because wasn’t the very essence of punk rock that it’s better to burn out than to fade away? And true, whilst punk rock had seemingly burnt itself out in little over a year, evolving into the more radio friendly new wave, why are The Damned, The Stranglers and countless others still with us? And even if they only did it for the Filthy Lucre, how many Sex Pistols reunions have we had in recent years? If punk wants to stake a claim for honesty and integrity, which I’m sure it will, I think we’ve blown that one right out of the water straight away.

True, when it reared its snotty, pimply ugly little head, punk rock was as much a musical reaction to what had gone before as it was a much-needed social uprising. Prog, with its evident excess and often over-bearing musicality, was the easiest whipping boy. But let us not forget punk arrived because it was also a reaction to the mind-numbing mainstream pop of the 70s (remember the Alessi Brothers Oh Lori or Mary McGovern’s Torn Between Two Lovers anyone?) or the gradually deflating glam rock balloon, which may have begun with such a fantastic colourful explosion of Slade, The Sweet, Bowie, Marc Bolan et al, but by the mid-70s was epitomised by the likes of the Bay City Rollers!

What is true, is that prog rock was bloated and directionless, even by 1975, after some six years of overwhelmingly prodigious music. And the ill-wind that punk rock blew through both music and society served for the music not to die as some punk populists would have you believe, but to reassess itself. The old giants became more streamlined. Some (Genesis and Pink Floyd) even went on to become the biggest selling artists of the 80s and 90s. And a new breed of young prog rocker arrived, steeped in both prog’s rich heritage but also fuelled by punk rock’s nascent energy and passion. True, there are prog fans of a certain age who will most likely break down in tears at the mere mention of punk rock. But there’s many a younger prog rock fan who has no problem whatsoever with the epithet “anger is an energy” and positively enjoys punk rock as well as prog.

“Too clever” is another barb often sent prog’s way. Given the very nature of the music and the evident intelligence behind it, there may be an element of truth to this, but the music world is littered with bands who began as one thing and ended up another. When Prog magazine interviewed Andy Partridge of Swindon noiseniks XTC he began by pointing out this band were called “pronk” in their early days (prog + punk, see?) and ended listing a raft of XTC songs with the proclamation “that was well proggy”. Pronk is alive and well and part of prog’s firmament today with bands like Trojan Horse and The Fierce And The Dead. “We only played hardcore because we weren’t good enough to play properly,” Stephen Brodsky of Cave In told me once about his band’s shift to the Rush-inspired prog of Antenna. There have been similar sentiments from the likes of …Trail of Dead and others too.

Punk has even embraced that most prog of record style, the concept album. Look no further than Ween’s The Mollusk, Husker Du’s Zen, The Jam’s Setting Sons, Rudimentary Peni’s Pope Adrian 37th Psychiatrist and of course (although they don’t sound particularly punk to me) Green Day’s American Idiot. As for that great post-punk movement, the likes of Wire (recently featured in Prog) and Magazine had more than whiff of progressive, whilst post-rock is pretty much an accepted sub-genre of prog these days, and bands like Mogwai, Godspeed You! Black Emperor, 65daysofstatic, Russian Circles, Sigur Ros, Maybeshewill, Talk Talk and more are accepted as being part of the giant prog umbrella.

Another delightful irony is the amount of punk rockers who have graced the pages of Prog. CaptainSensible happily showed us through his record collection, Jean-Jacques Burnell, whilst proudly telling us that Down In The Sewer on The Stranglers debut was a four-part suite, professed his love of Caravan. Even Jello Biafra has got in on the act. And we all know about John Lydon’s love of krautrock. And if anyone epitomises punk’s DIY ethos, surely it is the legions of prog bands doing their own thing in the face of years of major label disinterest?

No, punk rock loves prog rock. It was the media that generated the so-called feud. And for that, as well as the rude state of health of progressive rock in today’s musical world, prog wins this argument hands down.