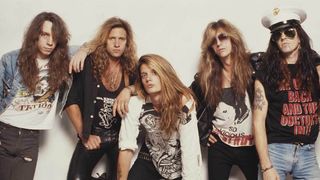 Youth Gone Wild may not have been the biggest hit off Skid Row’s self-titled debut album of 1989, but with its grab-you-by-the-throat riff, shouted, gang-style backing vocals and ‘us against them’ lyric the song quickly became, and remains, the band’s defining anthem.

It also holds a special place in the heart of former Skid Row singer Sebastian Bach, as the song was largely responsible for his joining the band. In the mid-80s the singer, then going by his given name of Sebastian Bierk, was a lanky, poofy-haired teenager making a name for himself fronting North American metal bands such as Madam X and VO5.

After one particular show with the latter in 1987, he found himself partying the night away with Mötley Crüe’s Nikki Sixx and Tommy Lee, who had happened to be at the gig.

“They loved me,” Bach says of the Crüe pair, “because I was the guy with all the blow.”

And so began a chain of events that would severely impact the singer’s life.

“I gave Nikki a cassette with some of my stuff and a photo, and he passed it on to [Mötley Crüe manager] Doc McGhee,” Bach recalls. “Doc also managed Bon Jovi, and Jon had grown up with Snake [Skid Row guitarist Dave ‘Snake’ Sabo]. Then one day I get this tape in the mail at my place in Toronto, with some songs from a band from New Jersey.”

Coincidentally, it turned out that this wasn’t the first time Bach had come across the band on the tape.

“A few months before, I had gone to the wedding of a photographer friend of mine,” he says. “While I was there I met Jon Bon Jovi’s parents, and they started telling me about this new band from Jersey. When I got the tape in the mail, I realised it was the same guys.”

Despite the distinguished cast of characters involved in connecting Bach to the still-unnamed New Jersey band, he wasn’t exactly bowled over by what he heard.

“The singer they had on there was a complete Bon Jovi clone,” Bach recalls. “I listened to it once and then forgot about it for a couple of days.”

At the urging of a friend, he revisited the demo, and had a change of heart after playing one song in particular: Youth Gone Wild.

“It was those first two lines,” Bach says: ‘Since I was born they couldn’t hold me down/Another misfit kid another burned out town.’ I felt like it was speaking to my life. I knew I could deliver that song with power and conviction. All I had been looking for was good music that I could sing along to. And this was good music. Youth… was the song that led me to move to New Jersey.”

Bach was in, and headed to New Jersey to begin rehearsing with Snake and the band: guitarist Scotti Hill, bassist Rachel Bolan and drummer Rob Affuso. One of the first songs they worked on was Youth Gone Wild, which had been written by Sabo and Bolan.

From the outset, Bach made it very clear that, unlike the singer he had heard on the demo version, he was no Bon Jovi clone.

“I remember playing Youth… with the guys, and when we got to the middle part where we do the chorus with just drums and vocals, I sang the entire thing in one breath. And they all went: ‘Holy shit, man!’. They couldn’t believe it.”

With Bach at the helm the band, now named Skid Row, quickly secured a deal with Atlantic Records [though only Bach, Sabo and Bolan were actually signed to the label], and were packed off to Royal Recorders, a studio in Lake Geneva, Wisconsin, to record their debut album.

“I think the label sent us out there to keep us out of trouble,” says Bach. “We were all little kids at the time, though I was a littler kid than the others. But we knew we had to make a killer album. I remember one day while we were out there Scotti and I went to some amusement park.

"We were just walking around, and I said to him: ‘Hey, man, do you think we’ll ever go gold? Could you imagine that?’. And he was like: ‘I don’t know, man. That’d be fucking crazy!’.” Bach laughs. “Once the album came out I think that took about two weeks.”

Skid Row took off practically upon its release in January 1989, thanks in no small part to Youth Gone Wild, which was issued as the album’s first single. The song – and the accompanying video – announced the band as rock’s newest bad boys, the seedy underside of the poppy, Winger/Warrant- style hard rock that had started to dominate the music landscape.

“We did that video in some big warehouse in Hollywood,” Bach says. “I remember drinking a lot of whiskey during the shoot. That was back when we used to drink booze all day. That was also one of the first times that I didn’t tease up my hair. I just let it go natural. Which was a big step for me [laughs].”

On the strength of two more singles – 18 And Life and the power-ballad I Remember You – the Skid Row album went on to sell more than five million copies. The band became superstars, and no member more so than the still-under-21 Bach, who, with his pretty-boy good looks, banshee wail of a voice and penchant for wild behaviour, was Youth Gone Wild personified.

During the tour for the album he was arrested after hurling a bottle from the stage and injuring a female member of the audience. A few months earlier he had made the news for wearing a T-shirt bearing the slogan: ‘AIDS Kills Fags Dead’.

In spite of, or perhaps in part due to, Bach’s penchant for controversy, Skid Row’s second album, 1991’s Slave To The Grind, debuted at No.1 on the US chart. It would prove to be the band’s peak, and after one more studio record, 1994’s Subhuman Race, Skid Row parted ways with Bach, before calling it quits.

Though they now lead very separate careers, both Bach and Skid Row continue to perform Youth Gone Wild in concert, and the song remains a showstopper.

“It’s just a true anthem,” Bach says. “It’s the same as when Ozzy sings Paranoid, or David Lee Roth does Runnin’ With the Devil. People love it. It doesn’t matter if it’s a club in New Jersey in 1988 or a stadium in Germany in 2007, when that song comes on, every person in the room becomes the Youth Gone Wild.”