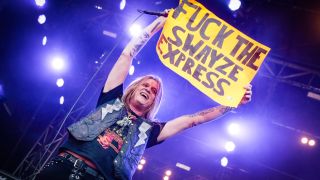 Sebastian Bach has never needed much prompting to offer an opinion. And as the former Skid Row frontman prepares to release Kicking And Screaming, his fourth solo album, it’s clear that little has changed.

Despite a career path that has diverted him towards musical theatre, as the title characters in Jekyll & Hyde on Broadway, and television, with a recurring role in Gilmore Girls and a slate of reality TV shows such as I Married Sebastian Bach, he remains at heart a full-on, in-your-face rock’n’roll frontman.

“Shit, man,” he yells, “it’s what I do. Whose hair do you think they were talking about when they talk about hair metal anyway?”

One press release described you as “one of the last true rock stars”. Do you agree?

Ah, I dunno. I guess if you mean fighting and getting arrested, sure, I’ve done that – and I’m still doing it. But, you know, what is a rock star? Well, Ozzy’s a rock star, Judas Priest are rock stars.

Ronnie James Dio, his best album, the one I fucking love the most, was his last. Heaven And Hell, The Devil You Know. Bible Black was his best fucking song ever. That’s what I want – to be still doing it when I’m 65 and writing the best songs that I can write. That’s what being a rock star is. It’s the music that people remember, not all the other stuff.

You haven’t stood still and waited for the world to like heavy metal again, you’ve been on stage and screen. What have you learned?

Jekyll & Hyde was what got me all the TV. Jason Flom, who signed Skid Row to Atlantic, recommended me to the producers because they wanted a real rock’n’roll guy on Broadway. I got this script… Man, I was nervous about it. Jason said, look, Hyde is your I Remember You voice, and Jekyll is Monkey Business. Would I keep doing it? Nah. It doesn’t mean shit. TV doesn’t mean shit.

Reality TV ruins more people than it makes. What’s the secret to being good on it?

I just turn up and I don’t give a shit. That’s it. TV doesn’t last. It’s gone tomorrow. Great music lasts for years. I’ve been doing interviews with you guys in England for 25 years. England made me. No one’s going to be talking to me about some reality show in 25 years’ time. It’s irrelevant. No one can even remember who won, because there’s another one along in a minute. Simon Cowell never found a legend like Ozzy Osbourne or Judas Priest. My father was a painter [the artist David Bierk] and he painted up to the day he died. And I want to make music that way, regardless of fashion or whatever.

Your album Angel Down featured Axl Rose on three songs and came out before Guns N’ Roses’ Chinese Democracy. On reflection, did that overshadow the rest of Angel Down?

Maybe. I think the music will last long after everyone has forgotten all the other stuff – what time he came on stage or whatever. Just to have his voice on those songs, that is what it was about. People are fascinated by him. He fills out two nights at the O2 because people want to hear him sing.

That I’m hard to work with. I’m just demanding. When I’m recording, I want every guitar sound, every scream to be right, and I won’t stop until they are.

What are the best and worst drugs you’ve taken?

Marijuana’s the best. That’s not a drug, it’s like parsley or something. The worst is cocaine, but I’ve not done that for about 10 years. Or Xanax – taking that on the bus to get to sleep.

Not being faithful to some of the people I love.

Divorce lawyers. Kids, if you want to make money, forget about the music business, become a divorce attorney.

What can you do that no one else can?

Sing I Remember You.

I’d say the only place where sweat comes after success is in the dictionary. You’ve got to work.