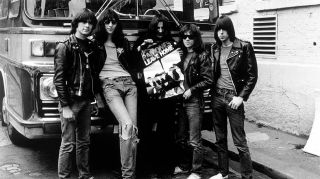 “Who, me? Naaaahh!” Dee Dee Ramone lets out a goofy cartoon chuckle at the very idea of the Ramones hanging ten on surfboards, but confesses he always liked to go to Rockaway Beach, as immortalised in the band’s classic song of the same name.

Sitting next to him in a dressing room on the Ramones’ December 1977 UK tour, Joey giggles at the very thought, although Johnny confirms Dee Dee as “the only real beach-goer” in the Ramones and acknowledges the surfing elements that started creeping in on previous single Sheena is A Punk Rocker (Joey’s self-described “first surf/punk rock teenage rebellion song”). “It’s a surfing-type song so we wanted to get a surfing sound on it” Johnny states, in typically blunt fashion.

Rockaway Beach blew a pure ocean breeze through the band’s downtown cobwebs, joining their then-new album Rocket To Russia’s demented take on the Trashmen’s Surfin’ Bird and wide-eyed version of Bobby Freeman’s Do You Wanna Dance, as covered by Joey’s beloved Beach Boys in 1965.

Rockaway Beach became the favoured hangout for young Doug Colvin (later aka Dee Dee Ramone) after he escaped with his mother from an alcoholic father in Germany and moved to New York City when he was 15. He saw Rockaway Beach and its enormous amusement park as his private escape.

Rockaway Beach was one of 14 songs the Ramones took into New York’s Mediasound studio in August 1977 for their third album, later titled Rocket To Russia. Although the album was ostensibly produced by Tony Bongiovi and drummer Tommy Ramone (who was about to leave the band to take a back-room studio role), it was engineer Ed Stasium who had the task of translating the Ramones’ torrential live sound on to tape. Dissatisfied with Bongiovi’s production on previous album Leave Home (which he also engineered), Stasium remembered the “room sound” ambience techniques he’d learned from watching Roy Thomas Baker, and thought they would work brilliantly at Mediasound, a converted Baptist church on West 57th Street.

“It was a huge room, almost cathedral-like,” remembers Stasium, who has masterminded Rocket To Russia’s spectacular reissue, complete with outtakes, live recordings and 40th Anniversary Tracking Mix that captures the Ramones as they sounded in the room. “When I went in there I thought: ‘I’m going to use this room sound and ambience that Roy inspired me to do.’ As well as close-mic’ing the band out in the studio, I put up room mics to capture them live. The room sound picked up everything, and doing the tracking probably took two days.

“When Bill Inglott, my co-producer on these box sets who finds the multi-tracks in the Warner Brothers vaults, transferred the tapes to digital, the first thing I did was listen to the room sound. Holy mother of pearl, it sounded amazing. When we originally mixed the album we didn’t incorporate that room sound too much, it was just lying beneath. But what a revelation hearing those tracks now! Those mixes are the band in the studio, live; an in-your-face, bare-boned tracking mix, just the band going at it in the studio, captured by those room microphones. No double-track vocals, guitar overdubs or background vocals; all Ramones all the time, balls-to-the-wall.”

Stasium remembers Rockaway Beach as first song recorded at the sessions, but cites opening track Cretin Hop as his perfect encapsulation of the album regarded by most as the Ramones’ best. “It’s a funny song, so typical of the Ramones with the lyrical content and hilarity of it. It’s pure driving Ramones; the way it starts off the record with that E-to-A chord progression and they slam into it. It’s very powerful; minimalism at its best.

“We just started recording, and those are the songs that we picked. I had always thought that the version of I Don’t Care on the original album was a newer version, but when I got to the multi-tracks recently I realised the version we cut at Mediasound was never used and we used the B-side [to Sheena Is A Punk Rocker] version on the original album. The anniversary album track is the first time it’s been released. It’s a little slower and a different sound. The multi-tracks of the [single versions of] Sheena and I Don’t Care have disappeared, but fortunately we have this version.”

Stasium is very aware that, with all four Ramones who recorded Rocket To Russia now deceased, he is responsible for their magnificent legacy. The Rocket To Russia reissue bodes well for similar treatments planned for Road To Ruin, the Phil Spector-produced End Of The Century and, hopefully, all five concerts recorded for It’s Alive.

“Who would have thought after recording them forty years ago that in 2017 I would literally still be working with them; going through the multi-tracks, finding this great stuff and putting out these lovely box sets? People might diss it and say: ‘Ah, you’re just a money grabber’, but I don’t look at it that way at all. This is a great treat for true fans of the Ramones who’ll love this stuff, and I’m so proud to be associated with the legacy. These are the definitive remastered box sets for each of these albums.”

Even if the Ramones never surfed, Rockaway Beach will never lose it’s crested-wave sparkle and resonance. When the shore front was devastated by 2012’s Hurricane Sandy, the song was used in a radio ad for the rebuilding fund, Dee Dee’s quintessential Ramones lyrics spilling out once more: ‘Chewin’ out a rhythm on my bubblegum/The sun is out, and I want some…’

Rocket To Russia: 40th Anniversary Deluxe Edition is out now via Rhino.