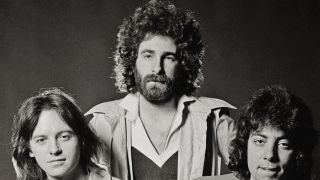 A typically enigmatic, melodic and eloquent mix of music and wordplay, I’m Mandy Fly Me gave 10cc one of their biggest hits. But, nearly four decades after they wrote it, its genesis has become a distillation of the bitterness and clash of characters that sadly defines 10cc today.

Despite an impressive run of UK Top 10 records that included the No.1 singles Rubber Bullets and I’m Not In Love, by 1976 10cc’s original line-up was on its last legs. The following year’s album, How Dare You!, would be the last by the Stockport art-rockers with Kevin Godley and Lol Creme.

With all four members contributing vocals, various instruments and song ideas and being involved in the production of their records at the group-owned Strawberry Studios, the band’s internal mechanism was more complicated than most. Along with Art For Art’s Sake, I’m Mandy Fly Me was one of two hits from a highly inventive album conceived amid ever-growing tension. Indeed both Eric Stewart and Graham Gouldman, who would drive the band onwards for eight more years after Godley and Creme’s exit, have both claimed the idea for Mandy’s title and lyrics as their own.

“I saw a tramp standing in front of an American Airlines poster that featured a beautiful stewardess, smiling seductively and beckoning with her finger: ‘Hi, I’m Cheryl… Fly Me!’” Stewart recalls. “The statement was obviously a pseudo-sexual invitation: ‘Come on, big boy, book a flight with us and I’m all yours.’ But watching this poor, ragged soul, I wondered if he was fantasising about getting on the flight, and ‘getting off’ with her, when realistically he would never board any aeroplane – [let alone] with her.”

“Eric didn’t see the poster, I did,” insists Gouldman, citing a United Airlines billboard that he claims said: ‘I’m Susie, fly me to Miami’. “That intrigued me because there was a real sexual connotation.”

Although Gouldman also professes to have switched the stewardess’s first name (“I changed Cheryl to Mandy!” Stewart objects), he stresses that the song isn’t about drugs, and Mandrax in particular.

Both agree that an air of disappointment had greeted the song’s earliest draft, from Gouldman in a lyrical sense and Stewart in a musical one. That Godley was responsible for saving the day in both regards is, for once, unanimous.

“The bare bones of its words were just okay until Kevin rewrote them,” says Gouldman. Stewart concurs: “The song wasn’t really knocking us out. Then, in his usual subtle way, Kevin said: ‘It’s too safe. It needs a kick up the arse.’ And he was right. It was well played and smooth but it didn’t make you sit up and take notice.”

Godley’s proposal of “two whacking great guitar solos” (Stewart’s description) and the addition of the bridge ‘The world was spinning like a ball/And then it wasn’t there at all/And as my heart began to fall…” heightened the drama of a storyline in which Mandy, the plane and its passengers dropped out of the clouds and plummeted into the sea.

So the plane crashes, Mandy saves the song’s tramp-like subject from the sharks, and, lo and behold, her body vanishes mysteriously from the wreckage.

“It’s a bit of a tall tale,” acknowledges Gouldman. “But a lot of the things we did back then were in that stream-of-consciousness style. We liked writing stories that defied logic but somehow felt right. And we hoped that people would share that feeling.”

I’m Mandy Fly Me certainly says a lot in five minutes and 24 seconds. As well as a beautiful, radio-friendly arrangement, 10cc could always be relied upon for art-rock excess, and as an extra quirk it included a snippet from Clockwork Creep, a song on their 1974 album Sheet Music, its crooned lyric: “Oooh, you’ll never get me up in one of these again/’Cos what goes up, must come down” bolted on to Mandy’s intro. “I think that was my idea,” Gouldman says. “We tried to make it sound like the crappy headphones that are given out on a plane.” Trivia fans should also listen for the ‘ping’ noise you hear when the button to summon a flight attendant is pressed; it’s at the five-minute mark on the full-length album version.

However, as 1975 came to an end, it looked like 10cc might too. “There was a cloud on the horizon. Everyone knew that,” states Gouldman. “Kevin and I have since discussed the things that should have been done. With hindsight, a break might have solved the problem.”

Godley and Creme quit 10cc after the completion of the How Dare You! album, the former later claiming that “10cc was becoming safe and predictable”. As well as releasing their own records, the pair later pursued a successful career making videos for other artists. Although the hits would eventually dry up, Gouldman and Stewart continued as 10cc until 1983. The four men worked together again on ’92’s …Meanwhile album, but Godley and Creme’s involvement was minimal. Three years later, Gouldman and Stewart wound up the band after the poorly received and uncharting Mirror Mirror album.

To Stewart’s chagrin, Gouldman continues to tour with his own line-up of 10cc. These days there’s no love lost between the two. “Gouldman is always taking credit for things that he didn’t do,” Stewart complains. “It’s pathetic.”

Almost 40 years after its release, I’m Mandy Fly Me remains a cherished throwback to a glorious era in British popular music, its storytelling qualities later reflected in cinematic-style mini-epics such as Guns N’ Roses’ November Rain.

“Yeah, I hear echoes to what 10cc did in a lot of other bands,” Gouldman agrees. “The example that I’m really talking about is Une Nuit A Paris [a three-song suite on 10cc’s 1975 album The Original Soundtrack], which preceded Bohemian Rhapsody. Sometimes those influences were credited, while others were not. But I suppose that’s life.”

Although 10cc had bigger hits, it could be argued that I’m Mandy Fly Me remains the band’s quintessential song.

“It has all of our hallmarks and is very representative of what 10cc was all about,” says Graham Gouldman. “Our three number ones were Rubber Bullets, which was a real rock song, sung by Lol Creme, the ballad I’m Not In Love, which Eric Stewart sang, and Dreadlock Holiday, a cod-reggae song sung by me. That’s almost three different bands. I’m Mandy Fly Me has all these disparate elements flying all over the place but they’re all distilled into one fantastic record. And it’s still one of our most requested songs in the live show.”