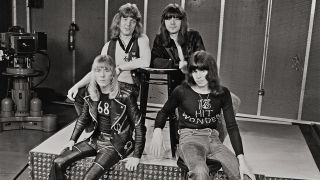 It’s 1974, and the members of Sweet are fed up. On paper their string of hits, including the previous year’s UK chart-topper Block Buster! and a run of No.2s (Hell Raiser, The Ballroom Blitz and Teenage Rampage) appears enviable, but the band are increasingly walled-in by a perception of them as just puppets of their songwriters Mike Chapman and Nicky Chin and producer Phil Wainman; indeed until Wig Wam Bam a couple of years earlier they’d had to battle to play on their own singles.

Having written the B-sides of those singles, Sweet were enjoying success as credible hard rockers in Germany, where their 1974 album Sweet Fanny Adams had briefly outsold Deep Purple’s Burn, but at home they remained viewed, as drummer Mick Tucker once put it so memorably, as “four dissipated old whores, mincing about on Top Of The Pops and churning out computerised pop”.

Tired of being fed inferior songs and tumbling down the pecking order on Chin and Chapman’s roster (which included Suzi Quatro and Mud), dissatisfaction boiled over as the songwriting pair, who were also Sweet’s managers, spent more and more time in California.

“They’d tried to pass us off with a couple of [sub-par] offerings, including Dyna-mite,” guitarist Andy Scott, remembers, referring to a song that Mud took into the top five, “but we needed something more in the vein of what we used to call ‘German matching songs’.”

The ditty that enabled Sweet to break free from ChinniChap (as the writers were known collectively) and also elude Wainman’s clutches already languished as an album track on Desolation Boulevard, the follow-up to Sweet Fanny Adams. Their record label, RCA, had recognised the potential of Fox On The Run, which, as Scott observes, “had been recorded [by Wainman] in the style of a live band”.

Although Sounds magazine later hailed Sweet Fanny Adams as “perhaps the finest collection of glam-metal mayhem ever laid down on vinyl”, the album – written mostly by the band – did not add to their tally of hits, so pressure was building.

“Just before Christmas [1974],” Scott recalls, “everybody just happened to be at my house when the managing director of RCA called to say: ‘We’re not getting the right answers from Mike and Nicky, but we really believe that Fox On The Run could be a hit’. And a week later we were in Ian Gillan’s studio, where nobody knew us; keeping things cloak and dagger was vital.”

Although the song is credited to the entire group, really it was Scott’s baby. The subject matter was an unspecified groupie, hence the couplet: ‘You talk about just every band/But the names you drop are second-hand’.

“Those lyrics were hastily written in the pub before recording the song for the album, hence the fact that it lacked a final verse,” Scott says, laughing. “We vowed that when we re-recorded it we would re-write the words, but never did.”

As a “budding producer”, Scott oversaw the session (but again the label said: ‘Produced by Sweet’). His primary goal was to sex up the track for radio. In the end, however, the guitarist actually added an element that would prove crucial: “The rest of the band had gone to the pub when I incorporated that pulse-type synthesiser sound at the start and stuck it onto the end as well,” he remembers. “Everyone loved it.”

RCA rush-released the reboot of Fox On The Run without bothering to notify Chinn and Chapman, who promptly jumped onto a plane back to England.

“Mike’s words: ‘Well, you’ve finally done it, haven’t you?’ were the best compliment anyone could have paid me,” a smiling Scott says now.

Subsequent albums would see Sweet relish their independence, and despite upping the hard rock quota the flow of hits continued for quite a while, although singer Brian Connolly’s growing alcoholism led to him being fired in 1979.

Following the deaths of Connolly in 1997 and Tucker in 2002, two rival line-ups of Sweet now exist. Steve Priest’s is based in the States, while in Europe Scott’s group still makes new music and tours regularly. Scott has often voiced a desire to revisit the band’s hard-rock roots, so the news that Sweet are to play as special guests to Ritchie Blackmore’s Rainbow at London’s O2 Arena as part of the Stone Free Festival couldn’t have been more timely. If ever they felt like un-mothballing the likes of Windy City, Yesterday’s Rain and giving Little Willy and Wig Wam Bam a breather, that show is a heaven-sent opportunity.

“It’s pretty likely that we will do that,” says Scott. “We’ve got too many hits to play them all in somewhere between forty-five minutes and an hour.”

Back in the 70s, Blackmore jammed with Sweet at Santa Monica Civic at which Sweet had a six-foot dick stage prop that swung down from the ceiling and ejaculated confetti over the audience. The same thing probably won’t happen again this time, will it?

“I suspect not,” Scott says with a laugh. “Nobody knows where that giant dick ended up after we’d finished with it.”

Fox On The Run has been covered by, among others, the Red Hot Chili Peppers, Girlschool, Sweet Savage and the Scorpions (in German). Thanks also to exposure in films, Sweet’s singles are now enjoying a dramatic upturn in popularity. Last year The Ballroom Blitz featured in the film Suicide Squad, and Fox being even in just a trailer for Guardians Of The Galaxy Vol 2 generated such a surge in online sales that it topped the iTunes Top 40 US Rock Song chart.

“A change is in the wind for Sweet, and I’m thrilled that it’s affecting the gigs we’re being offered,” Scott concludes.

As part of QSP, a band also featuring Suzi Quatro and Slade drummer Don Powell, Andy Scott recently played a short series of concerts Down Under that included a date at the Sydney Opera House, after the trio’s self-titled album made the Top 30 in Australia.

“The album also reached number sixteen in the physical chart, which shows that our audience still buys CDs,” Scott says. “The audiences took a while to get used to seeing us as a band instead of playing the hits of our respective groups, but we really enjoyed playing live together. And Suzi’s husband and manager, Rainer Haas, who is a concert promoter, is looking into the idea of putting on some European gigs. I’d like to think there’s more than a definite possibility that they’ll happen.”