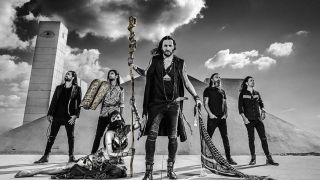 Israel heavies Orphaned Land are gearing up to the biggest concept album of their career later this month. The long-awaited follow-up to 2013’s All Is One challenges the indomitable powers of political and religious leaders over the global consciousness. Below, frontman Kobi Farhi explains why new album Unsung Prophets & Dead Messiahs is a labour of love worth the wait – and why his beloved growls are making a defiant comeback.

Unsung Prophets & Dead Messiahs has taken four years to see the light of day. What took you so long?

“It’s been a very challenging and lengthy process for this album, even though we’ve made concept albums in the past. Our last album All Is One was more up-front with short song titles, but it was less progressive and less of a concept. This time, I thought it would be perfect to combine All Is One’s huge sound and arrangement, the choir and strings, with the approach of our previous concept albums, Mabool and The Never Ending Way Of ORWarriOR. I’m biased but I think it’s our best album to date.”

There’s a massive political concept behind the new album. What brought this on?

“A friend once asked me two important questions: did you know that every year, 70,000 children in India are kidnapped for the purpose of paedophilia, organ harvesting or forcing them to beg on the street? Secondly, do you know who Kim Kardashian is? This is the black mirror that drove me to write this album – something’s really fucked up. Who makes the decision that we don’t know these things? I trust that people will do something once they’re aware that they’re being manipulated.”

What’s the artwork all about?

“The cover is a very detailed, organised chaos – you have guns pointed at your face, the hand of resistance, the Freemason symbols and the Illuminati’s All-Seeing Eye that you see on the dollar bill. We wanted something visually outstanding because money is one of the world’s main problems, one of the gods we worship. Money is driving us crazy because one person can have $20 billion and one kid in Africa cannot drink water.”

You gave up your growls on All Is One but they’re back for Unsung Prophets. What changed your mind?

“I left growling out of the last album because I felt I didn’t have enough room for clean vocals, and I can give much more with my cleans, but I realised this time that I couldn’t give it up completely because it’s such a great form of expression when you’re furious about something in life. The more I thought about the concept of Unsung Prophets, the frustrations with political and religious leaders, the more I realised the growls must stay. Plus I feel the growling tracks happen to have the most emotive lyrics.”

Which tracks are the closest to your heart?

“I really connect with my anger on We Do Not Resist and the sadness and pain through In Propaganda and Chains Fall To Gravity. Above all, I really love Take My Hand because we used the concept of Plato’s Allegory Of The Cave, where a hero comes out of the cave he lived in, saw the world outside and goes back to beg people to leave the cave too. That in itself is an allegory for our lives, we’re living in this cave if we deal with Kim Kardashian and not the kidnapped children, so hopefully my lyrics show that.”

Unsung Prophets & Dead Messiahs is out January 26 and can be pre-ordered now.