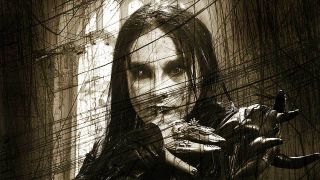 Cradle Of Filth are the most successful band in extreme metal and it’s in no small part of 2004 album Nymphetamine. The band’s first album on Roadrunner Records, that went on to sell hundreds of thousands of copies, sent the Suffolk goth metallers rocketing into the ears of music fans across the globe. And the title track became an anthem, a call to arms for fans of symphonic and black metal everywhere. We sat down with mastermind Dani Filth to get the story behind the song that took Cradle to the next level.

We Needed A Song To Build More Momentum

“We had been on Sony for the last couple of years, and that had led to a place where we’d started getting a little more commercial success. Babylon AD from the album Damnation In A Day had actually had some chart success; I remember hearing it on the radio in my car one day, which was very strange, and we’d headlined a big stage at Ozzfest, so when we signed to Roadrunner they were looking to amplify that.”

“The label were keen to take the song and take that middle section from it to make it a single, which we were quite happy with. Obviously there is two parts to it, Nymphetamine (Overdose) and Nymphetamine (Fix), and their idea was to chop it in two. Originally it’s very different; the guitars were completely different and it was faster, the lyrics were faster. But we had some time off from the studio over Easter and came back and messed about with it and the results were one of those rare times where you go, ‘Fuck me! This is good, I think we’ve got something here!’”

The Video Was Crucial

“The label were keen for us to work with Dani Jacobs, who had done a lot of top pop acts of the day. We sat down and discussed ideas and he wanted it to allude to Macbeth, with a woman playing the male part. There was a bit of lesbianism in there as well, and so we had Liv [Kristine, vocals] on this swing and me with the big coat and the ‘Nymphetamic’. There was a lot of pre-production on it; we filmed it beneath the London Dungeon and it gave it this dank, dark feeling.”

We Weren’t Scared Of Critics

“The metal elitists had already come for us by the time Nymphetamine [the album] dropped so we weren’t that bothered by having a melodic song, to be honest. We had no real reservations about having it as a single, especially as we saw it as part of a bigger picture. It was just one part of the album. You have to get all the way through the entire record before you reach Nymphetamine (Fix), and we just saw it as an essential part of the narrative.”

It Got Us Some Famous Fans

“That song is how Bam Margera discovered us! He heard that album and fell in love with it, and then flew us out to America to be on his TV show. We would hang around with him quite a lot at that time. I mean, it was our biggest-selling album by far. It always makes me laugh that this is our biggest song and it helped the album do so well, because once fans put the record on they were confronted by the first song being Gilded Cunt! That always makes me chuckle.”

It Built Our Audience

“I don’t think we attracted a different kind of audience, but it did give us more of the same audience. We had already had a tour with Type O Negative and Moonspell before that album; we had started writing on that tour, in fact, so we had already dipped our toes into more gothic waters. We did go further down that road on Nymphetamine and the shows did get bigger, but it wasn’t like we were attracting teeny boppers or disco divas!”

Cryptoriana – The Seductiveness Of Decay is out now via Nuclear Blast and available to order from Amazon.

The 10 Best Cradle Of Filth B-Sides