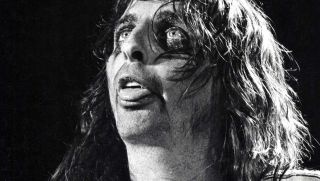 It’s worth noting that by the time Alice Cooper released Welcome To My Nightmare in February 1975, he was already one of the most famous rock celebrities on the planet. Between 1971 and 1974, the Alice Cooper Band, which consisted of Cooper himself (born Vincent Furnier), guitarists Glen Buxton and Michael Bruce, bassist Dennis Dunaway and drummer Neal Smith, had notched up an impressive run of some 10 major singles culled from five hit albums, four of which gained them platinum status.

The band had formed in 1968 out of the ashes of previous band The Nazz (previously known as The Earwigs and then The Spiders). When Todd Rundgren also appeared with a band of the same name, Vincent and pals decided on a name change, and with a press story about using a Ouija board to conjure up the name of a mythical 17th-century witch named Alice Cooper, so the young shock rockers were set in motion.

Initial success was muted – some finding the band’s outrageous approach to their trade too much to handle, others baulking at the look of the band, especially Alice himself, as the young frontman swiftly adopted the titular name himself.

“People would come and see us play and just assume that as I was the lead singer then I must be Alice Cooper,” he explains today. “But originally the band was simply called the Alice Cooper Band. But because everyone thought I was Alice I decided it would be easier and better for the band to simply start calling myself Alice. Of course, later, when I would go solo for Welcome To My Nightmare, I’d really become Alice Cooper.”

The band came to the attention of Frank Zappa, who signed them to his Straight label. The guys had famously misunderstood Frank when he’d told them to come to his house for an audition at seven o’clock, meaning in the evening, only for the band to arrive ready to play at seven in the morning. Their 1969 debut Pretties For You went largely ignored, but after an appearance at Toronto’s 1969 Rock And Roll Revival the band were splashed all over the newspapers after the now-legendary ‘chicken incident’.

“Somehow a chicken got on stage,” Alice relates. “I didn’t know anything about farm animals so I assumed it could fly and threw it into the crowd. It landed in the front rows where the fans in wheelchairs were sat. You can imagine the furore.”

Newspaper allegations that Alice had, in fact, bitten the head off the bird and drunk its blood on stage were promptly denied by the band, only for mentor Frank to famously inform Alice, “Well, whatever you do, don’t tell anyone you didn’t do it!” 1970’s Easy Action also went largely ignored, but a move to Alice’s hometown of Detroit (“LA just didn’t get it – they were on the wrong drugs for us”) came as the major Warner Bros corporation bought out the Straight label, and in the UK the glam rock movement was gathering apace.

Teaming up with producer Bob Ezrin gave the band their irst taste of success with the single I’m Eighteen from 1971’s Love It To Death and from then on Alice and the band barely had time to breathe. Killer (1971), School’s Out (1972) and Billion Dollar Babies (1973) catapulted Alice Cooper to the top of the charts on both sides of the Atlantic, and outrageous gimmickry like the decapitation of baby dolls and the introduction of a boa constrictor to the band’s live show added to the shock aspect the band, notably Alice himself, brought to the glam rock genre.

“I saw Anita Pallenberg playing the Great Tyrant in the 1968 film Barbarella wearing long black leather gloves with switchblades coming out of them and I thought, ‘Alice should look like that,’” he says. “That, and a little bit of Emma Peel in The Avengers.”

The effect worked a treat. Moral campaigner Mary Whitehouse succeeded in getting the video for School’s Out banned on the BBC, and one UK MP petitioned the then-Home Secretary to ban the band from performing in the UK. However, when 1974’s Muscle Of Love failed to match the success of its illustrious predecessors, cracks began to show.

“There was some discontent about the direction we were going in, if I remember correctly,” says Alice. “Some of the band decided that they were going to go and work on their own projects so I quite naturally thought I’d do pretty much the same. At the time there was no major decision to disband the Alice Cooper Band, we were just working on different things. It just happened that eventually that’s the way things turned out.”

For Alice Cooper the man, the decision was to also record his own solo album, even if it, like the preceding seven studio albums from the band (not to mention 1974’s immensely successful Alice Cooper’s Greatest Hits, which also outperformed Muscle Of Love) also appeared under the Alice Cooper name. Once again, Alice chose to work with producer Bob Ezrin.

“Bob had worked with us on every album from Love It To Death to Billion Dollar Babies,” states Alice. “He’d been a major player in some of our biggest successes and it felt right to get him involved again. On top of that, Bob is a genius. He hears things other people don’t hear and seems to know exactly how to orchestrate things in a way you don’t get with other producers. His input was invaluable to Welcome To My Nightmare.”

Bob had been working on Lou Reed’s 1973 Berlin album, itself a rock opera of sorts concerning a doomed drug-addled couple, and with the Alice Cooper Band involved in various projects of their own, a new set of musicians would be needed. Bob enlisted guitarists Dick Wagner and Steve Hunter, and bassists Prakash John and Tony Levin from the Reed fold, whilst he himself would lend his considerable keyboard, synthesizer and arranging skills.

“It was very refreshing to be able to work with some new and great musicians,” explains Alice. “Dick Wagner I remember as being particularly good and I really clicked with him as a writer too. He’d already worked with us, playing My Stars on the School’s Out album and we went on to write or co-write the likes of Department Of Youth, Welcome To My Nightmare, The Black Widow, Only Women Bleed… Not a bad array of material for one album.”

Central to the theme of Welcome To My Nightmare is Alice’s basic concept that the songs relate the tale of the nightmares suffered by a young child named Steven.

“I loved horror movies,” says Alice. “Still do. And I also love theatre and musicals. And I always had the grand idea that we could take the basic album and create a stage show from it, which is what we ultimately did. I saw it as like a cross between a nasty fairy tale and something like West Side Story. If you listen to something like Gutter Cat Vs. The Jets from School’s Out you can hear that anyway.

“And working with someone like Bob Ezrin really helped propel the whole thing forward. He doesn’t really hold back and is open to anything so we really just went for it. The whole view was to almost make the album sound like a soundtrack for a movie or a play. And I think we achieved that with Welcome…”

The icing on the cake, however, for the entire album, was to get renowned horror actor Vincent Price to agree to act as a narrator for the album, lending his immediately recognisable voice notably to the emphatic The Black Widow in the part of Museum Curator, uttering the memorable line, ‘And here, my prize, the Black Widow, isn’t she lovely…’

“That wasn’t planned,” Alice notes. “But as time went on we began wondering whether we might need something to add extra effect. I wrote to Vincent. I didn’t expect a reply but apparently he knew all about who I was and was only more than happy to take part. He was fantastic, he really got stuck into the role and he even took part in the TV special that followed. I think he might have even fancied doing the tour as well.”

Recorded at Toronto’s Soundstage and New York’s Electric Lady and A&R Studios between 1974 and 1975, Welcome To My Nightmare was released on the Atlantic label in February 1975 (it appeared on the Anchor label here in the UK) where it reached number five in the Billboard charts. The album spawned a massive US hit with the sensitive Only Women Bleed (a song about a woman in an abusive marriage), although somewhat typically for the over-sensitive US market it was released simply as Only Women. Both Department Of Youth and the disco-inflected title track were also singles.

The whole album was worked into an elaborate stage show to realise Alice’s initial dream, which cost over half a million dollars and featured filmed sections, dancers, giant spiders, dancing skeletons and a nine-foot-tall furry cyclops! Prior to this, the aforementioned hour-long TV special, Alice Cooper: The Nightmare, aired on America’s ABC channel featuring Alice in the main role as Steven, unable to wake up from the nightmares torturing him, and with Vincent Price featuring as the Spirit of the Nightmare. The film won an Emmy and was later released on both VHS and DVD.

The ensuing tour with its impressive stage show was also a success and a series of shows at London’s Wembley Arena were recorded and released theatrically (and, naturally, subsequently on VHS and DVD) in 1976 but wasn’t a massive hit. For Alice though, Welcome To My Nightmare (the album) represents a last hurrah for the 70s. His last US platinum album before his late-80s renaissance, and the start of his spiralling battle against alcohol which would almost totally derail him in 1977.

“I think we got it right with this album,” he says. “It had all the elements that I wanted on the record. And for a first solo album, it’s not a bad start!"

An accident where Alice fell from the stage in Vancouver on the Welcome To My Nightmare tour was a clear indication that his alcohol consumption was having a dire effect on his career. The following Alice Cooper Goes To Hell album (1976) performed reasonably well but 1977’s Lace And Whiskey was not good and following the subsequent tour Alice checked himself into rehab, recording 1978’s From The Inside album about his time there. The remainder of the 70s were spent appearing on TV shows such as The Muppets and making cameo film appearances.

Alice’s early-80s work is largely best forgotten, not least by Alice, who claims no recollection of recording Zipper Catches Skin (1982) and DaDa (1983). However, he eventually kicked the booze, returned newly sober and signed to MCA in 1986 with the metal-orientated Constrictor and followed it with 1987’s even better Raise Your Fist And Yell. Both laid the ground for a return to arena glory with 1989’s Trash and the massive hit Poison. A string of critically acclaimed albums has followed, including 2008’s Along Came A Spider, and Alice tours regularly, maintaining his status as elder statesman of metal.