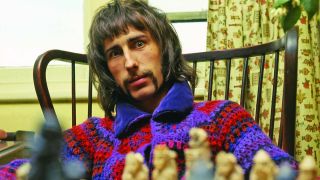 Known as the God Of Hellfire, he’s the yurt-dwelling nudist singer whose 1968 classic Fire – memorably performed on Top Of The Pops with a face-painted and robed Brown wearing a flaming helmet on his head (no Health & Safety killjoys spoiling the fun in those days) – topped the UK singles chart and compelled Jimi Hendrix to try to form a band with him.

Think with your heart, not your head

Too much head-thinking has got us into the mess we find ourselves in now. Society is screwed up to the point of being unfixable. If it were up to me, I’d dismantle all of its structures and we would start over again.

Man evolved through the animals, and the human mind was a great tool that allowed us to survive. Mankind has separated itself from nature, and some people are even rejecting the science that states the reasons for remaining part of nature. It’s all because of capitalistic and economic reasons.

To start over again we would need to teach harmony. The competitive view of how humans should conduct themselves must go. It’s not about being the best; we should be asking how the world can be made fit for human beings and all of the other creatures. War is everywhere and it’s hard to see an end to it all.

There is no god of hellfire

It’s getting to the point where I respect anyone who has a religious belief, though what we really need is something that doesn’t pit people against each other. We need a fresh look at pretty much everything in society.

Music always came first for me

I moved to Paris in 1966 and spent some time involving myself in the theatre. In the following decade I played The Priest in The Who’s rock opera Tommy. The theatre is great. I really loved the idea of creating an alternative universe through the medium of words. I found that astounding. But at the same time, music was such a direct and mysterious language that I didn’t seriously consider becoming an actor. Looking back, I’m happy with the path I’ve taken.

The art of showmanship in rock is dying

There are a handful of brilliant performers that have great ideas but they’re not yet being represented in mass culture. There are so many images on TV or the internet that it’s hard to do what Henry Moore [abstract sculptor and artist, 1898-1986] or the modern artists did – to disturb us with something new. In some ways I think we’ve become unshockable.

Accidents will happen – get used to it

My stage trademark is the flaming headdress, which I wear while singing my number-one hit Fire [released in 1968]. Of course, from time to time things go wrong. At the Windsor Festival [in ’67] I had an assistant who was a pyromaniac. Instead of half-filling the fuel dish, he took it right to the top. My head caught fire. The guy didn’t know what to do so he smacked me on the back and the fuel spilled everywhere. He was running around with his arm on fire, and the flames had to be extinguished by a pint of beer from an audience member. Coming off stage, I had no fire and I was soaking wet. I looked like a drowning raccoon. Over the years I’ve met a number of people who claim to have thrown that drink over me.

Hendrix didn’t really throw me off a tour

What really happened was that Kit Lambert and Chris Stamp [founders of Track Records, Brown and Hendrix’s label at the time] put me up to support him before I was nationally famous. They showed him some photos of me with my make-up and helmet on and Jimi said: “I’m not going on after that.”’ But the two of us did lots of festivals together, and one of the reasons that Fire became a hit was that he took it around the black radio stations in America. Later on we formed a band together. Phew, that was a big undertaking. And it didn’t last for long. Jimi wanted tapes of Wagner in the background and to use huge projection screens, with me out at the front. His idea was to combine Vincent Crane, my keyboard player, and myself with the Experience. But Vince wasn’t terribly keen [laughs]. Back then Jimi wasn’t the revolutionary figure we know him as now – he was just a guy who’d had some hits. But then Vince ended up in a mental home anyway.

After Fire became a hit, I turned down a £750,000 deal with CBS Records on the grounds that The Crazy World Of Arthur Brown already had a contract with Lambert and Stamp [at Track Records]. Carl Palmer and Vincent Crane weren’t too happy about that, but I did what I did out of loyalty. A deal is a deal.

I live a frugal life. I haven’t got lots of money. Up until a year ago I lived in a yurt [a portable circular tent], and now I’m in a huge reconditioned barn. I’ve lived in big mansions, also in an asbestos prefab that was given to me as a flat by the local council. I’m the kind of guy who makes himself happy wherever he lives. I’ve lived through wars in the middle of Africa. Variety is the spice of life.

The human body is a beautiful thing

I’ve performed concerts naked. I was arrested and deported after removing my clothes at the Palermo Pop Festival in Italy [1970], but I don’t understand the fuss over nudity. If you spend time with naked people, you soon get used to the fact that people are fat and thin, big and small, young or old, or whether somebody is gorgeous or perhaps a bit creased. We spend our lives being told that the human body is naughty when really we should be celebrating its beauty.

We are becoming far too politically correct. When I stripped off and sang at the Marquee club in the centre of London, nobody minded. Now I would be on the front page of a newspaper. What was I saying about people being unshockable? Maybe I should take that back.

I’ve just turned seventy-five years old but I like to think I’m in pretty good shape. I prefer meditation over drugs. I made that choice in around 1974. Until then I quite enjoyed acid. I’ve no need for drink or drugs.

One of the secrets is tao oil. You take butter and melt it over and over again until all of the dairy elements are gone. The oil is an incredible anti-ageing ingredient. And each day I do a forty-five-minute program of physical exercise and yoga. Meditation helps to keep the mind flexible. As the body gets older, so the demands grow. The more you can let go of all of that, the happier your body becomes.

Singing is incredibly good for the soul. We used to sing on building sites and at the morning assembly at school. It had a direct, positive effect on the mind and body. To me, one of the worst things to happen to our civilisation was when everybody stopped singing. I recommend knee-wobble dances for all of the politicians.

I believe in alien life – and they’re friendly!

One day my father came to me and said: “Son, I need to tell you something important.” When he prefaced it by saying: “Some people talk about extramarital affairs…” I wondered what he was about to reveal. I was very unprepared for what was to follow. “Son,” he told me, “I’m having an affair with an extraterrestrial – a woman from another planet. And let me tell you, the physical element is just the same as it is down here on earth.” That has rather coloured my wish to someday meet an alien.

we should embrace getting older

We’ve no choice in the matter. I’m very comfortable in my own skin. That’s probably because I don’t believe in the things people insist are bound to happen as we age. I have a nice young partner and I can still do most of the things I used to. As for the things I’ve had to leave behind, I don’t really miss them.

Death comes to us all. I lost a lot of good friends over the last couple of years. It’s sad that I’ll never see them again, but I prefer to look at the time spent together as a gift than to become maudlin.

The music business is changing – get used to it

In my day there was no way of making music without a record company being involved. That’s no longer the case. What we find now is that it’s so easy to make a record that it’s become tougher to make money at it. I used PledgeMusic to release my album Zim Zam Zim [2014], and I was of the first artists to embrace the internet. What used to be has reached an end, and now we’re rebirthing. A couple of years ago I spoke to Jimmy Page, who told me he’d been doing no gigs and was spending time working on his website. The power is returning to the hands of the artist, and I like that.

Simple pleasures are the best

I like to take long walks in the hills. I like dancing. I love tennis and I follow as many of Andy Murray’s games as possible. I also enjoy watching football. Many years ago I used to live in Leeds and supported Leeds United, but when I came back to England from living in America, they’d disappeared down to the Third Division, so I’ve adopted Manchester United as my team. I know it’s frowned upon to swap teams but, well… I’m from the north [Brown was born in Whitby, Yorkshire].

I have no plans to retire

I’ll keep on going till the end. I always tell audiences: “Come and see me again soon before I die on stage.” Making music is what keeps me happy, though what form it will take, I cannot predict. When Pablo Casals, the classical cello player [who died in 1973], decided to call it day, he went and lived at the top of a mountain and would only play for anybody who took the trouble to go and climb up it. I really like that idea.

The Crazy World Of Arthur Brown announce US tour