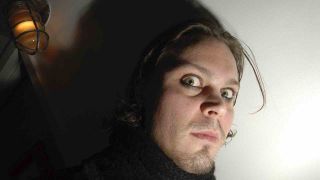 When not dealing in his own brand of love metal, ex-HIM frontman Ville Valo is a confirmed superfan of all things goth. Of course, this shouldn't be much of a surprise when you listen to the likes of Right Here In My Arms or Join Me In Death... but his knowledge and collection goes much deeper than Fields Of The Nephilim and The Mission. Here, Ville Valo explores the dustier, darkest corners of his attic to find some dark-hearted treasures and share the misery.

“No, the name doesn’t exactly inspire thoughts of goth-dom, but I love this lot. They were a German band, in the vein of Sisters Of Mercy – they used a drum machine, sang about amphetamines and sounded bleak in the way that only Germans can do. And you can dance to them too.”

“Another British band. They started out in the gothic vein but later moved into an industrial direction. Touched By Jesus is as evocative and deviant as the title suggests – not a religious song at all. It’s very sexual and disturbed. It makes you want to stand in front of a mirror and paint your lips black.”

"Britain’s Rosetta Stone were one of those groups who stole The Mission’s post-Zeppelin vibe, adding the danceable beat of The Sisters Of Mercy. It might sound like a contradiction but their songs were pretty miserable yet also melodic and poppy. This is such a beautiful track."

Inkubus Sukkubus – Intercourse With A Vampyre

"Don’t Fall is a cover of a song by The Chameleons. I bought my copy at a shop in Camden called Resurrection Records after asking around about new bands – everything was done through word of mouth back then. The album it’s from, One Eye Open, is worth investigating."

"This song revitalised my love of goth. I was DJ-ing one night and someone mentioned their name. They were two guys from Nottingham, and it took me four months to get hold of a copy. They were like a more electronic version of what had been done before: perfectly suited to the long, dark winters of Helsinki."

Clan Of Xymox – Jasmine And Rose

"Clan Of Xymox have been around since the early 1980s. I was introduced to them by a friend from Berlin who’d been a goth DJ. You’d hear Jasmine And Rose in these old weird, goth bunker clubs at 6am, totally wasted and surrounded by people in rubber and leather."

"I still laugh whenever I hear this song. Star Industry are a Belgian band and they released this song back in 1999. They’re singing about ‘Open your eyes and see / It’s the 90s’ when it’s gonna be a new millennium in about two months. But it’s also a great song. It’s a bit like Vision Thing-era Sisters Of Mercy, with lots of amped-up guitar."

"One were an interesting and really obscure band – actually it was just one Australian guy, David Wilkinson. He made one album, Walk The Mercy Mile, which came out and then just disappeared. Musically, it was goth- metal. It’s electronic and extremely poppy. As most people in this genre do, the fella has a very, very deep voice – almost like a Cookie Monster – but it’s an excellent album.