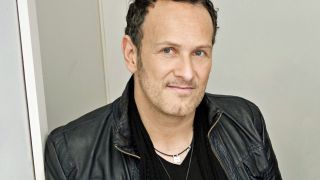 Vivian Campbell didn’t always make nice with his Dio past. In fact, following his acrimonious breakup with singer Ronnie James Dio in 1985, the guitarist – who joined the band when he all of 20 years old – went decades before he could even bring himself to listen to the three albums he recorded with the late metal legend. “It took me a long time to come to grips with that part of my professional life,” says Campbell, who has been a member of Def Leppard since 1992. “But you know, sometimes you reconcile with your past in the most surprising of ways.”

After a brief tour as “stunt guitarist” with Thin Lizzy in 2011, Campbell began to feel re-energised about playing heavier music. “The Lizzy gig reconnected me to my inner teenager,” he says. “The music, and what was required of me as a guitarist, was more aggressive than what I do with Leppard, which is more about singing.” Once the Lizzy dates were over, Campbell put a call in to his former Dio mates, bassist Jimmy Bain and drummer Vinny Appice, and suggested they try playing together.

“It sounds like a cliché, but the chemistry was immediate,” Campbell enthuses. “Even after almost three decades, it was the sound of the old Dio band. Vinny knew of a singer, Andrew Freeman, so we got him in with us, and again, from the second we heard him, it was right there. What impressed me right off was that that Andy was strong and powerful – he held his own against our immense racket – but he didn’t sing like Ronnie. He had his own phrasing and tonality. If he sang like Ronnie, I wouldn’t be interested in doing anything.”

On January 23, a month before the release of the band’s debut album, Heavy Crown, Bain died while on board Def Leppard’s inaugural “Hysteria On The High Seas” cruise. Campbell, who has been waging his own public battle with Hodgkin’s lymphoma since 2013, says that Last in Line are currently deciding how they should proceed. “Jimmy really believed in the band,” he states. “We all do. It would be a shame to not play, but out of respect and love for Jimmy, we need some time to figure things out. We’ll know soon what we plan to do.”

Changing gears, Campbell sat down with Classic Rock to run down five albums that changed his life. “It’s funny, because I never, at any point in my life, had a big record collection,” he points out. “I always borrowed records from my friends, like Raymie Haller, who was the bass player and singer in Sweet Savage. He had a massive record collection. I used to skip school and go listen to stuff at his house. He introduced me to quite a few things that stayed with me all my life.”

“This is the first record I ever owned and dropped a needle on. I just loved it, and I spent hours trying to learn the guitar parts on it. Rory has been a huge influence on me. He’s one of the best guitarists I’ve ever heard.

“This is a live album, and by that I mean it’s all live. It’s not one of those records where they went back and re-recorded parts. Rory’s studio albums were a mixed bag, but on stage he was in his element. I got to see him play live, and I can tell you that what he did in concert is just what you get on this record.

“Rory was a complete blues player. He had so much energy, and he never played the same thing twice. One of the first songs of his I learned was Messin with the Kid, and when I saw him live I was struck by how it wasn’t anything like the studio version. But that was typical of Rory – he plugged in and played. There was no pretence about him.”

“I came to learn in later years that this album isn’t quite as ‘live’ as Rory Gallagher’s Live in Europe, but most of it’s live. I saw Thin Lizzy many times – Sweet Savage opened about 30 or 40 shows for them – so I can say for a fact that this record is a very good representation of them on stage.

“Aside from the tremendous guitar parts of Scott Gorham and Brian Robertson, what I got from this album was the incredible charisma of Phil Lynott. It’s all there on this record. He simply oozed that aura of being a rock star. You get that in the tracks, but also in the repartee between the songs. You feel like you’re watching him. He was a total original.”

“I know this album bucks the trend, because in many people’s eyes it’s not the ‘real’ Deep Purple. This is when David Coverdale, Glenn Hughes and Tommy Bolin were in the band. But there’s a part of me that really likes funk music and syncopated rhythms, so I loved this record a lot.

“I borrowed it from my friend Raymie. I was familiar with the other Deep Purple records – Fireball and In Rock – but when Raymie dropped the needle on this album, I went, ‘Wow! Can I borrow this?’ I played the shit of it for a couple of months and really developed an appreciation for Tommy Bolin. He was more of an American-style guitarist, and I thought he was terrific.

“Sweet Savage did a mixture of covers and originals, and we played Love Child from Come Taste the Band. We tried to do Gettin’ Tighter, but we weren’t funky enough. We were too white to play it convincingly.”

“A lot of people have never heard of this band. They were out of Dublin, and they basically grew out of being a traditional Irish folk band. They fused that style with progressive, guitar-driven rock. It was a very unique sound and musical setup – they were fascinating. Because they were Irish, I got to see them live a bunch of times.

“The Táin represents the pinnacle of the band’s career. There’s a song on it called Dearg Doom that has a great guitar riff. Being a young kid, I was fascinated by anything that had a good guitar tone. The guitar player in the band was a guy named Johnny Fean, and he played a gold Les Paul. I was so seduced by everything he did. This was a big record for me.”

“I was in school when this record came out, and I was immediately fascinated by it. There wasn’t a guitar on it that I could hear, but that didn’t matter. Kate’s voice pulled me right in. It was all about her. As an artist, she was, and still is, so creative.

“She’s always been so daring. Very few artists follow their own muse the way Kate has. She’s never capitulated to whatever current style is popular; she’s always done everything her own way. I respect her so much for that. A one-of-a-kind artist.

“The first song I heard from The Kick Inside was Wuthering Heights, and that made me go right out and buy the record. It was a different album for me – I’d never gone that far away from guitar music, but I just loved Kate’s voice, so I was in.”