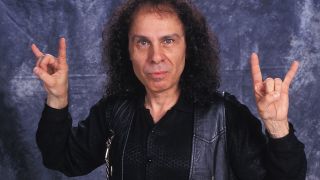 I first heard Ronnie James Dio was in either 1983 or 84. I can’t recall whether it was Dio’s Holy Diver or The Last In Line album now. But I remember listening to the album over and over and over again. I just couldn’t believe how amazing Ronnie was. He put so much heart and soul into everything. And he was different to anyone else on the metal scene.

Ronnie is my favourite singer, and always will be. I feel privileged to have toured with him and to have gotten to know him quite well. I learnt so much from Ronnie just by watching him onstage. He was so genuine. In 1984, I saw Dio live for the first time.

I was standing by the mixing desk, and when he came onstage and started singing, my knees began to tremble. I was so in awe of him. And that feeling has never left. He has give us a huge number of classic songs. But this is my top 11…

Egypt (The Chains Are On)

I did a version of this for the Dio tribute album This Is My Life. The song has a great feeling and vibe. The melody is amazing, and Ronnie’s vocals are tremendous. This affected me so deeply. It’s also unique in the way it was constructed.

The Last In Line

It was a song I nearly did for This Is My Life. I love the power Ronnie gets into his performance – he goes full out. The lyrics really make you think, and I identify with it so much. It also has a very complex arrangement. This isn’t simply verse-chorus-verse, there’s a lot more going on.

In 2011, I stood in for ‘Ripper’ Owens when Dio Disciples toured in Spain; ‘Ripper’ wasn’t available because his daughter was getting married. Some from the Dio camp suggested we did this song, and I have to admit I didn’t know it at the time.

I’m not sure how I could have missed it, but this is probably the most beautiful song I have ever heard in my life. I gather the lyrics were written by Ronnie with love for his wife Wendy. I adore the acoustic vocals.

It comes from the heart. And when I saw Ronnie do it live, this had so much passion. He made you feel every syllable.

As Long As It's Not About Love

A little less known than most of my choices, but I believe it’s very underrated, and right up there with the Ronnie’s best. He started doing it on the Magica tour in America, when I was supporting. But he stopped after playing at the Masquerade Club in Detroit.

Somebody threw a bottle or can of beer at the stage while he was signing it, after a fight broke out in the venue, and after that Ronnie dropped this from the set and refused to do it live again. Such a shame.

Rainbow In The Dark

It’s got a very positive, uplifting message. I’ve performed it a couple of times myself and it always gets a great reaction. For me, it’s a feelgood song.

It’s fast, direct and goes straight to the point. But the simplicity is the strength here. This is a song that gets you moving.

Man On The Silver Mountain

I remember being in Spain in 2000 to get an award, and I met a band there called Mago De Oz. They’re huge over there and were at the same ceremony to receive the Best Band award. Their manager suggested I do a song with them at the event. But as they don’t speak much English and I don’t know Spanish, it was difficult to agree on what to do.

Eventually, we settle don this, and went onstage without any rehearsal. But the magic of the song carried us through, and we got an overwhelming reaction. Later on, I recorded a studio version of this with them, and it was released on their Rarezas compilation in 2006.

There’s so much power and weight in this song. And it’s also very heavy. Ronnie brought so much drama into his delivery, both on the studio version and also when he did it live. It’s earth shattering.

The song’s about all of us metalheads, so you have love it. It gets to the heart of what binds us all together, and empowers us.

I love the rhythm here, and the way Ronnie draws you in from his first note. It’s holds your attention throughout, and is a great example of why Ronnie was the very best. And why there will never be anyone like him again.

Doro was talking to Malcolm Dome.