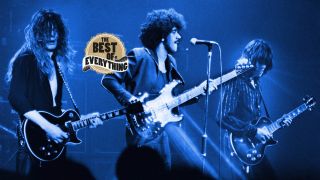 As a teenager, I travelled together with Europe’s first drummer Tony Reno to see Thin Lizzy at London’s Hammersmith Odeon.

It was on one of those 24-hour cruise ships from Sweden. The show made a huge impact on me, because Lizzy gave the audience so much. Not only for the amazing musicianship and the outstanding songs but perhaps most importantly they gave us the power to dream, and for us musicians they gave us hope, that we could one day be standing there ourselves…

COWBOY SONG (Jailbreak, 1976)
I recall seeing them do this at the Hammersmith gig I previously mentioned. I was sitting in the balcony, watching the famous Lizzy glitter ball as they started this song. It made such an impression, partly because they made it look easy and they treated their audience with respect. I always thought there was a cheeky little glint in Phil Lynott’s eyes that made me think that he was enjoying the hell out of what he was doing, and I wanted some of that!

THUNDER AND LIGHTNING (Thunder And Lightning, 1983)
For some reason we had found out that Thin Lizzy were going to do a secret gig at small club in the centre of Stockholm. We made it in somehow and we’d never seen Lizzy so close up before. It was amazing, so loud and heavy! It was the first time I saw John Sykes with Lizzy – and this on a small stage in a rock club. They opened with this song, which has such a great heavy riff. The song has got an almost punky attitude and the fast pace vocal is amazing. With Sykes the band had a new found attitude. But the lasting memory of that night was that I got to meet Phil Lynott in person. After the show, he was standing by himself next to the dance floor just looking a bit forlorn. I just couldn’t let this moment go to waste. Nervous as hell I walked the 10 metres across the dance floor (which felt like two football pitches) to reach the man himself.

I asked him something like, ‘I really love your voice and your singing, but I’m just curious, did you ever consider having a singer in Thin Lizzy?’. Of all the silly questions! But what the hell, it was done and I was sure something sarcastic would come back at me. But instead he was very humble and polite. First off he said, ‘Thank you’ (for my compliment regarding his singing), and then named a number of singers that had influenced him and that made him want to be a singer himself. I think I recall Fats Domino as one the names, but I was so high on life that moment I couldn’t take everything in. But one thing I took with me from that encounter was to always try your best to be friendly with your fans. Cause there I was, just a kid really, only 19 years old and my first ever experience of this kind, meeting one of my biggest heroes… and he treated me kindly!

RENEGADE (Renegade, 1981)
When Thin Lizzy came to town (Stockholm) we would always try and see them live. The Renegade tour/show was probably the third or fourth time I’d seen them live, but it was still as great as ever. We took the train from Upplands Vasby, our home town. It was usually John Norum, John Leven and myself from the band and a couple of our friends travelling on the train. It took us about 40 minutes to get to the venue which gave us enough time to down some beers and talk about the songs and the musicianship of this remarkable band. By that time we hadn’t yet changed our band name to Europe; we were still called Force and were just kids ‘dreaming hard’ of becoming a touring band like Purple and Lizzy. That night we stood in the fifth row banging our fists in the air. The title track Renegade is probably my favourite song on the album, but due to the new band member Darren Wharton’s excellent keyboard work on it, Angel Of Death is also up there as one of my favourites. I believe they opened the show with that song. But Renegade is still today a wonderful piece of work. It’s got that vibe.

JAILBREAK (Jailbreak, 1976)
With a guitar riff as effective as the one in Smoke On The Water, Jailbreak is just one of those classic rock songs every band will jam on sooner or later. We had the absolute honour of having Scott Gorham joining us on stage as a special guest at we headlined Sweden Rock Festival 2013. I just love Scott’s laidback and musical playing. Greatness is not only in the playing. Scott together with guitarists like Jimmy Page, Joe Perry amongst many other also have those certain moves on stage. They simply look and move around so cool and effortlessly on stage and at the same time delivering the best playing on the planet! Performing Jailbreak that evening with Scott was one of the highlights of Europe’s career.

BLACK ROSE (Black Rose: A Rock Legend, 1979)
For us in Europe, it was always special when Gary Moore joined forces with Phil Lynott. John Norum was the big fan of Gary and we all followed Gary’s solo career through John. Musically I think Thin Lizzy’s Black Rose album is one of their strongest ever. Songs like Waiting For An Alibi, Toughest Street In Town, Got To Give It Up and of course the anthem itself, Black Rose, just made this a true classic rock album, and probably my favourite Lizzy album of them all. The arrangement, guitar playing and musicianship on the title track is amongst the best I’ve ever heard! It inspired me as a songwriter to always incorporate melodies in my own songwriting.

DANCING IN THE MOONLIGHT (Bad Reputation, 1977)
Dancing In The Moonlight is just one of these track that does not really fit in in any category. It’s just simply a great tune. Some songs just live in their own universe and have their own destiny. This was kind of different from Lizzy’s other tracks but I loved it. It was kind of laid back with an almost swing like feel. Lyrically It also painted a picture of our youth in the suburbs of Stockholm. This song has got one of my favourite vocals by Phil Lynott. The natural flow of the words, the complete conviction and believability in the deliverance. The sound and tone of the voice is so unique and lovable. This song came on the stereo many a time at our late night get togethers.

OPIUM TRAIL (Bad Reputation, 1977)
There is something special when the dark and abstract comes together with the melodic and accessible, like on this song from Bad Reputation. It has some really vibey guitar work and solos. We all know by now that the band were no strangers to certain substances and I don’t think it’s possible to write a song like this unless that was the case. But that reminds me that I also recall Phil on many occasions asking us the audience to stay away from alcohol and drugs, usually before playing the song Got to Give It Up from the album Black Rose, another favourite of mine. I also love John Norum’s cover version of Opium Trail on his Face The Truth album.

SUICIDE (Fighting, 1975)
In 2008, we did a show in Stockholm we called ‘almost unplugged’. We were going to perform re-worked Europe songs with a string quartet, and we also wanted to incorporate four cover songs by artists that had meant a lot to us and had inspired us over the year. All five of us had to agree. That wasn’t easy. But in the end we settled for Since I’ve Been Loving You – Led Zeppelin, Wish You Were Here – Pink Floyd, Love To Love – UFO and the fourth track we decided on was Suicide by Thin Lizzy. I played the second guitar on the song that night which was a fun challenge in itself.

THE BOYS ARE BACK IN TOWN (Jailbreak, 1976)
This track has been played so much over the years, and has been used for everything under the sun. Probably their best known song and I just have to include it in this list. I find that because from what I understand this song was never meant to be a hit, and almost didn’t make onto the record, it was made and played with such carefree attitude, free arrangements and several unique sections and solo parts. The work in itself never tries too hard or is over confident. But one thing is certain. This song showcases the strengths of one of the mightiest rock bands in history with the distinctive yet soulful shuffle beat of Brian Downey, the amazing dual lead harmony guitar playing by Scott Gorham and Brian Robertson, The exceptional natural rambling and soulful vocal by Phil Lynott who’s storytelling just grabs you. What would the world be without songs like this?

BAD REPUTATION (Bad Reputation, 1977)
I find that Scott Gorham and Brian Robertson’s playing on this whole record is nothing short of phenomenal. The writing had gone tougher on this album and I remember listening to it and how it made me feel. listening to Phil Lynott’s lyrics and attitude made me feel like I was the king of the world, that anything I put my mind to was possible! Also, the thing that set Thin Lizzy apart from the rest of the bands out there was the drumming of Mr Brian Downey which is showcased so perfectly on this song. Nothing he plays is unnecessary. Every groove, every drum fill he does is needed to bring the song to the highest level. So distinct yet groovy that you just get blown away every time. With the song Bad Reputation Brian Downey and the boys shows of this band at their best. Hard rock does not get any better than this!