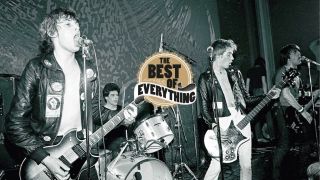 My sister bought me Stiff Little Fingers’ first album, Inflammable Material, just after it came out in 1979 and I instantly fell in love with it. I was just starting to get into punk, but I’d never heard anything like this. Coming from Northern Ireland, the fact that they were from Belfast made them even cooler to me. I just thought ‘Wow, these guys are from the same place as us and they’re singing about it and they sound amazing.’

When the second album, Nobody’s Heroes came out I went out and bought it straight away and I sneaked into Belfast without my parents’ permission to see them play at the Ulster Hall. I was absolutely terrified: I was a skinny wee 14 year old country yokel from Newtownards in the city on my own at the height of the Troubles, and I was surrounded by all these crazy punk rockers. But when they came onstage I’d never seen or heard anything like it in my life and immediately I wanted to be [SLF frontman] Jake Burns. I thought ‘This is what I have to do.’ That moment was literally that defining. I went home the next day and asked my dad if he could lend me some money to buy a guitar, and that was it, I was away. And it was all Stiff Little Fingers’ fault.

When we started doing interviews with my old band The Almighty we’d get asked about the bands that inspired us, and it’d be Thin Lizzy, AC/DC, Motorhead, Ramones, The Clash and Stiff Little Fingers. So the guys must have noticed us name-checking them constantly, and they checked us out: Henry Cluney, the original guitar player, came down to one of The Almighty’s earliest London gigs and we were invited to the next SLF show to meet Jake and the rest of the guys and we became good friends.

So now this week my new band Ricky Warwick & The Fighting Hearts are going out on tour with SLF. It’s my 50th birthday this year and it’s amazing how things have come full circle and I’m getting to go out with the band that really started it all off for me. I’ve been very lucky with my career, and I’ve pretty much met everyone I ever dreamed of meeting, but if you’d told me when I was 14 that I’d get to play even one show with Stiff Little Fingers I’d have bitten your arm off!”

“I’ve started with a song from the band’s current album No Going Back, because I think it’s as good as anything they’ve ever done and shows that they’re just as vital as songwriters now as they were 30 years ago. I got to sing backing vocals on the album, which was such a privilege and a real dream come true. This is a song Jake wrote about depression, and it’s such a powerful song lyrically. Anyone who’s ever known anyone that suffers from depression will relate to it.”

“This is from the Now Then album, which was the last album the band put out before they split up originally in 1983. Some SLF fans had lost interest by then as they felt the band had gone too commercial, but there’s some brilliant songs on there, and this is one of the standout tracks. It’s a story about kids from broken homes, and it captures a real sense of the darkness and despair that was present in Britain in the early ‘80s.”

“Back in the day bands used to put out singles that weren’t included on albums, and this was on an EP called the £1.10 or Less EP. It’s just a great pop song, with a huge chorus. Stiff Little Fingers were always great at writing big anthems, and this should have been a massive hit, particularly in America, because it’s almost got an arena rock vibe to it. I was never one of those punk snobs who didn’t understand that punk was about evolution and change, that it was more about an attitude than a fashion statement, I got that you could still be a punk with songs that were more melodic.”

“I love this song. The guitars are just so in-your-face from the start and you can hear the six inch nails in Jake’s voice, with his throat almost torn from the raw emotion of what he’s singing. The lyric is kinda ironic for me, because Jake’s a friend now, and I love him dearly, but I still look at him sometimes and think ‘Fuck, it’s Jake Burns!’ He can sense when I’m doing it too, I’ll have had a few beers and I’ll start saying ‘Your band…’ and he’ll be like ‘I know, I know, fuck up Ricky!’ because it’ll be the seven hundredth time I’ve told him how much the band mean to me. But this band defined who I’ve become, and that’s huge, so I’ll never stop telling him.”

“Basically when I heard this I shit my pants! I remember going out and buying the Nobody Heroes album and putting it on and getting so worked up jumping around the room to it that my dad had to tell me to calm down: ‘Sit down and have a drink of water son!’ The opening line is ‘Back when I was younger they were talking at me, never listened to a word I said…’ and when you’re 14 every lyric in this song could be lifted from your diary, it’s everything you’re feeling and thinking. I remember seeing them doing it on Top Of The Pops and you have that weird feeling of ‘Isn’t this amazing!’ coupled with the ‘Oh no! They’re not just ours anymore!’ that you used to get when your favourite band started breaking through. It’s an amazing song, and I still get the same feeling of excitement every time I hear it.”

“I’m going to go with the version from the live album Hanx! That and Thin Lizzy’s Live and Dangerous were the first two live albums that I ever got, and I loved them both: Hanx! is such an under-rated live album, it’s phenomenal and it captured Stiff Little Fingers in their prime back then. It’s a love song about a Catholic and Protestant in Belfast at the height of The Troubles, and it’s got this amazing doo-wop middle eight which is almost Chuck Berry-ish, and great lyrics: ‘All you give me is barbed wire love.‘ The crowd participation here makes this top-notch.”

“An amazing song from the Inflammable Material album which my old band The Almighty actually covered as a B-side . I just love the pure snarl and energy in this track, and the angst in Jake’s voice really drew me in. It’s got a great guitar riff - almost a metal riff - and a great groove. As a teenager growing up in Northern Ireland you listened to this song and it hit home only too well: you just thought ‘That’s me, that’s what’s happening right now’, you could totally relate to every word.”

“The opening track on Inflammable Material and therefore the very first piece of SLF music I ever heard. From the opening riff I was hooked. An utterly explosive song, which took such an unflinching look at what was going on in Northern Ireland at the time. Punk rock gave kids from both sides of the community something positive to direct their anger and frustration towards, and Suspect Device is simply one of the finest punk songs ever.”

“I have to go with Alternative Ulster as number 1. I’ll never forget hearing this song and reading those lyrics for the first time. I actually got up to play this song with the band a few years ago at the Ulster Hall in Belfast [footage below], where I saw SLF for the first time, which was a big moment for me. Jake introduced it with the words ‘Please be upstanding for the national anthem’ and it really should be the national anthem in Northern Ireland. What a song!”

Ricky Warwick & The Fighting Hearts will be supporting Stiff Little Fingers on their UK tour in February/March.