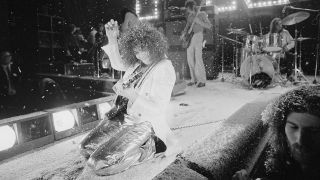 Marc Bolan was a huge star, but Sunken Rags is a very obscure track. It was the B-side of the T.Rex hit Children Of The Revolution. Bolan had the best B-sides anybody has ever written: B-sides that should have been A-sides. And Sunken Rags is just a great, driving rock song. I haven’t a clue what the title of the song means, or the lyrics. But I loved that stream-of-consciousness thing that Bolan was doing in his lyrics. He picked words not because they meant something, but because they sounded good. And that’s what I did with Pour Some Sugar On Me.

I saw the cover of Jobriath’s debut album in 1973 and I thought: this is Bowie. The two albums he made had some of the most astonishing songwriting I’ve eve heard, and Space Clown is very theatrical. It sounds like it belongs in a Broadway play. Peter Frampton and John Paul Jones from Zeppelin played on his albums, but Jobriath didn’t sell a record. He was the tragic figure of glam, and in 1983 he died from AIDS – one of the first.

Chicory Tip were the most ridiculous band in the world. They wore capes that would have made Rick Wakeman blush. But the man behind it all was Giorgio Moroder, who became a synthesiser god and went on to do the Cat People movie soundtrack with Bowie. Good Grief Christina was the third of Chicory Tip’s three hits: Son Of My Father went to No. 1; this only got to No. 17. It’s brilliant for all of the wrong reasons. It’s like really bad Abba – but before Abba. And what this kind of music eventually turned into was Nine Inch Nails. Yes, really.

John Rossall was the main guy in the Glitter Band, who played on (the now disgraced) Gary Glitter’s hits. He was also the first to leave for a solo career. I Was Only Dreaming is a little more musical than the Glitter Band, and the way Rossall sings, he’s trying so hard to sound like Bowie – when Bowie was trying to sound like Anthony Newley. When I was 15, this song was played to death on Radio Hallam in my hometown of Sheffield. Every girl got up to dance to it at school discos. I thought it was a hit, but surprisingly, it didn't even make the top 100.

Kenny were a completely manufactured band – in a way, they were like Milli Vanilli. But they had a few hits. I remember The Bump and Fancy Pants being absolutely massive. And Baby I Love You, OK! has got everything that a glam rock song should have – the Beach Boys harmonies, the Sweet guitars, the handclaps. It’s simply a great pop song full of big, loud, distorted guitars. It’s the kind of music that would give Led Zeppelin fans the horrors. But really, Kenny were never supposed to be taken seriously. They were so chicken-in-a-basket, they made Showaddywaddy look like Pink Floyd.

Before Midge Ure was in Ultravox – and before he co-wrote the Band Aid song Do They Know It’s Christmas? – this is where he got his start, as a kind of Division Two Bay City Roller. Boogiest Band In Townis a pop song pretending to be a rock song – which is really the essence of glam. And it was written by Bill Martin and Phil Coulter, the guys who wrote the Bay City Rollers’ early hits, so it’s probably a Rollers reject. But a lot of songs got offered around back then. Sweet turned down Tiger Feet – said it was shit. And then Mud had a No. 1 with it.

Glam in the early 70s was very much a British phenomenon. The campiness didn’t work so well in America, as Jobriath discovered. But there were some US rock bands that crossed over into glam in the 70s. Kiss, certainly. Angel wore the white silk, had the fluffy hair and covered All The Young Dudes. There was also Starz. They were a real hard rock band, a little like Montrose. Nikki Sixx worships them. And Cherry Baby had the lightweight guitar work that glam relied on. It’s just a very cool kind of pop rock song.

If you throw a dart at the map of glam, the bull is 1972. (You Really) Rock Me is from 1979, but then, Nick Gilder did grow up in Canada, where they were always a bit behind. This is a great song from an era when pop music and loud guitars went hand in hand. There’s a brilliant guitar lick at the beginning, and although the verses are very fey, the chorus is so huge you can imagine Queen doing it. It sounded to me like Nick Gilder wanted to be a hard rock David Cassidy – and there’s nothing wrong with that.

When you hear this song, you’d never believe it was recorded just a few years ago – and by an Italian band. I got the Giuda album, Racey Roller, in 2011 when Leppard were on tour in America. It was a gift from a couple in Cleveland, Ohio called Weird and Gilly – they’re big Bowie fans. And when I heard it, I was pissing my pants laughing, because it’s so brilliant, so exhilarating and fun.

Def Leppard's greatest hits collection, The Story So Far: The Best Of will drop on November 30. The double disc set will feature 35 tracks – including their cover of Depeche Mode classic Personal Jesus.