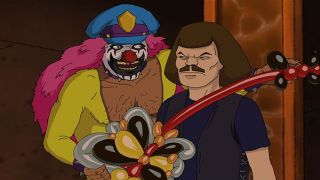 Metalocalypse debuted on Adult Swim’s late night lineup all the way back in 2016, introducing us to Dethklok, the greatest (animated) metal band of all time. What followed were four seasons of ultra-violent, ear-punishing videos, and knuckle dragging rock star narcissism.

Featuring a legion of guest appearances from the likes of James Hetfield and Kirk Hammett, Ihsahn, Devin Townsend, King Diamond, Mike Patton and George “Corpsegrinder” Fisher, and bristling with razor-sharp wit and howl-inducing parodies, Metalocalypse spared nobody from its withering barbs.

To celebrate Adult Swim kindly making the entire run of Metalocalypse available to stream for free due to the current pandemic, we count down our ten favourite Dethklock moments.

After the rest of the band are savagely dispatched by a murder of crows, frontman Nathan Explosion finds himself working the counter at fast food giant Dimmu Burger. When a fan (voiced by Corpsegrinder) recognises the singer and (along with the manager) taunts the ever-loving shit out of him, he burns his face off by accidentally washing himself in the deep fryer. Mercifully, it all turns out to be a dream, but still, br00tal…

9. Scream For Your Cream

The only event that could possibly rival a Dethklok music premiere in terms of both scale and mass hysteria would be if both world peace and the discovery that beer cures cancer occurred on the same day.

Throughout the series, the members of Dethklok score endorsement deals for everything from doorknobs to the United States nickel, but all such agreements pale in comparison to the band’s partnership with Duncan Hills Coffee.

This clip showcases not only the typical beyond-over-the-top Dethklok CD release party (including numerous grisly fatalities), but a chugging, fist-pumping coffee jingle, to boot.

When Nathan insists that the band re-record their new album entirely underwater in the Mariana Trench, (because it’s the “heaviest, deepest most brutal part” of the ocean) the secret Tribunal spying on Dethklok sends in Dick “Magic Hands” Knubbler to produce the album.

Before joining Dethklok, the Wisconsin-bred drummer Pickles played in Snakes N’ Barrels, an ‘80s hair metal outfit that bears more than a casual resemblance to Guns N’ Roses. When a Behind The Music documentary resurrects his old band’s popularity, Pickles rejoins them for a reunion gig, inspiring bitter insults and petulant resentment among his current bandmates.

Before the reunion gig, Snakes N’ Barrels consume some “totally awesome Sweet Alabama Snake” – a psychotropic drug so potent that it scrambles the brains of everybody in the band except for Pickles, whose heroic drug use has rendered him impervious to its effects. Their hit song, Water Horsey Blues, could easily have been a boozy outtake from the cutting room floor of GNR’s Use Your Illusion sessions.

It's Murderface's birthday and the band can't figure out what to get him, so they throw him a party and get him the "blackest present for the most brutal of bass players... Nothing". Turns out he didn't want disappointment, who knew?

5. Dethklok Go To The “Food Library”

Most people with any prolonged contact with Dethklok die horrible, blood-spattered deaths and in the show’s premiere, The Curse of Dethklok, we see their loyal chef Jean-Pierre sucked into the rotor blades of the band’s helicopter and chopped to pieces (he miraculously survives).

Believing that without their chef, they might die of starvation, the band heads to the local supermarket (called Finntroll’s), where Nathan grimly states, “We have to do our own shopping so we can make our own dinner, like regular jackoffs do.” Determining that they are in a “food library,” they spend the trip pissing in the olive bar, hurling invectives over the PA system, stocking up on booze and hitting on elderly women.

While we adored the band’s grotesque sense of entitlement and their sociopathic disdain for their fans, amongst themselves the band revel in a boyish playfulness that cuts sweetly against their druggy, sex-fuelled rockstar lifestyle.

In the middle of an important band meeting, Nathan interrupts manager Charles Foster Offdensen and proceeds to render his bandmates utterly dumbfounded when he shows off his newest trick, causing the meeting to spiral into morass of profane disbelief and really stupid human tricks.

After years of prodigious drug and alcohol abuse, the band visit their doctors for a day of poking and prodding, yet none struggle more than Murderface. As the doctor inspects his testicles, bassist William Murderface finds himself inexplicably aroused and despite his most fervent efforts, he is unable to contain his enthusiasm.

Frustrated that he’s frozen out of the band’s songwriting process (even though he’s never written a song for the band), Murderface enlists rhythm guitarist Toki Wartooth to co-write a track for the band’s upcoming release, which they nervously pitch to the band.

The song, Takin’ It Easy, showcases Small’s sublime brilliance for satire in that it’s credible enough to be a hit, yet the precise kind of hit that would send most metalheads into fits of spittle-drenched derision. While the band takes a pass and the song doesn’t appear on any of the Dethklok records, Nashville Pussy covered it on 2014’s Up The Dosage.

Dr. Rockso talks like Paul Stanley and sings like David Lee Roth, inspiring his own Behind The Music documentary and a slew of episodes featuring him spiralling ever deeper into the humiliating depths of his cocaine addiction. But before supporting his habit by giving “HJs” to passing motorists, the clown formerly known as Leonard Rockstein became famous as the frontman for Van Halen clones, Zazz Blammymatazz.

In the season one episode, Dethclown, the Tribunal hires Rockso to steal confidential information from their manager, so he distracts the band with a video for his new single, I’m Just A Rock N’ Roll Clown, in which he skis down mountains of blow and snorts cocaine until his nose bleeds. The video is a brilliant VH parody that, as Rockso explains, was banned from music television because you could see his junk through his meat suit.