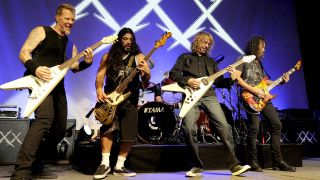 Brian Tatler can remember the first time he heard Metallica cover one of his songs. Diamond Head were in the studio, and a 12" of Creeping Death arrived in the mail from Lars Ulrich. On the b-side was a song driven by one of his own riffs, Am I Evil?

"We had no idea that Metallica were going to become the biggest band in the world, he says. "At this stage, in 1984, they were on Music For Nations, and it didn’t look like they had the potential to conquer the world – to us."

Metallica went on to record a trio of Diamond Head songs: Helpless, The Prince and It’s Electric.

"I’m thankful that they did," says Tatler. "Because I don’t know what I’d do without the songwriter’s royalties of those four songs they’ve covered!"

"I grew to like this song a lot when I saw them several times on the ‘…And Justice For All’ tour of 1988/89. I saw them maybe four or five times on this tour, and this was a new one to the set, but it worked really well. Happy days."

"A difficult riff to play, especially at the speed Metallica play it live! I have been teaching guitar for 10 years, and kids often want to learn how to play Master Of Puppets or Battery. I think it’s ironic that I may have inspired Metallica, but I ended up teaching kids how to play their songs! D'oh!"

"This is full of great riffs, I particularly like the chorus riff under the lead vocal. I went to the Fan Club show at the o2 London in 2008, where tickets were just £5. Death Magnetic had just been released and this song made an impression on me."

"This song was recorded a whole semi-tone down (DGCFAD) and the ultra-heaviness really works well. It’s a really stomping, power song that is great live. I believe this was Jason Newstead’s favourite."

5. For Whom The Bell Tolls

"Always a live killer. You cannot fail to be impressed by the quality of the song and how well it works live. I reckon I have seen around Metallica 24 times, and they always play this one. It sounds great."

"Lars invited me to go see Metallica when they played Birmingham Odeon on the Master Of Puppets tour in 1986. I went backstage and got to meet the rest of the band, including Cliff Burton. They opened the show with this beast of a song, and I was pinned back by its power and speed. It’s another difficult riff to play, I have always been very impressed by how good James Hetfield’s rhythm playing is."

"This is the first record I got by Metallica. I loved how fast and exciting it was, and the wonderful Sabbath-esque middle eight. Lars sent me a copy of the Creeping Death 12” single in 1984 when they were still signed to Music for Nations. It had a fine cover of Diamond Head’s Am I Evil? on the B side."

"I have got to hand it to Kirk: millions of guitarists, and we all missed this beautifully simple, classic, catchy riff made up of three notes! Great arrangement."

"This is my favourite Metallica song, it has great dynamics and builds beautifully to the climax. The double kick drum pattern was a game changer in metal music. I love the rhythm guitar work."