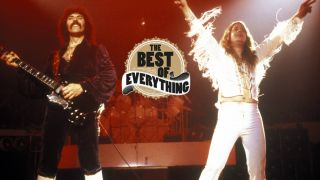 If someone put me on a desert island and I could only listen to one band, it would be Black Sabbath.

They definitely made the template for all the music that I listen to. They were the prototype, and it’s impossible not to be influenced by them. I can’t really name any exact things that Kvelertak stole from Black Sabbath, but they’re definitely in all our music, somewhere.

**SNOWBLIND **(Vol. 4, 1972)
This is my favourite Black Sabbath song ever, so it has to be the first one on the list. I’ve been discussing it with the rest of the guys in the band, and we came to the same conclusion. It’s so fucking good: the riff, the lyrics, everything. It’s awesome.

**N.I.B. **(Black Sabbath, 1970)
Moving on to the next song, which has got to be Nativity in Black. The opening bass riff is so great: it just gets stuck in your head. It’s from the first album too, which is so fucking raw. It was so ahead of its time. It’s insane.

**CHILDREN OF THE GRAVE **(Master of Reality, 1971)
This is the last song on first side of Master of Reality. Again, this is a really great song. We covered it in a previous band that I was in before Kvelertak, and I sang vocals on it. It was kind of a mess to be honest, and I sort of regret covering it because it’s such a cool song, and I wish we could’ve done it better. But this was some years ago now, and it was fun to do at the time.

**PARANOID **(Paranoid, 1970)
What can I say about Paranoid that hasn’t already been said? Well, there’s a honking sound in the song at the end of the main riff, and whenever I listen to this song whilst driving my car I have to turn around and look out for other cars because I think someone is beeping at me. That can be pretty distracting when you’re in heavy traffic! It’s a stone cold classic though.

WHEELS OF CONFUSION (Vol. 4, 1972)
This is the opening track on Vol. 4, and it’s a long one. But I just love the groove. It’s almost progressive in a way, but the groove is really rocking.

SWEET LEAF (Master of Reality, 1971)
Sweet Leaf is stoner metal at its best. That intro is killer, too. There are lots of great covers of this song, but you simply can’t beat the original. Master of Reality was basically the blueprint for all stoner and doom metal.

IRON MAN (Paranoid, 1970)
Another song from Paranoid. Like the song Paranoid, I was wondering whether or not I should put this in the list. It’s kind of an obvious choice, but you just can’t deny its power. I’ve heard it way too many times, and it’s certainly not my go-to Sabbath song – but that riff is just so iconic. It’s probably one of the first riffs that everyone learns to play on guitar.

**LORD OF THIS WORLD **(Master of Reality, 1971)
This is a deep cut from the Master of Reality album. I’m no Sabbath expert, and I’m not 100% sure what the lyrics are about, but I like the lyrics to this song a lot. The riff is absolutely killer, too. And what a great title for a song: Lord of this World. That’s what I want to be – but Ozzy beat me to it!

**BLACK SABBATH **(Black Sabbath, 1970)
We’ll end where it all began. This was the first song that I heard by Black Sabbath, and I’m sure like everyone else, I was just blown away. It still sounds so scary: the sound of the rain, that riff, Ozzy’s haunting vocals. The first time I heard this song on the radio it opened my eyes to the power of heavy metal, and after hearing it once I never looked back.

Erlend Hjelvik was speaking to Matt Stocks. For all the latest news on Kvelertak, visit their official website.