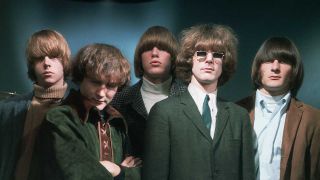 Like the decade in which it unfolded, the West Coast – or California – sound started with breezy sunshine and ended in existential darkness. Consider how the Beach Boys summed it up. In 1962 they were loading up their woody with surfboards, singing their songs; by 1971 they were a cork in the ocean, lamenting the deep valley that “killed their soul”.

The surf-pop explosion that rolled in with Wipe Out and Surfin’ USA began a high-speed evolution with countless stylistic twists and turns, and bands that were both durable and dodos. But the cream of the West Coast sound was produced between 1965 and ’68, in a time when the light was first merging with the dark. In Los Angeles, that meant everything from The Byrds’ jingle-jangle and The Doors’ hippie poetry to the Flying Burrito Brothers’ cosmic country and The Ventures’ twangy themes.

Up the coast in San Francisco, Jefferson Airplane were supplying the fuzzed-out soundtrack to Ken Kesey’s acid-test parties, and the Grateful Dead were jamming to the pulsing blobs of psychedelic light shows. Spinning in their freak-out orbit were Moby Grape, Quicksilver Messenger Service, Big Brother & The Holding Company and It’s A Beautiful Day. And although California laid claim to 95 per cent of the West Coast sound, Portland, Oregon gets an honourable mention for memorable garage rock contributions from The Kingsmen and Paul Revere & The Raiders.

Even though these West Coast bands embraced the emerging LP format (with songs that were sometimes very long-playing indeed), many of their albums now have the feel of being musty time capsules. Over the years their legacies became better represented by singles. The lovely White Bird is enough to satisfy the It’s A Beautiful Day itch, and three minutes of Incense And Peppermints is plenty of the Strawberry Alarm Clock. So in assembling a Buyer’s Guide it seemed necessary to diverge from the well-worn, flower-strewn path and bring in a few lesser-known albums by such artists as The Seeds and the Gosdin Brothers.

Considering this rich, divergent catalogue of music 50 years on, the words of Grateful Dead lyricist Robert Hunter seem more appropriate than ever: “What a long, strange trip it’s been.”

Essential (The classic albums you need to check out)

What happens when some Greenwich Village folkies move to LA, get electric instruments and paisley shirts and start singing close harmony? Dubbed folk rock, the new sound that McGuinn, Crosby, Clark and Hillman created was half-Dylan, half-Beatles, all charm. Although Highway 61 and Rubber Soul may rank as 1965’s silver and gold medallists, The Byrds’ debut is equally impressive, almost playing like a Greatest Hits collection: All I Really Want To Do, I’ll Feel A Whole Lot Better, Bells Of Rhymney. The seed for Big Star, Tom Petty and R.E.M.? You bet.View Deal

One of the best album openers of the decade, Alone Again Or… sweeps in on an unsettling folk-meets-flamenco wind, an overture for this anti-California masterpiece. No hippies, surfboards or sunshine, just Arthur Lee and company channelling the alienation and paranoia of LA through a dream-warped looking glass.

There are elements of classical, rock and folk, sometimes within the same song, full of blind alleys and fake-outs. Few bands have ever sounded as powerfully possessed as Love on Forever Changes. A wholly original album that’s accessible.View Deal

The Seeds’ version of 1966 sounds like a forecast of London and New York City circa 1977; the agitated attitude of some absolute beginners who just want to make some noise.

Call it proto-punk, garage rock, whatever, 50 years on it’s still thrillingly raw. With singer Sky Saxon leading the charge, the best songs – Pushin’ Too Hard, Can’t Seem To Make You Mine, Evil Hoodoo – sound salacious and scraggly. Back when rock was still mostly holding hands and kissing, this is like going all the way in a room with peeling paint and a bare bulb.View Deal

Every scene needs a song to carry its message to the world. The Airplane’s second album provided two. Somebody To Love and White Rabbit, delivered in former model Grace Slick’s confident wail, were the twin clarion calls for San Francisco rock.

Recorded mostly live, the album struck a pitch-perfect balance between Slick’s extroversion and Marty Balin’s softer folk offerings, such as How Do You Feel and Comin’ Back To Me.

Surrealistic Pillow is one of the West Coast sound’s most durable albums.View Deal

The stylistic net that Spirit cast on their 1968 debut seemed to catch a bit of every trend of the moment – free jazz (Elija), Indian raga (Girl In Your Eye), effects-drenched mind tripping (Topanga Windows) and overall heaviosity (Mechanical World, which listed its playing time as “very long”).

The Los Angeles-based quartet were spearheaded by singer/songwriter Jay Ferguson and 16-year-old guitar whizz Randy California, who channels some of his friend Jimi Hendrix’s vibe on the limber, fuzzed-out solos on this album.View Deal

“Everybody was a fucking genius at what they did, but we just didn’t get it on record,” Neil Young said of his first band, Buffalo Springfield.

Although their brief two-year run was marred by squabbles, egos and drug busts, they did capture a lot of the genius on this second album.

Young contributes two gems – the rollicking Mr. Soul and Expecting To Fly, but this is really Stephen Stills’s show. Bluebird and Hung Upside Down are West Coast rock hallmarks, rivalling anything Stills wrote for CSNY or during his solo career.View Deal

Good (The albums worth exploring)

The saxophone was once an agent of guttural, growling power in rock‘n’roll: Louis Jordan, King Curtis, The Coasters and, surprisingly, West Coast surf band The Surfaris. Yes, there are plenty of twangy guitars riding the tom-tom waves here, but instrumental classics Wipe Out, Wild Weekend and Walk Don’t Run aside, what makes this album so rousing is the sax. The swaggering brass of Yep and You Can’t Sit Down will put a smile on your face.

With all the psychedelia and heaviness associated with the California sound, it’s easy to forget that a lot of it began on the beach.View Deal

When I was in high school, I befriended an older hippie couple who used this album as a soundtrack to smoke pot and bake hash brownies. Its psychedelia-lite does invite introspection and snacking.

Like much West Coast rock, it’s overwrought and dated in places, but it’s rescued by David LaFlamme’s gypsy violin playing and some lovely mellow tuneage on Hot Summer Day and, most famously, White Bird. Meanwhile, the rich, modal sounds of Bombay Calling and Bulgaria are forerunners to world music.View Deal

On the West Coast country-rock family tree, the Gosdin Brothers are the forgotten branch. And although that branch yielded only one album, it’s a plum.

Alabama-born Vern and Rex, who had previously been in bands with Gene Clark and Chris Hillman, surround their Everly Brothers-style harmony blend with 12-string chime (Love Of The Common People), psychedelia (The Victim), bluegrass romp (Louisiana Man) and even prog-style mellotron (Hang On). And dig Clarence White’s guitar picking on Tell Me.View Deal

When Strawberry Alarm Clock were recording this albums’s groovy title track, none of the band members sounded right on lead vocal. So a guest in the studio, 16-year-old Greg Munford, stepped in. That tells you all you need to know about the haphazard, only-in-the-60s trajectory of this one-hit-wonder group.

The album glops on a sickly-sweet overload of psychedelia – Farfisa organ, fuzz guitars, tambourines – over such cringeworthy lyrical couplets as ‘Stretch out your mind, feel good/Utopia’s at my doorstep’.View Deal