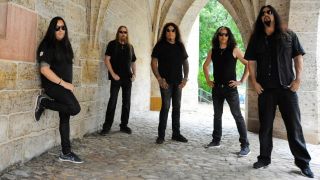 With the release of their eleventh studio album Brotherhood Of The Snake set for release on October 28 through Nuclear Blast Records, Testament frontman Chuck Billy gives Metal Hammer an in-depth look at the thrash legends’ new material. Aliens and all.

“The last record we did had a lot of mid-paced stuff, so we thought this time we needed to spice it up a little bit,” Chuck tells Hammer. “So going into this record we wanted to be thrashier and the drums heavier. Then we got fascinated by a show called Ancient Aliens, which is all about these theories to do with aliens and religion, and I found this book called Brotherhood Of The Snake. It’s about this secret society from thousands of years ago that were formed to debunk religion, it’s saying there is an alien race that is using humans as slaves and mine us for minerals. And we thought that was something we could write a pretty cool album about. It did start off as a concept record, but we thought that we couldn’t continue to write about that. It just became a cool jumping off point.”

Brotherhood Of The Snake

“The first track and the title-track. When we went into the studio this was the only song that was complete. We came off the Slayer tour and we were going to release it as a single, but we decided to hold off on it. But that was the first one done, the first lyric, and it just set the tone for what we wanted the album to be.”

“This is one that Eric (Peterson, guitar) wrote. It’s basically about an alien king, Anu, coming down and making humans what he wants them to be. It’s came out pretty different to what Eric originally had in mind, but I write the lyrics so I turned it into the alien concept. Musically, like all of them, there isn’t a regular pattern. Lot of different riffs and patterns together. But it works.”

“That’s basically about the upcoming elections. You know, Alex (Skolnick, guitar) and Eric would have arguments about Donald Trump. It was always going to be one of those songs that was a rebellious song, about the people standing up together for an uprising. It’s about the idea that it doesn’t really matter what the people want because they aren’t being served anyway.”

“This was actually the last track written in the studio. When Eric and Gene (Hoglan, drums) tracked it I realised that it was this really long song. So I had this book, The Seventh Seal, and I decided to use that. The seals and the breaking of the seals. It’s about God and The Devil fighting and they say that when god wins he can break the seven seals, and once the seals are broken, so the Revelation says, it’s the end of the world. So it was just another cool idea that fitted the whole idea of the album.”

Born In A Rut

“It’s a little double meaning, because it’s about Mother Earth taking a beating from mankind. You know, from global warming and all that kind of stuff. But also it’s about the weapons that mankind has made over the years, from sticks and stones to steel and blades to now bombs. It just grew and grew, and now bombs are much more of a threat to Mother Earth than just sticks and stones. It’s about the abuse of our planet.”

“I wrote that song four times, four different melodies and four different sets of lyrics. Eventually we found the right sound. It’s about gambling with your life, using a poker reference to say that everything that you do in life is a gamble. That you have got to take risks.”

“This was written about a year before we went into the studio – it was left over from the Dark Roots Of Earth sessions. But I had never written any lyrics to it. So when we wrote it, it was around the time we went and got Osama Bin Laden. It was Seal Team Six, and the mission was called Neptune’s Spear. So it’s about that team getting their Intel together and, you know, one shot kill.”

“That’s pretty self-explanatory. Last year I got my medical marijuana card, and people said to me ‘Now you can go get the app’ and, it’s like Uber, you see who there is around you that is selling weed and can deliver it to your house. You hit the button and you get a menu, and you can order it right to your house. You see a place like Colorado, and it’s doing great. Crime is down, the economy is up. Canna-business! It’s just something that happened in my life, and it sounded really catchy.”

“That was kind of a weird one, it’s such a repetitive song. I came up with the ‘fourteen days, fourteen lives’ line before I came up with anything else. I sat down with Steve Souza from Exodus and he said that if I wanted to go with this fourteen day thing then it should be about a serial killer. It’s just about a killer that kills a different person every day for fourteen days.”

Testament’s new album Brotherhood Of The Snake is out October 28, via Nuclear Blast.

Houses Of The Unholy: Chuck Billy