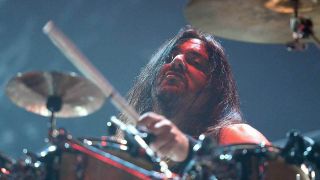 New research has found that playing the drums increases an adult’s white blood cell count, therefore boosting their immune system. Who better to analyse the truth of these claims than Gene Hoglan, aka The Atomic Clock and The Human Drum Machine? From playing in Dark Angel, to Strapping Young Lad, to Fear Factory, Dethklok and Testament, he’s metal’s most badass and fastest gun for hire. Plus, he can play a mean coffee table…

Do you agree with the idea that drumming boosts your immune system?

“Well, I have absolutely amazing health from drumming, because it’s so cardio-oriented. I have equated what I do, especially playing in some of the more double bass orientated bands, to running a marathon while screaming. Once I put a pedometer on myself, and with Strapping Young Lad I was running 18 miles a night – it was really crazy. But it is great for cardio. I fully believe it helps your immune system.”

When was the last time you were ill?

“I get the flu once every 10 years. Every year that ends in a seven since 1977! About a month ago was the first time I’ve been sick in quite some time, and I got some kind of flu stomach virus. I don’t get sick when I’m on tour and there are people dropping around me like flies. I’m really cocky about it.”

What else do you do to stay fit?

“I do a lot of extremely healthy things on the road, like taking supplements. You can’t eat the best when you’re on the road, but I drink a whole lot of water, and I don’t drink booze any more. So I can lose quite a bit of weight when I’m trying to be healthy. And I have lost a lot of weight. A few years ago when I was in Fear Factory, I got up to 410lbs. It’s a crazy amount of stone, like 30 stone or something psychotic. And now I’m down to… Jesus, about 20 stone? I’ve lost 10 stone, and that’s just from drumming and eating healthy. When I’m at home, I do try to go to the gym, but I haven’t really been home since February, so I’ve lost any sort of guns that I had. I was looking pretty gunny there for a while!”

What drew you to drumming?

“I was 13 when I got my first drum kit, and I was self-taught. They were always the most interesting instrument for me, because you can’t exactly play a riff on a coffee table, but you can play a drum beat on a coffee table. Probably Peter Criss drew me to drumming, because he was my favourite member of Kiss. I was eight when I got into them, and before I ever got my first kit, I was an amazing air drummer for four or five years.”

How does it make you feel?

“I really enjoy the aerobic aspect of it. If I’m in any other situation other than drumming, I don’t like to sweat. But when I play drums, I like to sweat, because you do feel the workout. You see everything dripping off you. For instance, when we’re out with Death these days, we play a two-hour show. As you may know, Death is chock-full of double bass. If I just eat well on a Death tour, I’ll lose weight. Testament is not as double bass intensive, but I do try to get as much of a workout as I can. I bang my head more, and put more of a show into it. For me, it’s the coolest instrument, because everybody has rhythm. I’m past the point of using my brain anymore – it’s all kind of innate. I just turn my brain off before I play, so that’s fun!”

Do you find it relieves stress as well?

“Absolutely. And I’m very fortune in that regard. Say I do get a piece of bad news before the show, or if I’m on stage and something is going wrong, all I have to do is start hitting my drums a whole lot harder, and that’s kind of relaxing. You get your aggression out that way. I absolutely believe it’s stress relief. I think everybody should go pound some drums.”

Do you prefer being a session drummer, or locking in with one particular band, like you did with Strapping Young Lad?

“With Strapping, that really felt like a band. And I loved it for that. A lot of times, in a lot of these bands I’m in, I just don’t care. You’ve got a couple of guys in charge, and I’m cool with that. My brain is being used in other places than to worry about band X or whatever. So I do enjoy being in a band, and I like being Gene Hoglan, too. I’ve always liked playing from band to band to band. And I guess that probably is because a lot of my idols growing up, guys like Tommy Aldridge and Cozy Powell, were whores. I put the ‘ho’ in Hoglan, I guess! I love playing with all sorts of different musicians. It really helps your excitement level.”

Are you looking to be in a band permanently again?

“Let me see. If that band was Queens Of The Stone Age, yeah sure. If I ever am solely tied to one band, everything will be perfectly in place, and I do hope for that. I do hope to be in a singular working project where it’s so awesome and it takes up all of my time and all my music ya-yas are going full tilt. Because that’s a part of it, too.”

Is drumming better than sex?

“Hey, come on now! What is? It’s definitely nowhere close to as cool as sex. Don’t let me get that wrong. Drumming’s cool, but it’s not as cool as the other thing!”

Testament’s new album The Brotherhood Of The Snake is out on October 28, via Nuclear Blast. They will be touring the UK in Oct/Nov alongside Amon Amarth & Grand Magus.

Research shows drumming is good for your health