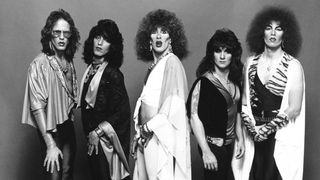 “Years ago I spent some time with Jim Marshall and people continually asked him how he invented the Marshall amplifier,” Jay Jay French told last night’s crowd. “Jim happily retold the story over and over again, in full, to anyone that wanted to know. Each time, his wife who’d heard it many times would roll her eyeballs. When I asked Jim how many wives he’d had he replied, ‘seven – because they’re all sick of hearing the story’. Now, whenever people ask about Twisted Sister’s story I just give them a DVD and tell them to fuck off! So thank you to Andy [Horn, director], you have just preserved my marriage.”

Central to the movie’s plot is the simmering rivalry between guitar slinger Jay Jay French, the elder and senior of the pair, and Dee Snider, the young, ruthlessly ambitious and hideously moustachioed lead singer who admits he wanted to “obliterate” his counterpart.

“During the movie I say that Jay Jay never actually confirmed I was a member of the band, but outside of the theatre at the first screening he gave me an official welcome to Twisted Sister,” announced Snider to huge cheers during the Q&A.

“I made The Nomi Song, a movie about Klaus Nomi [the late German performance artist and opera singer], in which Jay Jay French appeared,” he tells Classic Rock. “I had heard We’re Not Gonna Take It and I knew what they looked like, but apart from that… nothing, and I grew up in Westchester [New York]. I went to Jay Jay’s house to seek approval of the clip we’d done and ended up spending the afternoon with him, hearing their story. When he suggested making a Twisted Sister movie, it really appealed to me.”

“We liked the idea all the more because Andrew wasn’t a fan,” adds Dee Snider. “He was an objective outsider.”

“We had been turned down more times than a bedsheet in a whorehouse, and my moment of crisis came on the day of my 29th birthday,” French told the crowd at the Prince Of Wales Theatre. “I sat down with our manager Mark Puma and said, ‘You have one [more] year, I can’t handle the rejection anymore’.”

“It was a dark time,” agreed Snider. “I was married, I had a kid and we were living in a one-room apartment. It felt hopeless.”

“In 1982 we borrowed $22,000 to come over and play that show, and the people we borrowed from included some mob guys,” French says. “It was the last possible throw of the dice.”

“I didn’t know it myself,” he explained. “I had the idea right before we went on. Back then there was no Mötley Crüe, there was no hair-metal. I knew there was a resentment towards anything glammy or glittery so I decided I might take my make-up off. I told my roadie to have the remover and a towel ready at the side of the stage. The reaction of the crowd was tepid at best, it called for a really stupid gesture – and I was just the guy to do it!”

1996 was when the band’s hatred ended

During the Q&A, Classic Rock asked Snider to describe how he had felt when, in 1996, after 12 years of bitter feuding with French, he turned up on the guitarist’s doorstep to enquire about a triple platinum disc of Snider’s that had mistakenly been delivered to French. The subsequent eight-hour discussion between the group’s key players would play a significant role in their eventual reunion.

“It wasn’t that dramatic – we spoke briefly on the phone before Dee came over,” revealed French. “Amazingly, that day of our conversation was the exact twentieth anniversary of Dee first joining the band. We were brutally frank with one another. We said things to one another that had the band not already broken up, would have brought things to an end. We parted and shook hands, but I didn’t expect anything to come of it. But I did know one thing: I woke up the following morning and for the first time in twenty years I didn’t hate Dee anymore.”

On their farewell tour, Twisted Sister are moving in exalted circles

Don’t expect a part two of the film

We Are Twisted F*king Sister ends when the band signs a contract with Atlantic Records, thus missing out the juicy anecdotes from their multi-platinum years.

“We are too old for there to be a sequel,” joked Jay Jay last night. “No one will be alive by the time it comes out.”

“Doing a part two seems a little obvious,” Snider added. “The joy of our movie is that it’s unexpected. To tell those next set of tales – the band rose to success, then they fought and broke up, then they reunited – would be a bit like an MTV Behind The Music. If someone approaches us in the future then maybe, but this, this… nobody’s got a story like this.”