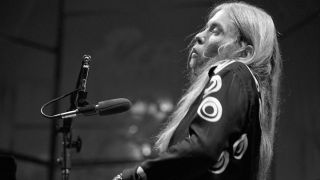 The Allman Brothers Band – Midnight Rider (From Idlewild South, 1970)
A classic tale of an outlaw desperado on the run and his final silver dollar. Though Gregg later re-recorded Midnight Rider with a horn section for his solo debut, 1973’s Laid Back, it originally appeared on The Allman Brother Band’s second album, Idlewild South, three years earlier. It’s beautifully laid back and understated, with another peach of a guitar solo from Duane. Those freedom-themed lyrics were co-written by ABB roadie Robert Payne. The song has been covered by a wide array of artists including Bob Seger, Joe Cocker, Willie Nelson, Patti Smith, Alison Krauss, Garth Brooks, UB40, Michael McDonald and… er… Bad Manners.

The Allman Brothers Band – Whipping Post (Live) (From At Fillmore East, 1971)
It’s insane to think that the 21-year-old Gregg Allman had been on the verge of quitting music until brother Duane asked him to become his new group’s vocalist in March 1969. In venting frustration at the injustice of the industry, Gregg wrote a simple five minute song that would spring to life onstage with The Allman Brothers Band, filling an entire side of the vinyl edition of their landmark concert recording, At Fillmore East. The lyrics spewed forth so quickly Allman jotted them down on an ironing board cover. “I didn’t even have a chance to get the paper out. That’s the way the good songs come – they just hit you like a ton of bricks,” he later recalled.

The Allman Brothers Band – Ain’t Wastin’ Time No More (From Eat A Peach, 1972)
Gregg wrote Ain’t Wastin’ Time No More for his brother, who was killed in a motorcycle accident as the band recorded their third studio album, Eat A Peach. Duane had been alive in the early stages of its creation but it was completed in the immediate aftermath, reportedly on a 110-year-old Steinway piano. The band are quite rightly famous for their lengthier compositions, but at less than three minutes long they exercise economy here. Its opening lyric of: ‘Last Sunday morning, the sunshine felt like rain/Week before, they all seemed the same’ revealed a world of hurt. No wonder it was used to open the album.

The Allman Brothers Band – Melissa (From Eat A Peach, 1972)
Though written by Gregg Allman five years earlier, Melissa was recorded by a formative ABB-associated act The 31st Of February before appearing on the Eat A Peach album by way of tribute to Duane after his death. Duane had always loved the song, so Gregg performed it at his funeral. However, Gregg had believed the song “too soft”, selling its publishing rights to producer Steve Alaimo and using the cash to buy a plane ticket. It was band manager Phil Walden who bought back the tune, with Dickey Betts adding its signature lead guitar solo. But, of course, Gregg’s plaintive, heart-felt lead vocal remains another priceless ingredient.

Allman And Woman – Love Me (From Two The Hard Way, 1977)
Gregg’s marriage to Cher was short and fiery. A mere three days after the ink dried on her divorce from Sonny Bono, 29-year-old Cher wed Allman, still 27 and in the grip of alcoholism. Just nine days later, on July 9, 1975, Cher filed to dissolve the marriage. Allman quit the bottle. The pair had a son, Elijah Blue, but the threat of Gregg falling off the wagon tore them apart for good in 1977. The pair’s duet album, Two The Hard Way, is largely unlistenable and flopped badly but has one or two choice moments, including this wild card selection. TTHW remains a fascinating document of a car crash relationship carried out in the full glare of the spotlight.

The Gregg Allman Band – I’m No Angel (From I’m No Angel, 1987)
In 1987, backed by a video shot in a bar full of cavorting, booze-swilling, gun-toting, sexy cowgirls, the title track of Allman’s fifth solo album revealed a flipside to the singer’s musical persona, spawning a surprise top 50 hit stateside. Gregg even grabs a cheeky snog from a cowgirl executioner before they hang him from a noose. Though glossier-sounding than most would have expected – this was the 1980s, after all – the song’s success had long term ramifications. Within two years The Allman Brothers Band would reunite. More recently, both Allman and the ABB have performed the song onstage, in more stripped-down form.

The Gregg Allman Band – Before The Bullets Fly (From Just Before The Bullets Fly, 1988)
Gregg didn’t write this one, that particular honour befell Warren Haynes, the guitarist of his solo band. The quality of the tune earmarked Haynes as a future Brother. He also, of course, formed the band Gov’t Mule. But enough about Warren, this story isn’t about him. Before The Bullets Fly is a neat, commercial tune sung with convincing blues-like gravel and just the right amount of wit, as he announces: ‘You know I hate to leave you, baby/But I just can’t take my time/You’ve got this jealous husband/And I’m far too young to die’. We hope his name wasn’t Ted Nugent.

The Allman Brothers Band – Soulshine (From Where It All Begins, 1994)
No, Warren Haynes isn’t paying us. But this Haynes-penned tune from the album Where It All Begins is a standout from an era of the group’s history that, riven by personnel problems and personal issues, many consider patchy (perhaps significantly, WIAB was also the final studio record to feature original guitarist Betts). Its unashamedly hippy-ish lyrics are expressed brilliantly by Gregg as the interplay between voice, guitar and keys simmers beautifully. Haynes would also record it with Gov’t Mule. The song became a staple of the ABB’s live set, not that UK fans would know… the last time the Brothers played here was in 1991.

Gregg Allman – Little By Little (From Low Country Blues, 2011)
Allman’s 2011 solo album Low Country Blues comprised mostly of other artist’s material, we’re talking about the likes of BB King, Muddy Waters, Skip James and Otis Rush. His souped-up interpretation of Little By Little, a blues number by Junior Wells was among its triumphs. Even at 63 he could still roar like a wounded bear – 11 trips to rehab, six marriages and a liver transplant will do that to man – and considering that the T Bone Burnett-helmed set was Allman’s first solo outing since 1997, we’d still have forgiven him. In the new issue of Classic Rock, Allman reveals that he and Burnett will record a set of all-originals later this year. It can’t come soon enough.