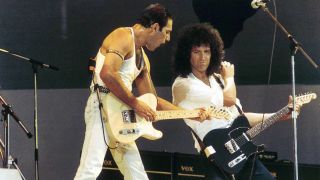 We asked one of our many resident Queen experts to pinpoint ten pivotal live moments from over four decades of performance.

Filmed for a promotional press kit after the release of their 1973 debut album, this is Queen taking baby steps. The sound of their future is all here though: silks, satins, elaborate feathercuts, cod-Zeppelin riffs, wannabe Beach Boys harmonies and a mad gospel breakdown at 4:20 mins.

Queen’s November ’74 performance of this standout track from the freshly minted Sheer Heart Attack album is a tribute to their frantic energy and musical telepathy. Sparks? Roxy Music? This is the real sound of brain-boggling 70s art-rock, dressed up in a Zandra Rhodes tunic and a satin catsuit – for your pleasure.

As an alternative to that overexposed UK Top Of The Pops appearance, try this Dutch TV turn recorded in November ’74 two days after Queen’s Rainbow Theatre show. Rarely have Queen looked – and sounded – as imperial as they do here: Mercury singing his dainty, Noel Coward-style ballad to Brian May’s one-man orchestra of chiming guitars, while wearing a single black leather glove.

From Queen’s Middle Earth period, this tale of mountain-dwelling giants was a mainstay of their mid-70s live show, including this Christmas ’75 performance. Contains the line “and the soup is cold on the table” delivered by a white jumpsuit-clad Freddie with unquestioning and hilarious conviction. Incidentally, the riff starting at 0:48 mins is Metallica’s entire career condensed into five seconds.

A forgotten gem from the rather wonky Jazz album, Let Me Entertain You is old ham Freddie promising to prostitute himself for his audience - whatever it takes, dear. His message is made all the more dramatic for being delivered here in head-to-toe black PVC. Listen out, too, for Mercury addressing the audience in their native tongue.

This is how you open a show. Queen make their big entrance to a soundtrack of ominous drones and seismic thunderclaps, before Brian May peels off that world-famous guitar riff, and Freddie Mercury orders his audience of ice hockey jersey-wearing Canadians to “Getup! Getup!” A big noise, indeed.

By 1982, Queen were in trouble, with new album, Hot Space, deemed ‘too disco’ for the patched denim and bullet-belt brigade. Live, though, they were unstoppable. This version of The Game-era track mashes dance rhythms with chopping metal guitar. And just look at John Deacon: like a photocopier engineer on dress-turquoise Friday, but still bringing the funk.

Back on top of the world after their Live Aid victory, Queen played on what was then the biggest stage ever built at the old Wembley Stadium. As this fantastic version of their peace-and-love-to-all-races anthem demonstrates, Queen absolutely owned every last inch of it.

We Will Rock You/We Are The Champions: Japan, 2014

The crown, the leopard skin catsuit, the sheer chutzpah of stepping into the shoes of the greatest frontman ever to prowl a stage… if anyone should be singing with Queen in the absence of Mercury, it deserves to showboating popinjay Adam Lambert.