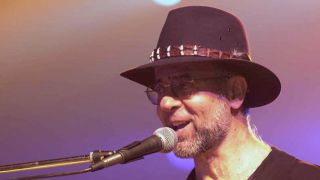 Blinded By The Light by Manfred Mann's Earth Band: The Story Behind Song

Manfred first heard Blinded By The Light on Springsteen’s debut album, Greetings From Asbury Park – or rather, he missed it.

“I made a list of three or four songs that I thought could make singles, and Blinded… was at the bottom,” he says. “Even when I got round to it I didn’t really see it.”

Manfred had bought the album on the recommendation of a Philadelphia radio DJ. He was one of a modest number of people to buy it – certainly not enough to trouble the chart compilers. Top of his potential singles list was Spirits In The Night, which he recorded in 1975, but which failed to make any impact. The following year he turned his attention to Blinded By The Light for Manfred Mann’s Earth Band’s The Roaring Silence album.

Blinded By The Light: The beginning

“The original version – which didn’t get on to the album – was very long and elaborate, quite different to what you hear now,” he says. “I spent ages fiddling with it, and eventually realised that if we cut out the stopping and starting at the end of every verse then we could get somewhere. I knew there was some magic in it, particularly at the end with the two voices singing the verse and chorus together.

“When we finally finished the album track I thought it had a great vibe, but the next question was how to get that into a single. The real problem was how to get from the chorus to the verse smoothly. The way we did it on the album wouldn’t work. I just couldn’t figure out a way to do it. And then – and this is why you need to be in a band – our drummer Chris Slade said: ‘Play Chopsticks over it’. We already had that elsewhere in the song, and I told him it wouldn’t work. But he kept insisting, and I kept saying no, until I suddenly realised that he wasn’t hearing Chopsticks itself, just the chords, which fitted perfectly. So we recorded those as backing vocals and added that to the original. This was in the days when you had to try and lock two tape machines in tandem, so that took another two days.”

Blinded By The Light: hitting the charts

In the UK Blinded By The Light got to No.6 in the autumn of 1976. reviving Manfred’s fortunes which had been in the [self-inflicted] doldrums after he’d disbanded the Manfred Mann pop group in favour of his wilfully uncommercial Chapter Three.

In America the single did even better, climbing slowly but surely to No.1 despite – or maybe because of – some controversy over the lyrics.

“Suddenly I had the American record label on the phone saying: ‘We can’t get radio stations in the southern bible belt to play the record because everyone thinks you’re singing about a vaginal douche’.”

It was another self-inflicted wound. Once Manfred had learned Springsteen’s original, he hadn’t listened to it. “I find that if you keep referring back you can get over-familiar with it and start to think it’s better than your lousy version,” he says with dry irony. But he hadn’t checked the lyrics, and somehow ‘Cut loose like a deuce’ became ‘Wrapped up like a deuce’. Worse still, that line sounded more like ‘Wrapped up like a douche.’ Manfred blames the azimuth on the tape machine [something to do with the angle of the tape head on the tape], and does a convincing Alan Partridge impression as he wraps his facial muscles around the words ‘deuce’, ‘douche’ and ‘dooce’ – which is what they finally managed to get it back to after more fiddling about with the tape.

Blinded By The Light: Life as a hit record

“The funny thing is that afterwards people came up to me and said: ‘You know why that record was such a hit, don’t you? Because everyone was trying to figure out if it was ‘deuce’ or ‘douche’,” he says.

Springsteen, who apparently didn’t see the funny side at the time – although he has mellowed since – backs up that theory. He told VH1’s Storytellers: “One version is about a car, the other is about a feminine hygiene product. Guess which the kids liked to shout more?”

So it may be just as well that Manfred never succeeded in his plan to have Springsteen sing one of the two vocal lines at the end of the song, combining the verse and the chorus.

“I didn’t want to go through managers or publishers, so I got the number of the hotel where he was on tour and I phoned up. It was mid-morning his time, but maybe he’d had a late night because I just got this really tired voice saying: ‘Uh huh?’. So I said: ‘Oh, are you a bit tired?’, and there’s no reply, just a grunt. So I said: ‘Okay, I’ll call back’. But I lost my bottle and I couldn’t phone again. It’s a shame, he’d have been great for it.”

Instead Manfred sang the part himself. It is allegedly the only time you can hear Manfred’s voice on a record.