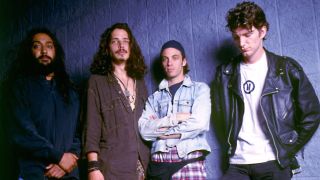 Soundgarden’s Badmotorfinger, released in October 1991, was where it first all came together for the band in the studio. It was their strongest and most consistent album. It also didn’t hurt that it came out right as grunge was really taking off, helped hugely by the recent releases of Pearl Jam’s Ten and Nirvana’s Nevermind (and, earlier, Alice In Chains’ Facelift). Additionally, Soundgarden landed some prime touring spots.

In the same week as the release of Badmotorfinger, Soundgarden played alongside Metallica as part of the mammoth Day On The Green Festival in Oakland, California. Two months later they played a string of arena dates opening for Guns N’ Roses, who were still in all of their out-of-control glory, followed by dates with Skid Row. “We were in the metal trenches at that point, just fully paying our dues. We were kind of ‘the opening act’ for ’91/’92,” Cameron says.

Despite coming from opposite ends of the spectrum to GN’R, Shepherd remembers the tour with them fondly: “We had a blast. The whole crew of theirs and their whole band are really fucking nice. And me, I’m a punk rocker fuck-up, and I’m all cantankerous – my nickname was Manimal back then, and we were called Frowngarden. We weren’t rock stars and shit, we’re not like that. I’m all grumpy – ‘Goddamn it, these guys are nice, I can’t even fucking hate ‘em! I hate their music, but they’re nice.’ Same thing with Skid Row – fucking hated their music, they knew it, but they’re all so fucking cool. Pissed me off, now I don’t even have a reason to be pissed off. What the hell is this? My life is going to shit and it’s beautiful at the same time.”

It was also around this time that rock photographer Ross Halfin began working with the band: “The thing about them – they were all actually quite quiet. They were very nice, but they were one of those bands that as soon as they started drinking… It got to a point where they ended up getting security in England. Ben was walking across Camden Town, there was a bunch of guys outside a pub, and he’s like, ‘Fuck you assholes,’ and they came over and whacked him. So security was needed because they would just go off when they drank.”

With such songs as Outshined and Rusty Cage getting significant airplay, Badmotorfinger served as Soundgarden’s commercial breakthrough. And as a reward, the group nabbed a spot on Lollapalooza II in the summer of 1992, alongside the Red Hot Chili Peppers and their pals Pearl Jam. “That was our payback for opening for all these weird heavy metal bands that we had nothing in common with,” laughs Cameron. “Once we got to Lollapalooza, we were back with our friends. That was a really fun tour.”

But it was also during this time that Shepherd began hitting the bottle heavily. “I would hang out with the Jesus & Mary Chain, I was the only guy that would talk to them – share my whisky with them or whatever. I started drinking too much on that first Guns N’ Roses tour. I would just get really depressed and that was the only way out, or so it seemed. A lot of touring is ‘hurry up and wait’ – you get there and then you wait. You’d see guys that had been out for a couple of years in a row – you hit this wall where it’s like: ‘Why go back? Why go home? There is no home, there’s nothing! Let’s just keep going, we’ll play another show.’ It gets really surreal.”

In 1991, two bands from Seattle were about to have their big breakthrough (Nirvana with Nevermind, Pearl Jam with Ten) and join Alice In Chains, the first so-called ‘grunge’ band to receive the first taste of success (with Man In The Box, from Facelift, that summer) in making Seattle best-known for something other than Boeing and Starbucks.

But many expected Soundgarden to be the first Seattle band to ‘bust through the door’, especially when their third full-length album, Badmotorfinger, was released on October 8 that year, along with the album’s lead-off single, Jesus Christ Pose.

The band had had difficulty finding a permanent bass player for a year or so, but when Ben Shepherd arrived, long-time members Chris Cornell [vocals/guitar], Kim Thayil [guitars], and Matt Cameron [drums] had struck gold and found one who was also a fine songwriter. Thayil recalls what the band were up to during the early part of 91. and how Shepherd helped kick-start Jesus Christ Pose.

“We were at the original Avast! Studios. It was run by Stuart Hallerman, who was our first sound man, and he used to record a lot of demos for us. They had a cement-floored recording room, and we’d go there and rehearse during the day, then at night we’d push our amps in the back and he’d have clients come in and record.”

It was during this early phase of feeling out the new material that they stumbled upon a soon-to-be Soundgarden classic.

“I think we were jamming, whacking that out on bass,” Thayil recalls. “That was definitely one of Ben’s riffs – the main riff. And then Matt started drumming on it. It was very quick.”

While Shepherd may have brought the basis of the idea for the song, input from both Thayil and Cornell put Jesus Christ Pose over the top.

“It was hard to discern exactly what the notes and the rhythm were from what Ben was playing, because it was very loud, blurry and quick. So while I was trying to figure out that groove, I came up with that weird ‘pterodactyl on crack’ guitar line. It was easier for me to hear that odd melody. That was my contribution. So we took that riff and recorded it. Chris took the tape home, listened to it and tried to learn the guitar part himself. And then he came up with the bridge and turnaround.”

And so all four members are credited for writing the music; Cornell wrote the lyrics.

With mainstream hard rock being at one of its silliest and most posey circa 91, in the song’s lyrics Cornell decided to point out how ridiculous the ‘Axls’ of the world often came across.

“I think [Cornell’s] reasons were he was – ironically – sick of celebrities and rock stars who had pulled that vulnerable, suffering sort of pose and/or attitude on their fan base. Specifically, there were a lot of rock guys that did that arms-outstretched kind of pose; that sort of victim that’s suffering for their fans and their art. It’s kind of annoying. Chris took a stab at it, on some levels mocked it, and the irony fell somewhere else, I guess [laughs].”

Interestingly, quite a few local Seattle bands felt that Cornell was a bit of a ‘posing rocker’ himself, including Mudhoney’s Mark Arm, who in the book Grunge Is Dead: The Oral History Of Seattle Rock Music recalls: “Chris’s antics got a little annoying. I’m all for somebody flailing around on stage and engaging the audience. But he would wear a tearaway shirt. It’s one thing to take off your shirt, but it’s another thing to pre-rip the seams. He’d grab the front of his shirt and pull it straight off in a forward motion. It was a pre-planned part of the act”.

The video to accompany Jesus Christ Pose featured some striking imagery, such as the band members walking through a desert; hanging upside down; weather vanes spinning; a Terminator-esque metal skull; and lots and lots of cross imagery – which landed Soundgarden in some hot water with MTV.

“I liked the video,” Thayil says, “but one thing that stood out was that we used a lot of provocative images of the cross. We had a few images of an upside-down cross, and of a burning cross. The reference of a burning cross had been used in lyrics that Hiro [Yamamoto, Soundgarden’s original bassist] had written in earlier songs.

“Generally we used a visual image or a burning cross. And MTV didn’t want to [play it]. They held back showing it in their regular prime-time rotation. And then shortly before, Madonna did that video for Like A Prayer with a burning cross! It’s a like a ‘dancer/actress’ can put a burning cross in her video, but a rock band – an integrated rock band, by the way – has a far briefer image of a burning cross and MTV worries about it. Well, that was the excuse they used. And we specifically wanted a woman of colour to be on the cross – we didn’t want a white guy to be on the cross. We ended up using a woman who I think was part East Indian, but you couldn’t really tell. It would have been better if she was more Indian or African-American. We wanted representation with minorities in our videos – and girls who weren’t dancing on the hood of a car. It was always an uphill battle for some reason.”

Eventually MTV did show the clip for Jesus Christ Pose, but only late at night and on Headbangers Ball in the US. And despite lack of airtime for the clip, parent album Badmotorfinger became Soundgarden’s big commercial breakthrough, thanks to a much more TV-friendly video for second single Outshined and some prime tour spots [including opening for Metallica and Guns N’ Roses, and a slot on Lollapalooza 92]. And from its release until the group split in 1997. Jesus Christ Pose either opened or closed many a Soundgarden show.

For Thayil it’s still a personal favourite. “I still love that song,” he says. “I’m pretty sick of hearing a lot of Soundgarden songs, but not Jesus Christ Pose.”