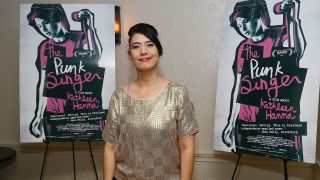 In the opening scene of new Kathleen Hanna documentary, The Punk Singer, the vocalist, riot grrrl co-founder, artist and activist is seen doing a 1991 spoken word performance, in which she repeatedly states: “I am your worst nightmare come to life, because I am not going to shut up”. True to her word, 23 years later, and Kathleen Hanna is still finding herself with a ton of stuff to shout about. It’s this unerring commitment to outspokenness that has made Hanna a polarising, and sometimes misrepresented, figure over the years. Here then, are six good reasons you should fall in love with Kathleen Hanna.

As front woman in Bikini Kill,** **Kathleen Hanna wasn’t just one of the most imposing female vocalists in music history, she was one of the best punk rock front people ever, rivalling Henry Rollins in the anger stakes and writing lyrics as timeless and impactful as Ian MacKaye. Bikini Kill embodied everything that has ever been great about punk – screaming about things that were previously unspeakable, expressing the frustrations of an entire community, politicising the personal, sticking to a fiercely independent ethos – and in the process, thanks to an unerring commitment to girl-specific issues, empowered and changed the lives of hundreds of thousands (possibly millions) of women, while co-inventing the riot grrrl movement.

Without Kathleen Hanna, Nirvana’s Smells like Teen Spirit would have had a different title

Kurt Cobain and Kathleen Hanna were the best of friends in the early ‘90s, after Kurt helped Kathleen escape an abusive relationship. The two drank a lot together and hung out frequently. One night, Kathleen – in a fit of booze-related madness – wrote on Kurt’s bedroom wall: “Kurt smells like teen spirit” (Teen Spirit was a deodorant marketed towards young girls at the time), thereby accidentally changing music history forever. At Lollapalooza in 1995, Hanna was thanked for her efforts by an unprovoked punch in the face from Courtney Love. (Not cool, Courtney…)

As the Riot Grrrl movement that she co-founded was finding its feet, Kathleen Hanna was largely responsible for setting the tone of the thing; orating from the stage and instructing the audience’s movement so that – for once – females could dominate the front of the crowd, while males were told to move to the back. “Girls to the front” became a rallying cry – one that a lot of the boys didn’t appreciate. As a result, Kathleen was verbally abused repeatedly, sent death threats by mail and eventually confessed to needing a row of women at the front of Bikini Kill shows, for her own protection. At no point did she give in to intimidation.

After Bikini Kill disbanded in 1997, Kathleen Hanna could not face another project where, in BK drummer Tobi Vail’s words “Every show was like a war”. Hanna moved, alongside new bandmates Johanna Fateman and JD Samson, in a less aggressive, more electronic direction. The result was socio-political protest music you could party to. Much dancing ensued.

Recognising the continued importance of riot grrrl, both from a music history perspective and also in terms of the incredible content it produced, Kathleen Hanna donated her collection of fanzines, artwork, letters and flyers, to New York University in 2010. It stands as a time-capsule of pre-internet community-building and activism, while reminding viewers that the issues that riot grrrls were writing about in 1992 – sexism, sexual abuse, rape, pressures on females to conform to ridiculous beauty standards – haven’t actually gone away. Revolution Girl Style Now remains a powerful concept in 2014.

What was initially a lo-fi, low-key solo project that Kathleen Hanna recorded in her bedroom in 1999, is now an entire band. Combining the electronic hooks of Le Tigre and the outspoken feminist sentiments of Bikini Kill, The Julie Ruin represents the perfect middle ground between Hanna’s two earlier projects, as is evidenced on excellent 2013 debut full-length, Run Fast. The quintet’s U.K. tour was due to take place this month, but has been put on hold due to Hanna’s ongoing struggle with late-stage Lyme disease. Do yourself a favour and don’t miss the rescheduled Julie Ruin dates in September – Hanna’s onstage charisma and humour is a thing to behold.