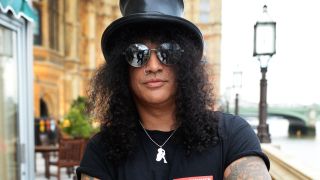 This is Six Pack, our mini compendium of the informative or the quirkier aspects of rock music. This week, it’s Slash’s turn to spill the beans on his storied career.

ON… HEROIN “I remember the first time I took heroin very clearly. We were over at a friend’s rehearsal studio and Izzy took me aside and said, ‘Check this out,’ so we went into the bathroom and did that whole thing. I thought, ‘Okay, I’ll give that a go’. I’ve never really had a lot of common sense. It wasn’t as though I was trying to impress anybody. It wasn’t peer pressure, really. I would just do things for the experience. I don’t think any other drug captivated me as much as heroin. I could always take or leave coke or drink – they were never a big deal – but smack just sucked me in. That was my drug. If I could go back, would I do it again? I don’t see the point in going back and changing anything. That’s just a waste of time. I might tell my 19-year-old self to give a little more forethought than I did though.”

**ON… BECOMING FAMOUS **“Some people get famous and all they want to do is go out and celebrate their fame by hanging out in bars where they’ll get recognised. I just didn’t have any of that going on. I became very reclusive, really. I found somewhere to live, got hooked up with a dealer and got strung out. From there, I developed this whole crazy, insular existence. It wasn’t even wake up: it was just shoot up. Every moment of my life was spent in the hunt for smack. I was either looking for it, getting it or using it. I don’t remember any actual sleep going on. It was pretty dark. I got into speedballs and I would walk around the house with guns, hallucinating. I fired them a few times. Also, I had about 80 snakes in the house. I was just in a dark place. I was completely by myself; I didn’t really involve anyone else. The only time I left the house was to go cop smack and that tended to be in the wee hours of the morning. Then I’d go back to my little hole to hang out.”

ON… AXL
“My relationship with Axl was always testy but interesting. The thing with Axl is that he’s creatively explosive. The problem, though, is that means his personal life has its difficulties. What you hear in his voice, and what you read in his lyrics, is honest to the fucking bone. As extreme as that is, that’s also how his life is. I’m different: when I’m playing, I’m pretty hardcore; when I’m not playing, I’m pretty laid back. I express myself with the guitar and that’s the only time I really have anything to say. But Axl is Axl 100% of the time. He’s always that extreme. But we managed to make things happen. Izzy was very important because he and Axl had a long history. Basically, it worked like this: I was close to Izzy and Izzy was close to Axl, therefore I could deal with Axl through Izzy.”

ON… DEBAUCHERY
Was the story about Izzy Stradlin [Guns N’Roses guitarist] having sex with the same girl as me and him accidentally coming all over my leg true? Yeah, that happened. When things took off in Guns it was definitely fun. I guess it was sort of sleazy in that respect and it went on 24⁄7, so it was definitely pretty enjoyable. I certainly have no regrets. I couldn’t have asked for my late-teens to have been any better. I’m immensely proud of it. But, although we thought it was a gas, everyone around us just thought we were crazy. But I’ve heard some pretty wild stories about Motörhead, AC/DC, Aerosmith and Led Zeppelin too. They all did the same shit as us; I don’t know why we got the reputation! Maybe it was because we did it unabashedly out in the open. We didn’t know it was shocking. Perhaps we were just too fucking frank.”

ON… TRYING TO GET CLEAN
“I had a big scare in Arizona once. I had gone to a nice golf resort there to get clean. The only problem was that I took all my drugs with me. I ran out of smack so I kept shooting the coke instead. Then, all of a sudden, I started hallucinating that all these little guys were after me, they seemed very real and they were pretty savage. I went to have a shower to try to get them to leave me alone but I accidentally smashed the glass in the shower door. I cut myself pretty badly, then I battled my way out of the room. the next thing you know I was running across a golf course, with no clothes on, and I had no idea where I was. Eventually I got into the lobby of the hotel where they called the police. I was still delirious when the cops arrived and I told them all that these little guys were chasing me. They even wrote it all down in their report! Then they took me back to my room with looks on their faces like, ‘Okay, this guy is going to jail’. Somehow, my manager got hold of the local promoter who put me on a plane – minus one shoe, because I had cut my foot open – back to LA.”

ON… DYING
“The night I died was actually a bad ending to a wonderful evening. It was sort of funny. I had gotten into a massive argument with my fiancée and I thought, ‘Fuck it, I’m in Frisco,’ which is smack heaven, ‘I’m going to get loaded’. So I did but I used a little too much. It was fun for a while, then I passed out in the hotel hallway for eight minutes. They told me later that I died. I came round in the hospital and checked myself out because we had a show the next night. I overdosed the morning after one gig and then died – so I guess that counts as a day off – then got up and played the next night. I’m pretty durable like that, it didn’t phase me. I guess that puts Axl not getting up onstage into perspective.”

The Best Of Slash