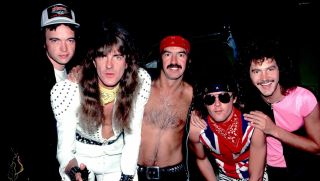 Forty years on, 1977 will always be remembered as the defining moment for punk rock. But it was also in that year that one of Britain’s greatest heavy metal bands was born. From Yorkshire, and working-class heroes to a man, Saxon rose out of the New Wave Of British Heavy Metal at the turn of the 80s alongside Iron Maiden and Def Leppard. And while Saxon would never attain global superstardom as Maiden and Leppard did, theirs is a mighty legacy that sustains them to the present day. As singer Biff Byford proudly declares: “We’re one of the quintessential English heavy metal bands.”

Originally named Son Of A Bitch, the renamed Saxon made their initial breakthrough in 1980. In this, the year of Back In Black, Heaven And Hell, Ace Of Spades and so many other all-time great hard rock and heavy metal albums, Saxon delivered not one but two genre-defining classics: Wheels Of Steel and Strong Arm Of The Law.

The band’s popularity remained high until the mid-80s, when an attempt to refine their sound for the American market alienated diehard fans and coincided with the departure of totemic bassist Steve ‘Dobby’ Dawson, whose extravagant moustache and on-stage finger-pointing antics were the inspiration for the character of Derek Smalls, played by Harry Shearer, in This Is Spinal Tap. But in the early 90s they turned the ship around. A series of heavier albums restored Saxon’s credibility and fan base. And although another founding member, guitarist Graham Oliver, left in 1994, Byford has led the band throughout its 40 years, with his trusty lieutenant, guitarist Paul Quinn, at his side.

In the current line-up of Saxon, a shared history runs deep. Drummer Nigel Glockler has been with the band, on and off, since 1981; bassist Nibbs Carter has been a permanent fixture since 1989; even the ‘new boy’, guitarist Doug Scarratt, is now a Saxon veteran of more than 20 years.

In the band’s long career there have been 21 studio albums and 10 live sets. Byford admits that “there was a period when we lost our edge”. But as proven on latter-day albums such as Lionheart and, most recently, Battering Ram, this veteran band still deliver on Byford’s mission statement from 1981: to “fill your heads with heavy metal thunder”.

Saxon’s most famous album is simply one of the greatest heavy metal records of all time. In headbanging anthems such as Motorcycle Man, the hit single 747 (Strangers In The Night) and the gargantuan title track, Wheels Of Steel captured the essence of the band and the spirit of the NWOBHM.

It was also the making of the band. After their self-titled debut had flopped, Wheels Of Steel blasted into the UK Top 5, a victory made all the sweeter by the uncompromising nature of the music. As Byford said: “It’s a really fucking heavy album.” And at the time, it blew the mind of a 16-year-old kid named Lars Ulrich.View Deal

With astonishing speed, Strong Arm Of The Law arrived just four months after Wheels Of Steel. “Amazingly,” Byford said, “they both sold 250,000.”

Like its predecessor, Strong Arm Of The Law was full of anthems, including the manic Heavy Metal Thunder and a title track that mocked a failed police drug bust on the band. Ending the album on a darker note, Dallas 1 PM recounted the 1963 assassination of US President John F Kennedy. Significantly, the track features the sound of three gunshots. As Byford noted: “We went down the conspiracy theory route.”View Deal

Superior - the ones that helped cement their reputation

Completing the holy trinity of landmark Saxon albums from the band’s golden era, Denim And Leather is at its heart a celebration of heavy metal culture and the unity between the band and their audience.

The title track begins with lines on the NWOBHM and ends with the chorus swelled by Saxon’s Militia Guard fan club. And The Bands Played On glorifies the first Monsters Of Rock festival, in 1980, at which Saxon starred. Other key tracks include Princess Of The Night and Never Surrender.

Denim And Leather remains a monument to the old school.View Deal

Of Saxon’s 10 live albums, their first is still the best. Recorded on the Denim And Leather tour in ’81 and ’82, The Eagle Has Landed is the sound of a band at their peak and preaching to the converted – the stuff all great live albums are made of.

Although drummer Pete Gill was gone, his replacement Nigel Glockler matched him for power. The band were like a juggernaut, rolling through all the big songs, Wheels Of Steel the biggest and heaviest of all. And the star of the show was Biff, singing his balls off and bantering with the crowd as a genuine man of the people.View Deal

On the band’s fifth album, loftier ambitions were revealed. Loud and proud heavy metal remained the default setting, but Power & The Glory was more polished than previous Saxon records.

Two epic tracks gave the album its weight: Power And The Glory is a thunderous battle cry, The Eagle Has Landed slow and atmospheric. Rather less impressive were This Town Rocks, a work of utter stupidity, and Nightmare, a drift towards Americanised rock and a portent of the disaster that came two years later.View Deal

On this, the best of Saxon’s late-period albums, they found a perfect balance between the old and the new. In the title and cover image of Lionheart were echoes of 1984’s Crusader; in the music, shades of vintage Saxon mixed with modern European power metal.

Saxon brought in a new drummer, Jörg Michael, for Lionheart, and his prowess was evident from the start, in the bludgeoning attack of Witchfinder General, the heaviest of this album’s many heavy songs. But the crowning glory of Lionheart is its title track, the sequel to Crusader and a true Saxon classic.View Deal

Released in ’79, ahead of the NWOBHM’s chasing pack, Saxon’s debut album was a hit-and-miss affair and failed to chart. Its tinny production didn’t help, and nor did the band’s somewhat muddled creative vision, as illustrated by the ponderous, prog-influenced opening one-two of Rainbow Theme and Frozen Rainbow.

The real Saxon was in two terrifically rowdy numbers – Stallions Of The Highway, the first of their many hell-for-leather biker anthems, and Backs To The Wall, which had Biff sticking it to The Man. In these tracks were the signs of what was to come.View Deal

It was with the Crusader album that Saxon’s glory years ended. It sold a reported two million copies worldwide, and after it the band’s career went into a steep decline.

The material on Crusader ranged from the brilliant to the banal. The title track is among Saxon’s greatest epics, as grandiose as the cover art it inspired. And in a completely different mood, there’s a boisterous version of Sweet’s Set Me Free, one of the glam rockers’ meatiest numbers. But in knucklehead songs such as Rock City, there was a whiff of self-parody. Coincidentally, This Is Spinal Tap was also released in ’84.View Deal

Since the early 90s, Saxon have made a series of fine albums. The significance of Unleash The Beast is that it was Saxon’s first studio album with guitarist Doug Scarratt, following the departure of Graham Oliver, and also the first album with what is now Saxon’s current line-up.

From the off, Scarratt and Paul Quinn sounded great together. Scarratt also co-wrote every track on the album. And in the best of them – The Preacher, a dark meditation on faith and fear, and The Thin Red Line, another historical battle epic – was the power and glory of old.View Deal

This was the moment when it all turned to shit for Saxon. Newly signed to major label EMI, the band attempted to ‘do a Def Leppard’ with the glossy Innocence Is No Excuse. But this was no Pyromania. It was a lame duck full of songs as clichéd as their titles suggested: Rockin’ Again, Back On The Streets, Rock ’N’ Roll Gypsy. As Biff admitted to Classic Rock: “We got lazy and lost focus.”

They continued in this vein on 1986’s Rock The Nations and 1989’s Destiny. It was only with Solid Ball Of Rock in 1990 that Saxon rediscovered their mojo – and their balls.View Deal

The Story Behind: Saxon - Wheels Of Steel