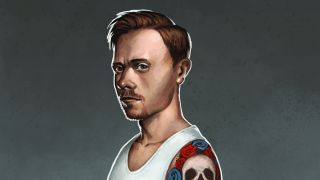 CHINO MORENO IS THE BOMB. IT'S THAT SIMPLE

DEFTONES HAVE NEVER DIPPED IN FORM

“Their career has longevity. They’re not fucking around and they never have. It’s crazy to be this far into their career and to have released nothing but consistently brilliant albums. They had to cope with what happened to Chi [bassist Chi Cheng, who died in April 2013] and they’ve still come through it with a 100% artistic record. You can put all their albums on shuffle and it’s always going to land on something good and different. Adrenaline came out in 1995 and I can still put that on and not feel like I’m stepping into a time warp.”

WHITE PONY** IS A CLASSIC**

“Where do you even start with that album? White Pony came out in 2000 which is already ridiculous, but it came out as I was starting to learn drums and thinking about becoming a musician, and that album was the bar for me. It still sounds better than any album I’ve ever heard. The production is ridiculous. The sound of the drums on that album still gets me; Chino was making noises that nobody had ever heard and the sounds he was making would pan left and right… it’s just total genius.”

“When people have tried pigeonholing them, they’ve always broken out of the box. We’ve suffered from similar things when you go on tours and either you don’t throw the horns enough for metal tours but you’re too metal or technical or whatever for the hardcore scene and it pushes you to say, ‘We’ll do our own thing’, and that’s an influence from Deftones. They never had to belong to anything because they were always strong enough on their own two feet.”

“They were one of the only bands that grew up during that time period and survived it. The more cartoony some of the nu metal got, the better Deftones looked for staying true. Nu metal fans always understood that there was more to Deftones. There were some great bands from nu metal but Deftones [Chino Moreno pictured blow in 1998] always stood apart. Even today, they aren’t put in with a band like Limp Bizkit. They’ve always stood apart from nu metal, emo or post-hardcore or whatever scene was going on. It was never about belonging for them – it’s just about being Deftones.”

“I don’t know a band around that doesn’t like or respect Deftones. I can’t think of anyone I even know that doesn’t like them. We played one festival show with them in Italy and I always like to stay humble and never put things on social media, but I put up a picture of the poster of us playing with Deftones on Facebook and I’ve never had so many likes. It just seems wherever you go, whoever you talk to that likes rock music, everyone likes or at the very least respects Deftones and that’s all anyone could ever ask for if you play in a band.”