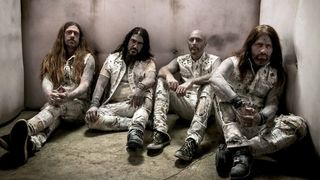 Machine Head’s ninth album Catharsis is almost upon us! It hits shelves on January 26, and has already been dividing opinions amongst metal fans. The band have already released videos for the title track, Kaleidoscope, Bastards and others, but what do the songs actually mean? We sat down with frontman and Machine Head mastermind Robb Flynn to talk through each of the 15 tracks.

“It’s an angry, brutal song. We’ve had long intros on the last five or six albums, so it was time to start with something direct and violent.”

“This is a special song. The lyrics say it all: ‘The only thing keeping me sane, the music in my veins / If these words are my fists, this is my catharsis.’ That crystallised everything we were trying to say.”

“It’s a straight-ahead Machine Head song, about embracing being outsiders and misfits. ‘I found my heroes / The freaks and zeros!’ That sums it up.”

“This is a dumb song full of ignorant shit, ha ha! It’s about my love/hate relationship with California. It’s a balls-out, rockin’ song, I think.”

“I’m just gonna say, ‘This is a nu metal song’ ha ha! It came together super-quick. You’re basically hearing the first time that we ever played that song and the first time I ever sung it.”

“Again, it’s about the power of music. I’m not a religious guy, but music is as close as I get. The line, ‘Songs fill what religion won’t’ says it all.”

“Bastards is a straight-up folk song. I would relate it to Springsteen and Tom Petty, but it’s still Machine Head. It’s probably the most important song on here.”

“I tried to use very straightforward language on this album, but I still threw a ‘begets’ in there, ha ha! This is another out-and-out Machine Head rager.”

Screaming At The Sun

“This is one of the first songs we wrote for the album. It’s pretty straight-ahead, but we went into some very weird places after writing this one.”

“It’s all clean vocals. It’s all acoustic. It’s essentially unplugged. We’ve explored a lot of melody and harmonies on this record.”

“It’s an epic and it’s about Louis XI, the Spider King of France. I’m a history buff and it’s just a great fuckin’ story. He’d weave these elaborate webs of deceit!”

“This one’s gnarly. It’s ugly and pissed off. I guess we could try to write more hits for the radio, but that’s just not how I write, you know?”

“The phrase ‘stand your ground’ from Bastards appears in a few songs, including this one. Another classic MH rager.”

“This one turned into a tribute to Lemmy. I just started writing lyrics and all this crazy, debauched shit just came out. It’s totally Motörhead.”

“It’s a pretty dark end to the record, but the lyrics to Bastards pop up again. Late on, I realised that the songs have the same chords. That was kinda weird.”

Catharsis is out on January 26 via Nuclear Blast, and is available to pre-order now.

You can read our exclusive interview with Robb Flynn in Metal Hammer issue 304. Buy it directly here or become a TeamRock+ member to read it right now.

Machine Head: "People just like calling me a dick"