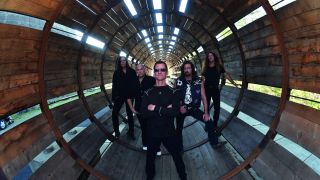 YOU’RE BACK WITH MIKE HOWE BEHIND THE MIC. HOW’S THAT WORKING OUT?

Kurdt Vanderhoof [guitar]: “It feels like it’s 1983 again. Everything’s taking off and we’re hanging on for the ride. I’m so grateful because I had no idea I’d still be able to do this at my age. Mike’s really having a blast, we’re all loving it because the band feels different now. How lucky can we get? We bring our old singer back and he sounds better than ever!”

HOW HAS TOURING LIFE CHANGED OVER THE LAST 30 YEARS?

“We’re just grateful we even have a bus this time around. We’ve not had one for the last 15 years so it’s bringing back memories. There certainly aren’t any drinking games anymore, those days are gone.”

WHAT CAN DIEHARD FANS EXPECT FROM YOUR SETLIST THIS TIME?

“We decided when Mike came back that we’d concentrate on the Mike era and the new album, which is nice for us because we’ve been chasing the thrash era for the last few years. We even have In Mourning from The Human Factor in the set now which I absolutely love playing.”

WHAT IS YOUR MOST CHERISHED MOMENT FROM ALL THOSE YEARS ON THE ROAD?

“When we joined Metallica on the Damage Inc. tour in ’86. It felt like we were a part of a movement, right at the forefront of a change for the community and it was us against the world. We were in our 20s and we were pretty much immortal.”

DO YOU EXPECT TO KEEP DOING THIS FOR MANY YEARS TO COME?

“If we don’t drink too much and still have a bus, and as long as I go to a chiropractor and stay healthy, we’ll keep doing it. There’s lots of music I want to make and now the music industry’s changing, there’s nobody telling me I can’t. Life is really good now.”