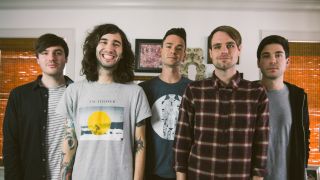 With the release of their second album, The Home Inside My Head, Illinois quintet Real Friends are fast becoming ones to watch in the new wave of pop-punk. “I’m 27, but I still feel like I’m 20. Weird things are happening – I’m seeing a lot of people in my life get married and have kids, and it’s weird because I don’t feel that way,” says bassist Kyle Fasel. “A lot of the album has to do with growing older and the things that run through your mind; it’s about self-reflection. It’s the wide frame of growing up and growing old.”

This all sounds a bit emo to us, which got us thinking – which bands from the emo scene helped shape Real Friends’ sound? We challenged Fasel to pick the definitive 10…

Jimmy Eat World
“They were the first band I ever listened to that was considered emo, and the first time I ever heard the word emo. Little did I know that that genre of music and that whole lifestyle would influence my life as much as it has”

Dashboard Confessional
“This band really introduced me to acoustic music. When Dashboard first came out it was all acoustic. I really love it still today; sometimes I prefer it over a full band. Maybe I’m getting old, but I like it chilled out. It also showed me that a band with the emo tag could also be mainstream.”

The Starting Line
“That was my first pop-punk concert. My dad drove me and all my friends in a van to the city of Chicago, because I’m from the suburbs, so we drove all the way to the city, waited in line, and my dad went with us. It was a big experience seeing a band I idolised. I was like, ‘Wow, this is amazing!’ I went to local shows a lot, but that was the first time I felt the whole live experience on a higher level.”

Taking Back Sunday
“They were a huge influence on my youth. They were the first band in this style that I ever saw play on a late night TV show; they played on Jimmy Kimmel’s show and that was really cool for me. It made me sit up a little straighter and say, ‘I’m proud to be the way I am’. A lot of people think you’re selling out [by going on mainstream TV], but I thought it was a proud moment. I had the whole deal - tight girls’ pants, white belt, and I was proud.”

The Early November
“This was the band that played first at The Starting Line show I went to. I didn’t really know them that well, but it started a chain reaction for me that I would go to shows all the time – my dad probably hated it because he had to take me – and I’d learn about the bands there, the openers. I’d go back and really discover them after the show; I’d research them online and go to their websites and look up when they got together. There was no social media, you couldn’t go and post a status about how much you love them, so I’d do a lot of research. I’ve never really said that out loud, but it’s just made me realise how different it was back then. You had to go to their website, and look at live pictures before YouTube was a thing.”

Saves The Day
“This is a band I never listened to when I was younger, but it’s the perfect example of a band I got into later but I wish I got into them earlier. They’re a huge influence on our music now, but I didn’t start listening to them ‘til I was about 21. It’s kinda weird because it feels like I’ve listened to them as long as I’ve listened to Jimmy Eat World. I heard the name but never got into them. They really stick out to me as, ‘Man, I’m so late on this!’”

American Football
“Their self-titled album is my favourite album of all time. It’s really chilled out, and showed me a whole mellow side of music. When I first heard it I must have been about 15, and it showed me that everything didn’t have to be loud all the time. It showed me the more artistic and dynamic side of music.”

The Promise Ring
“They’re an earlier 90s emo band, and one of the first bands I heard [from that era]. There was them, Sunny Day Real Estate, Texas Is The Reason… they’re all from the first generation of emo bands, and they introduced me to a lot of other bands.”

Thursday
“Thursday are the reason I started playing. I sang in my first band, and it was awful! So bad. I tried to imitate the singer of Thursday. I was 13 years old, in a basement with a microphone, and I thought I was so cool. But without that, I feel like I might not have done this. They introduced me to songwriting – intro, verse, chorus – because I’d never thought about it before.”

Spitalfield
“They were around when I was in high school. They were a smaller band on Victory Records, and showed me that a band from Chicago could get signed, go out and tour, and be a real band. Not on a massive level, they were quite underground, but they did it well.”

For more information on Real Friends, visit their Facebook page.