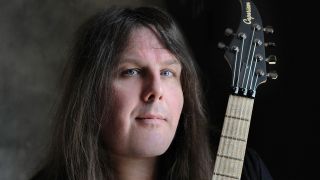 Formed 22 years ago in Middletown, New Jersey, Symphony X have made slow but steady progress over the course of nine albums. Fronted by one of the finest singers around, Russell Allen, and powered by guitarist Michael Romeo’s techno-flash, their neo-classical progressive hard rock has caused them to be feted as heirs to the throne once filled by Ronnie James Dio-era Black Sabbath. Prog met Romeo before a sold-out show at Islington Assembly Hall, the band’s biggest headline gig in London so far.

With its recurring references to the number three – the title track has three syllables, a three-note melodic phrase, and its verses contain three references to three songs from Symphony X’s third album, The Divine Wings Of Tragedy – your current album, Underworld, will keep prog nerds happy.
That’s true. Quite early on we knew it would be about Dante’s Inferno and Orpheus In The Underworld. The number three took on a life of its own. I love those records that allow you to dig beneath the surface and find something cool.

How do you feel about Symphony X being described as progressive?
I don’t really mind, but we do a lot of other things. We have big, heavy moments and nice, melodic catchy parts but there are long, complex elements that I guess are comparable to Yes, Rush or ELP.

Many Prog readers are contemptuous of prog metal, the accusers suggesting that it is really just trad metal with keyboards bolted on.
[Nodding enthusiastically] And you know what? I kind of agree with that. But that’s not Symphony X. We’ve always had a keyboard player and we do whatever we feel like at the time. We’ll make a record and some fans’ll say: ‘Oh man, where’s the melodic element gone?’ But being progressive is always changing it up, man. Why keep on bashing out the same old shit?

If someone sought Symphony X at their proggiest, which record should they pick up?
V: The New Mythology Suite [2000] was a big concept piece, or maybe The Odyssey [2002], which had a 25-minute title track.

Rush were the first prog band that you fell in love with via the album Permanent Waves, followed by Kansas, UK and ELP.
When I became a guitar player, Uli Jon Roth [Scorpions] and Randy Rhoads with Ozzy Osbourne made big impressions upon me. But after a while you start looking for something else, which led me to Rush. I remember a conversation with Mike [Pinella, Symphony X keyboardist] about the band UK, and discovering Allan Holdsworth and after that my life was never the same [laughs].

Being progressive is always changing it up, man. Why keep on bashing out the same old shit?

Where does the band’s classical influence come from?
As I kid I loved the Star Wars soundtracks. But later on I got into the musicality of music, if you know what I mean. Frank Zappa was a big part of that.

Do you follow the prog genre closely, maybe attend shows?
Not really. If I’m in the mood for a prog fix I’ll play Danger Money [UK] or ELP’s Tarkus, maybe some early Kansas. I don’t go to a bunch of shows or follow many other bands.

Could the backlash against prog metal be a temporary thing?
I guess so, but it depends on the definition. Would your readers consider Meshuggah [Swedish extreme metallers] to be prog? Is it just about time signatures, or the length of a particular song? Is it to do with polyrhythms? Symphony X walks that line, but we do our own thing, man.

These are certainly great times for progressive metal. Dream Theater have just attempted the biggest thing they’ll ever undertake. Have you heard their new album The Astonishing?
Just a little bit of it. The album’s two hours and 10 minutes long, spread over two discs, right? That’s a lot to take in, man. And they’re playing it in its entirety. I’m sure at some point when we get back home [after the tour] I’ll dig in and get a copy.

How does the idea of trying to match those levels of extravagance with Symphony X appeal?
Well, as long as the songs are good. Shit… it’s hard to write one album – 60 minutes of quality material. Sure, we could do something like that but would all of it be solid? And people can only digest so much.

Let’s not forget that Iron Maiden’s current album The Book Of Souls also has an 18-minute epic, Empire Of The Clouds.
I haven’t heard that either [laughs]. I’m so busy with my own band, I can’t do shit. And the truth is that when we’re writing we try not to be influenced by outside stuff. If you’re listening to the latest Muse record, for example, it’s so easy for that to happen.

So let’s imagine you’re in the dock representing the prog metal genre against the prog purists that hate it?
[Ponderously] From a musician standpoint it’s easy because we’re always looking for something that’s a little more extravagant than the norm.

But what is the very essence that can make prog metal so inspiring?
The bottom line is that it has to be interesting… a little more adventurous than usual. Though there were personnel changes, old Yes circa Tales From Topographic Oceans [1973] was the same band that came out with the more contemporary-sounding Big Generator [1987]. So it must be interesting and it needs melodic content, but the bottom line is the songs. Rush were great players, but what made albums like Moving Pictures true pieces of art were their songs. Without them, what’s the point?