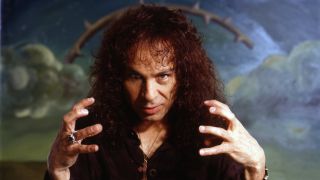 The veteran singer began his career way back in 1962 with school band Ronnie & The Prophets, but he’s best known for flashing his distinctive ‘maloik’ hand signal on stage with bands such as Elf, Rainbow and Black Sabbath... plus of course his own group, Dio.

Your new live album comes from a show you played at the end of 2002.

It was a gig at the Roseland Ballroom in New York. The live CD is basically the soundtrack to the Evil Or Divine DVD that we put out recently. We’re really pleased with the sound. It was digitally done, so we didn’t need to mess with it for the audio CD.

The live album features two musicians who aren’t in Dio anymore: bassist Jimmy Bain, who also played with you in Rainbow, and guitarist Doug Alrich, who is now with Whitesnake.

That’s right – I’ve got Rudy Sarzo on bass now, and Craig Goldy is back on guitar. I haven’t heard from Jimmy since he left the band, which is a shame because we worked together for so many years. But I do read what my ex-members say about me in the press – they’re always calling me a twat. It’s happened so many times now, I’ve got immune to it.

Given your epic career, how do you go about choosing the tracks that make up a Dio set list?

There are songs that you just have to do: Holy Diver, Heaven & Hell, Rainbow In The Dark, a couple of songs from Rainbow… I tend to mix them up with some of the newer numbers, to make them sound slightly different. There are rules that you have to follow and, as I say, some songs you simply cannot afford to leave out. In general, I try to choose the tracks that I hope will get the best audience reaction.

At the turn of the 90s and with the advent of grunge, Dio songs sounded terminally dated. But now, somehow, they have taken on a timeless quality.

A lot of that has to do with the quality of the compositions. A good song will last forever.

Have you seen the TV advertisement for Oxo that features a Ronnie James Dio rock-singer lookalike? It’s hilarious when the guy leers at the camera and screams out the words: ‘SHEPHERD’S P-I-EEE!’

One of my friends who lives in England phoned me up and said: “I’ve just seen this bleeding Oxo commercial and the fucking guy on it looks like you.” But honestly, it’s not me on there [the band in the ad is a tribute act called Rainbow Rising; the vocal soundtrack was supplied by Bernie Shaw of Uriah Heep fame]. But I don’t mind. It sounds like a good way to take it down a peg or two. It’s great; it kills me.

Guitarist Ritchie Blackmore, who you played with in Rainbow, was a renowned practical joker. Is that where you get your sense of humour?

No, I was always that way myself. I recall when I was around Ritchie and he used to pull his shenanigans… it was cool, I used to do it back to him. That’s what cements a relationship, the fact that the prankster can be on the receiving end as well. There’s a lot more respect that way. It’s certainly much better than shrugging your shoulders and saying: “Oh, well it’s Ritchie, I suppose I better let him burn my house down again.”

When was the last time you saw Blackmore?

The last time was in 1987. We did two festival shows in Germany: it was Dio and Deep Purple. Ritchie kept himself to himself, he had his own little soccer pitch or something, and I never spoke to him. That was the last time I physically saw him. The last time I spoke to him would have been about 1983. Sheesh… that’s one hell of a long time ago.

Now Ritchie’s doing his medieval thing, of course. He’s very close-mouthed and he doesn’t really want to talk about anything – least of all about himself, and how he feels. I know he has some very strong feelings about what went on in his past, but I always thought you shouldn’t let that turn into this hate thing, where you can’t bear to be in the same room as someone else anymore. Having said that, the man’s a genius. Maybe that forgives all his sins.

Your 2004 studio album, Master Of The Moon, received great reviews. Did this surprise you?

I thought the album was played well, and the sound was the heaviest production that we’ve done in Dio. I was very proud of the product and I was not so surprised when it was well accepted . Once again, quality always comes out in the end.

We’ve got a one-off show coming up in Puerto Rico soon, and we’re going to be doing a lot of touring in Europe this year. In the summertime we plan to do a lot of festivals. We’re also going to do a month in Russia, which I’ve been told by the guys in Deep Purple might seem like 100 years. You’re talking about the difference between playing in big cities such as St Petersberg or Moscow, to playing 17 or 18 other dates in other parts of that massive country. But I’m sure it’ll be fine. All you can do is bitch and moan for a long time, and then you’ll be OK.

In the A To Z Of Dio article we published in Classic Rock No.73, you confounded our reporter by revealing the real moniker of your mechanised dragon stage-prop. You said: “His name was actually Dean. The English called him Denzil. I have no idea why.” But we understand that another ‘Dio creature’ exists, called Murray?

Murray is more or less the logo figure that we have. He’s on the sleeve to the Holy Diver album; he’s the monster-looking guy who’s drowning the priest. Murray is also on the sleeve to The Last In Line. But what else are you going to call these guys? If you’re so into that kind of silliness, then you can name them Zagradoth or something. That’s fucking stupid. What’s funny is when a monster has got a name like Murray. And Dean the Dragon. It’s not like some horrible title that we’ve come up with. Iron Maiden have got Eddie, after all. And Black Sabbath’s flying devil… his name was Henry.

I don’t suppose you remember the last time we both met – at a Pink Pop festival in Holland, some time in the mid-80s?

You’re probably completely bald by now [laughs]. Back in my Rainbow days, in one of the metal mags you used to write for, I got voted as one of the leading people in rock who was destined to go bald. And I fooled you all. Alright, I’ve got a lot less hair than I had before… but I’ve still got some. Ha-ha! I fucking fooled you bastards, didn’t I?

“The biggest conflict in my career,” says Dio, “was when Ritchie Blackmore asked me to form Rainbow with him, because he was going to leave Deep Purple. That would have meant me leaving my buddies in Elf by the wayside. It was a terrible dilemma. The Elf guys had been my friends since I was a little kid. So I resolved it by saying: ‘I’ll do it if you take my people to play on the first Rainbow album’. Luckily, Ritchie agreed to that [all of Elf that is, apart from guitarist Steve Edwards, for obvious reasons].”

Elf Albums To Check Out

Elf
Released in 1972, this was the band’s debut, and produced by Deep Purple duo Ian Paice and Roger Glover. Ronnie Dio is credited under his real name of Ronnie Padovana, while Dave ‘Rock’ Feinstein, his cousin, is on guitar. You sense the emergence of something spectacular.

Carolina Country Ball
The band’s second album, from 1974, was produced by Glover, and has the line-up in place that would eventually team up with Blackmore as the first Rainbow incarnation. You can hear the Purple influence rising.

Trying To Burn The Sun
The third, and final, Elf album was released in 1975 and again produced by Glover. Still bluesy in its foundation, it’s the band’s most coherent record, and the one that points towards a brighter future which would never happen.