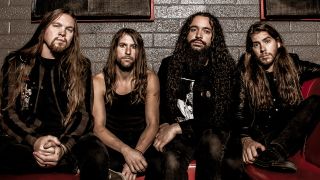 In this exclusive OneLouder podcast, we sat down for a lengthy chat with one of the most interesting and articulate individuals in modern metal: Havok frontman David Sanchez.

Havok have been one of the finest and most consistent thrash bands of recent years, and, with the band's stunning new album V having recently being released on Century Media Records, we deep dive into how the new record was conceived, speak about some of the more unusual lyrical inspirations that made it onto the record, the power of the riff and music's ability to be able to make genuine societal change.

David also gives his thoughts on the recent Covid19 pandemic, and how that has affected him personally and Havok's touring plans.

If you're a fan of thrash metal, this is a conversation you’ll want to check out, after you’ve listened to Havok’s new album V, out now on Century Media Records.