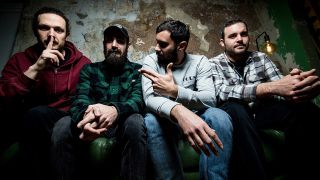 Back home, their music has been lapped up by thousands in packed arenas. They’ve played everywhere from Europe and the UK to the USA and Australia. Their new album, the just-released Youth Of Dissent, was produced by a Seattle grunge stalwart (Matt Bayles, whose CV includes work with Soundgarden, Deftones, Pearl Jam etc) and looks set to turn even more heads.

If you don’t already know the name 1000mods, Youth Of Dissent will change that.

And if Greece isn’t already on your rock map, it should be. Having birthed the likes of Rotting Christ, Septicflesh and Firewind, as a country it’s no stranger to heavy music. In the last decade it’s become even more of a hotbed for rock talent, and right now 1000mods are the ones to beat.

Having swapped their small hometown for Athens’ white-hot rock scene, the band aren’t afraid to think big. You could call it stoner rock, but really that’s only part of the story, as the layers of gnarly grunge, psych and classic rock in Youth Of Dissent attest.

Chiefly informed by 90s grunge rock (think Soundgarden, Nirvana, Stone Temple Pilots, Pearl Jam…) and heavy proto-metal from the 70s (Black Sabbath being the most pronounced influence) theirs is a sound that feels urgent yet classic, realised through vintage equipment. Despite their clear influences, 1000mods again showcase their originality with some of their best riffs to date.

Lyrically it’s inspired by personal experience and politics – the Greek financial crisis hit not long after they formed – resulting in songs you can think and lose your head to.

“Sometimes you find yourself trapped in an inevitable dead-end situation,” the band commented, following the release of brooding recent single Mirrors. “Walls become mirrors with frightening reflections. Depression is a major disorder and must be dealt with as such. Do not be ashamed to reach out for help when bad thoughts swallow you whole.”

Now boasting millions of streams and fans worldwide, 1000mods have raised their game with Youth Of Dissent – a heavy, fiery fusion of commanding tunes, punchy riffs and beefy psychedelia, calling to mind All Them Witches in killer highlight Pearl. By turns biting and woozy, sharp and spaced-out, it’s the sort of music you could imagine Soundgarden making, if they’d got stuck in a desert with loud guitars, a chainsaw and big bag of psychedelics.

It all began in the small Peloponnseian town of Chiliomodi – ‘Chilia’ meaning ‘1000’ in Greek (hence the name 1000mods). Friends since childhood (drummer Labros and guitarist George met as three-year-olds), the four of them came together as a band in 2006, united by a love of heavy rock’n’roll from Motorhead, Black Sabbath and MC5 to grunge heavyweights and the desert rock likes of Kyuss.

Lo-fi beginnings in smoke-filled basements gradually led to bigger things, including a move to the capital of Athens. There they established themselves as kingpins in the city’s burgeoning underground rock scene. But their outreach quickly began to look more global.

In 2010 they teamed up with Portland producer Billy Anderson (known for his work with Sleep and Neurosis) to record their debut album Super Van Vacation. Heavy as hell but monstrously groovy with it, it’s been called a “worldwide heavy/stoner rock classic” and a “game-changer” for Greek music – with over ten thousand sales to date.

2014’s Vultures further cemented their growing reputation, as did 2016’s Repeated Exposure To… – check out the propulsive likes of hit single Electric Carve. But it’s on Youth Of Dissent that their capacity for compelling, world-class hard rock really shines through. One thing is for sure – 1000mods are not resting on their laurels or playing safe. Youth Of Dissent is by far their most radical departure from their previous sound, and all the better for it.

It’s the kind of rousing, enveloping sound we could all use a bit of right now, in these strange times.

“Let the power of music and your beloved ones be your remedy,” say the band. “Stay safe!”