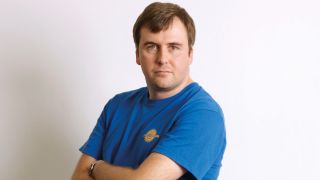 Going into the 90s, what did you expect from it?

“Well I joined the band in 1989, and to be honest we didn’t have any expectations. All I wanted us to achieve was to do something to the best of our abilities and not be a carbon copy of other bands.”

How about on a personal level?

“I thought, ‘This is great! I get to tour for a few years!’ Little did I know we’d be sitting here nearly 30 years later still talking about it.”

Where did Napalm Death fit in the music scene in those days?

“We were still finding our own feet as a band. We were thinking, ‘What are we going to do? How are we going to carry Napalm forward and keep the sound of the band moving?’ There really were no outside influences. We never looked over the garden fence, we were very single-minded about it.”

How hard was it to be an extreme metal band during the 90s?

“The mid- to late-90s were pretty tricky. You could go to some places where you’d previously got a good crowd and there would be 20 people there. We would never give less than everything we’ve got, but in the back of our minds we were worried. We just tried to plough through.”

As a politically aware band, how did you feel about the rise of New Labour in the 90s?

“I understood it, but there was a huge separation in Labour at that time. They weren’t pushing as much equality as they could have, so that was pretty disappointing. The whole ‘Cool Britannia’ thing was bollocks. Flags have never meant anything to me. It’s about people, and if people are still suffering that’s what matters – flags and symbolism are meaningless. It’s happening now and it was happening then as well.”

Did you ever imagine back then that you’d be teaching a former Labour leader how to sing one of your songs on Radio 2?

“Well, just to say for starters, that Ed Miliband was actually a very pleasant man. He was genuinely interested in the band and we all found him to be an incredibly nice man. Could we ever have expected that? Not really, but it’s the sort of thing, along with Glastonbury, that we are more likely to get asked to do these days. Those avenues really were just closed off to us in the 90s. So I think that’s a positive thing.”

What is the album that best sums up the 90s to you?

“I’d have to say that one was the first Today Is The Day album [Supernova, 1993]. We all thought that was a really interesting mix of noise, sludge and alternative rock.”