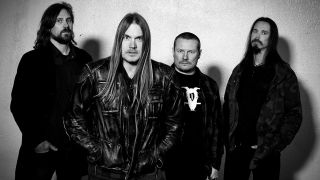 He’s also the subject of the latest album from Sarke - the band formed by the eponymous Khold and Sarke drummer and featuring Darthrone’s Nocturno Culto on vocals. Released on March 11 via Indie Recordings, Bogefod proves that there are many more permutations of gristly and stripped down extreme metal yet to be unearthed, its nine tracks ranging from the scythe-swinging blackened stomp of opener Taken, through the punk-stained friction burn of Blood Of Men, the doom-laden Barrow Of Torolv, sounding like its namesake slavering over its prone, latest meal, to the elegant, operatic strains of Dawning and beyond.